A ballad of empathy 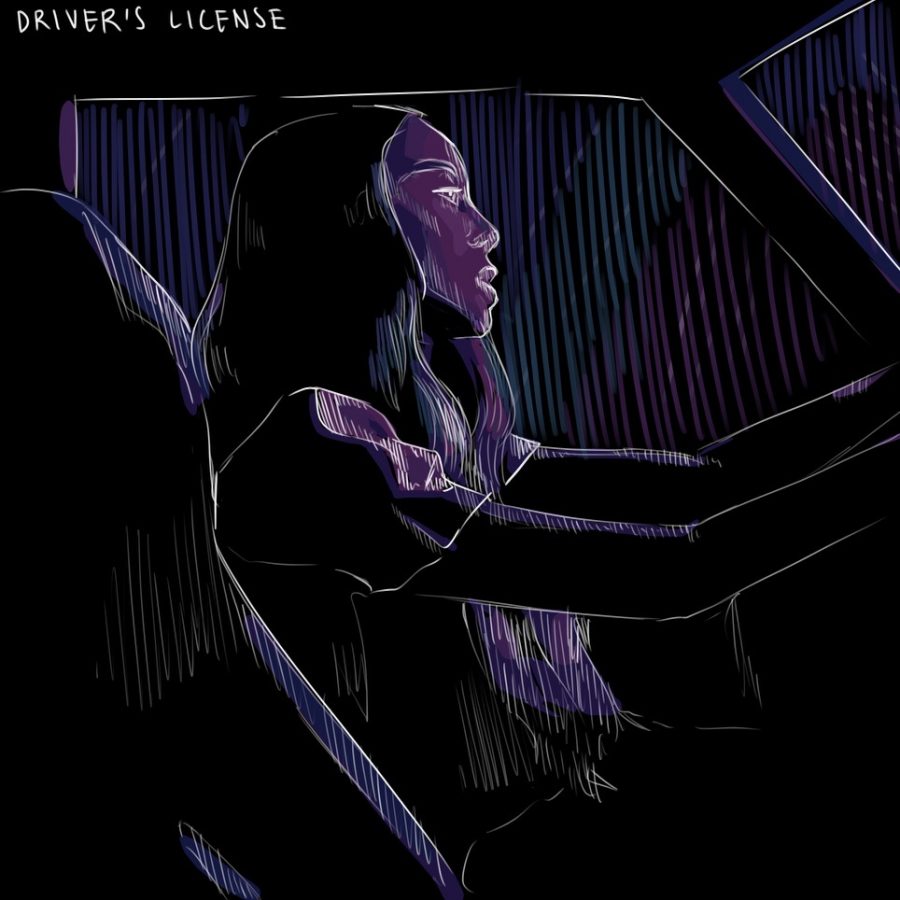 In the face of the pandemic, Rodrigo appealed to a listener's heart with her exploration of loneliness and hardship. “Drivers License” has opened up what the music industry could have in stock for audiences in 2021: not only how artists can market their music, but also how they can speak to their listeners.

Along a sleek and quiet road, a girl drives past empty fields in her small white vintage Mercedes car. Illuminated by soft purple light, she begins to sing a song of love and loss, of heartbreak and healing. Chords hum in the background, carrying her gentle voice through the night.

This is the opening scene of the music video for 17-year-old Olivia Rodrigo’s debut single “Drivers License,” which was released on Jan. 9.

Malar Bala (11), a violinist who plays in the upper school orchestra, felt a connection with Rodrigo because of her young age. Malar appreciated her ability to write about heartfelt and vulnerable moments.

“Just someone our age who has lived life the way that we have and wrote a song that has touched so many people is really inspiring,” Malar said. “ I consider myself a musician just like Rodrigo, but I think it takes time to get to that point [of] putting a song and your heart out there, which takes an amazing amount of courage.”

“According to a statement Rodrigo made about the song on Genius.com, the song details her personal experience with a recent heartbreak. Softer lines such as “you said forever, now I drive alone past your street” speak to the difficulty and loneliness that can come with a breakup.

In addition, as stated in the opening line for the song, “I got my driver’s license last week,” Rodrigo recently received her driver’s license, allowing her to make use of a car and license as a symbolism of freedom and growth. Writing the song along with her producer Dan Nigro gave Rodrigo the opportunity to make sense of her emotions and document them with her voice.

The song gained almost immediate popularity, reaching No. 1 in the U.S. across Spotify, Youtube and Apple Music and staying No. 1 on the Billboard Top 100 for the past four weeks. On Spotify, “Drivers License” broke the record for the most streamed song in one week. Rodrigo also turned to television, performing the song live for the first time on Feb. 4 during “The Tonight Show Starring Jimmy Fallon.”

In the face of the pandemic, Rodrigo appealed to a listener’s heart with her exploration of loneliness and hardship. “Drivers License” has opened up what the music industry could have in stock for audiences in 2021: not only how artists can market their music, but also how they can speak to their listeners.

“Here we are, almost a year into this pandemic,” Jennifer Sandusky, upper school vocal teacher, said. “This is a song about unrequited love, but I think anybody can listen to that song and empathize with this person because everybody feels so isolated right now.”

Sandusky wants other artists to similarly begin this transition from these expressions of loss to expressions of ingenuity and ambition, collecting their fears but channeling them into hope.

“For me, this song was more like a cathartic song,” she said. “I’m hoping that artists moving forward into 2021 will start taking it to the next step after catharsis: How do we inspire and how do we move forward.”

Katherine Zhang (‘19), who posts song covers on Instagram and has worked on writing her own songs, was drawn to the melody of the piece. She related to and was inspired by the song, applying it to her own songwriting technique.

“I think the rhythm is really great: the structure from verse to chorus, verse to chorus, and [how] she starts off the chorus pretty softly, going up into the upper range of her voice,” Katherine said. “After I listened to this song, I just wrote almost an entire song in a day. The important thing for me is that it resonated with me enough that it inspired me to start writing again.”

Malar, who has also dabbled in songwriting, and friend Anya Warrier (11), run “Getting in Tune,” a music podcast that features small artists. Malar believes that the pandemic has allowed smaller artists such as Rodrigo to have an opportunity to expand their platforms and gain popularity.

Rodrigo, who grew up in Temecula, a city in southern California, has been involved in singing and acting ever since she was six. Over the years, she started performing at school, in commercials and in front of audiences, before landing her acting roles.

Rodrigo began as a Disney channel actress in shows such as “Bizaardvark” and “High School Musical: The Musical: The Series,” garnering a fan base that followed her songs, such as “All I Want,” which were released for the show’s soundtrack.

Although there has been speculation that the song refers to a relationship between Rodrigo and Joshua Bassett, her co-star in “High School Musical: The Musical: The Series,” she believes that the story behind the song is the “least important part.” As fans began to try to uncover the autobiographical nature of the song and connect it with Rodrigo’s private life, the song continued to gain additional spotlight.

“We can’t really ignore the fact that people were also personally invested because they knew that this song was likely going to be about Joshua Bassett and about their relationship, Katherine said. “There was that sort of hype, but I think when it came out and people listened to it, it blew up from there [because] of the simplicity and universality of the song.”

Although Sandusky had not initially heard of “Drivers License” when it was released, she believes that part of the reason the song was able to gain so much attention amongst teens was due to marketing on online platforms such as Instagram and TikTok.

“She used social media in a way that quite frankly, young people intuitively know in a way that older people don’t,” Sandusky said. “As a result, it really played well. Social media is really under fire these days for a lot of things, but for artists today, they have to know how to leverage social media to their benefit in order to grow or to get out there.”

Rodrigo’s song has become an internet phenomenon, inspiring creators on Tiktok to write their own lyrics in response to the song and create challenges under the hashtags “#driverslicense.” One challenge was inspired by the music video and depicts creators singing the verse and falling back on their bed, just as Rodrigo does so during the beat drop that begins the song’s bridge.

Creators have also taken on the roles of different points of views of characters alluded to in the song, curating sarcastic, humorous and even heartbroken lyrics to portray the blonde girl, the boy who broke her heart or even the person driving behind Rodrigo.

Katherine appreciated how light the song was on background music and sound production, allowing Rodrigo’s voice to shine through and convey powerful and emotional depth.

“It’s her voice and a piano, and that’s pretty much it for most of the song,” Katherine said. “I think a lot of music we listen to nowadays has a complex storyline or complex visuals or fancy collaborations, but this song just has that factor where you just really want to replay over and over again because of the emotional release from it.”

Producer and singer Ayan Nath (11) similarly noticed that, rather than relying on autotune, Rodrigo conveys emotion through a simple set of chords and the depth of her voice; her live vocals sounded professionally recorded.

“It is a very stripped down folk type song, kind of like a Taylor Swift [song],” Ayan said. “And that’s like a contrast to right now: a lot of [current] music has synthetic sounds, but in this song, everything sounded like she was recording as if she was in a studio.”

Rodrigo frequently posts her appreciation for singer-songwriter Taylor Swift, even calling her “mom” on her Instagram when wishing her a happy birthday. Rodrigo’s music has been deeply influenced by Swift, and she often refers to her as a source of inspiration. And when two songs from Swift’s album “evermore” and “Drivers License” shared a space on the Top 10 U.S. iTunes Chart, Swift commented how proud she is of Rodrigo.

Ashley Ma, (10) who enjoys Swift’s music, found a similar beauty in Rodrigo’s single. She was excited by the way “Drivers License” drew influence from Swift’s music while still retaining its more unique aspects of pop. Having followed Rodrigo for a long time on her social media, where Rodrigo often releases teasers of upcoming songs, Ashley found listening to “Drivers License” and watching the music video an enriching and powerful experience.

“Maybe it’s just the way it starts with like that one b-flat, that one pedal tone, [but] listening to it for the first time was just euphoric,” Ashley said.