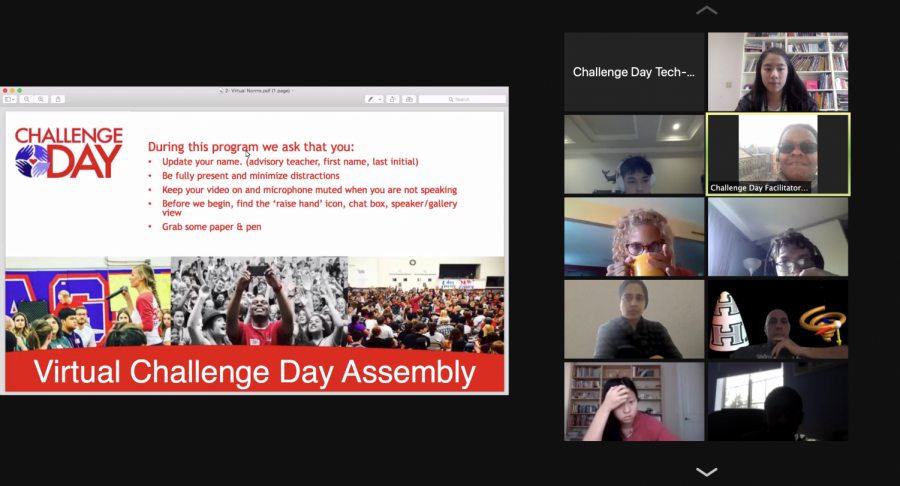 Nearly 900 upper school students and faculty attended a Challenge Day assembly over Zoom on Monday to learn about the importance of empathy and awareness in the community. Challenge Day is a nonprofit working to bridge differences and build compassion in communities.

by Lucy Ge and Anna Vazhaeparambil

Nearly 900 upper school students and faculty attended a Challenge Day assembly over Zoom on Monday to learn about the importance of empathy and awareness in the community. Challenge Day is a nonprofit that works to bridge differences and build compassion in communities.

The event included several activities within the two-hour period: participants answered “would you rather” poll questions, listened to the Challenge Day facilitators share their personal stories, raised their hands to a series of prompts — a spin-off of the traditional “cross the line” exercise — and offered their own reflections.

“I would say the most memorable activity is the ‘raise your hand if you..’ one, where you got to see just how many people [have] the same issues that you do,” upper school English teacher Ohad Paran said. “Especially when you see everybody on the same screen, and people raising their hands, you can see that we have a lot in common, even if we might seem superficially very different.”

This was the first mandatory Challenge Day, which resulted in a greater number of attendees. During the event, facilitators challenged community members to write a letter to someone in the school and take the time to reflect on their own personal goals for the year.

“I feel like a lot of people aren’t really talking about what they’re going through in reality,” Rohan Thakur (11), who also attended the student leader Challenge Day event on Aug. 10, said. “I thought it was a great event to at least force ourselves to think introspectively on how we’re doing and evaluate what we can do to make our own lives better. It also forced ourselves to think about other people, and it seems like we’re losing that in quarantine.”

Throughout the event, students and faculty used the Zoom chat feature to send messages of comfort and support to those who chose to share their experiences and be vulnerable.

“It was a really good space for people to share,” Laurel Davies (9) said. “Just having people be okay with talking about themselves, I felt like that brought everyone closer in some small way.”

At the end of the meeting, attendees flooded the chat with messages of appreciation for others. Some also chose to verbally thank those who had made a positive impact on their lives.

“It’s time for us to be more of a community,” head of upper school Butch Keller said. “You know, sometimes we’re all in this for ourselves. And that’s not the way we need to be. By helping somebody else be strong, you’d become stronger, right? And I hope that that’s what we took away from [Challenge Day].”