Abbie Blenko cares for her community and expresses herself through music 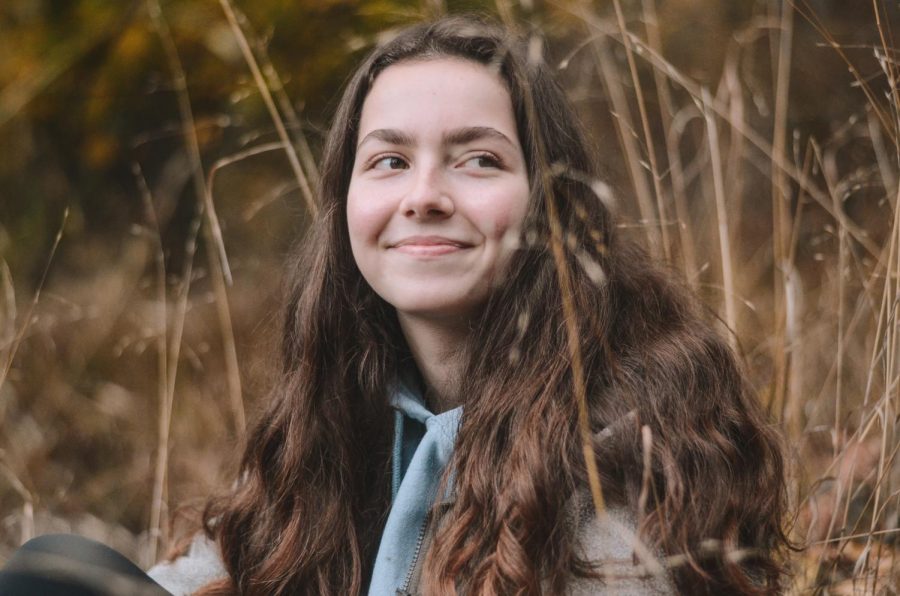 “[Music] really helps unite people. There's just something really wonderful about how you can preserve that sense of humanity and connection. Even if the person who wrote or performed the music that you're listening to … is disjointed with you on your world views, you can still form this extremely personal connection with them,” Abbie Blenko (12) said.

by Anika Mantripragada and Julie Shi

Sitting on the piano bench in the trailer next to Dobbins Hall, Abbie Blenko (12) rests her fingers on the faded, white piano keys, unsure of which song to play. She asks a friend who walks in to name a piece and replicates the tune immaculately. The music fills the trailer, leaving her friend in awe.

“She’s one of those people that can [replicate] any song. You tell her something, you give her a rhythm or beat, and she can just play it … She is an incredibly talented musician,” close friend John Lynch (12) said.

Many of Abbie’s friends and teachers describe her as kind, loyal and passionate. They admire her ability to take leadership and willingness to care for her community.

“[Often] times it’s the quiet people who will be the most loyal, the most honest, the most thoughtful. And Abbie is one of those kinds of people. You would want her as one of your best friends,” vocal music teacher Susan Nace, who has been teaching Abbie since her freshman year, said.

Abbie’s life centers around music: she leads Cantilena, the school’s advanced classical all-treble ensemble. She also plays the piano, studies conducting and composes impressionist music, focusing on emulating an environment instead of a specific emotion or story.

Abbie draws inspiration from nature when composing her impressionist pieces. She especially finds motivation in the beautiful, natural scenes that she has seen from her time at the Walden West summer camp, where she served as a counselor for the past four years. Not only does Abbie take inspiration for her compositions from the captivating scenes of the wilderness that surrounds the camp, but she also appreciates meeting new people from Walden West’s community. As a counselor, she holds activities such as hikes, visiting the nearby creek, and archery. She enjoys listening to her campers’ various enthralling stories and experiences from their different backgrounds.

“[Walden West is] a really supportive place. It’s a lot more diverse than Harker since people aren’t necessarily all focused on the same exact goal, so it’s interesting to get perspectives from people who see the world very differently,” Abbie said.

Keeping in mind the scenes of Walden West, Abbie composes her pieces, jumping around from bursts of creativity at a time and sudden inspiration to multiple long days of brainstorming. She is very open-minded in her practice and composition of music, which is important to both the type of musician she has become and the pieces that she has produced.

“She really puts so much effort into [music] … She practices pieces that she’s not even going to perform. She just practices them for fun because she actually enjoys the music outside of music classes,” close friend Chloe Affaki (12) said.

Abbie’s experience of playing and creating music feels “almost magical” to her. She cherishes seeing how her pieces can influence the lives of others and how she can express herself in impactful ways through music.

“I feel really at peace, but at the same time, sometimes the music that you’re listening to or practicing is super intense in some way … It’s this expression of super raw emotion from the composer that can affect you. It’s not always a happy thing, but I think it is always beneficial. It can help open your eyes to how you’re feeling about your own life [and] your own experiences,” Abbie said.

Music also ties into more than performing arts. In particular, Abbie is interested in studying the connection between music and politics through the interpretations of the lives of various musicians. These composers incorporated their political views of their time into their compositions of music.

Abbie believes that music has a strong influence over political and social dynamics, with its almost ethereal quality of allowing individuals to express their emotions and perceptions of the world in a powerful way that words alone cannot achieve. She believes that, as a result, music plays a large role in the connection of people in society, not only through their political views but also in the relationships they hold in their daily lives.

“[Music] really helps unite people. There’s just something really wonderful about how you can preserve that sense of humanity and connection. Even if the person who wrote or performed the music that you’re listening to … is disjointed with you on your world views, you can still form this extremely personal connection with them,” Abbie said.

Abbie believes that political standings or familiarity with another individual are both factors that a connection through music can override. Whether the other person is a stranger or a close friend, music still can leave a strong impact on both parties. Abbie firmly believes that fostering these connections with one another is essential, especially in this day and age. One of the important values that Abbie lives by is the ability to listen to others and to be able to understand their differing perceptions of the world.

“It’s so crucial to be willing to just listen to other people. Even if you’re morally almost repulsed by what they have to say, I think it’s essential to building your understanding of the world,” Abbie said.