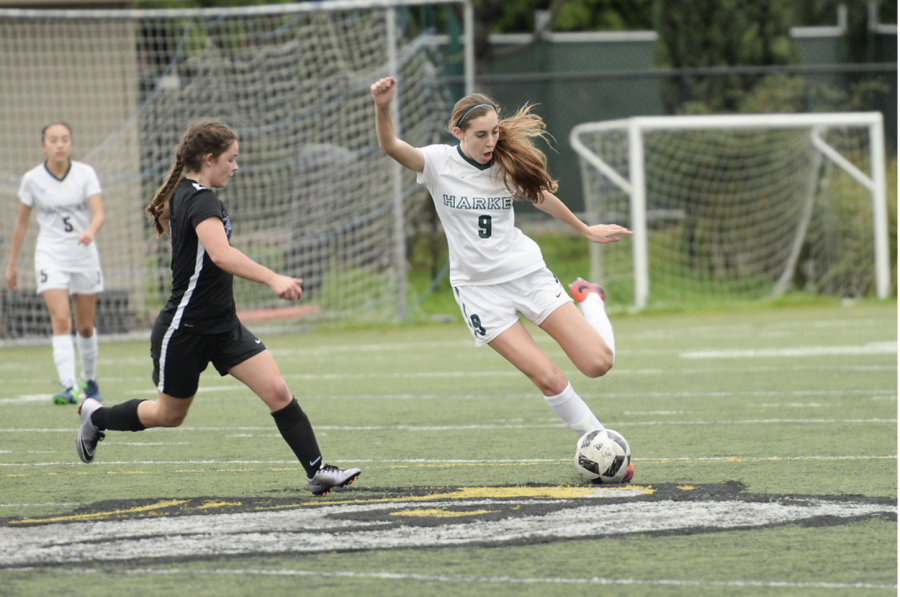 Joelle Anderson (‘17) was drafted 26th overall by the Houston Dash in the 2021 National Women’s Soccer League (NWSL) draft. After scoring 101 goals during her Harker soccer career, Joelle went on to play Division 1 soccer at Pepperdine University, where she started as a midfielder/forward for the Waves for three years.

Before attending Pepperdine, Joelle played on the varsity girls soccer team for three years, accumulating the second-most career goals in Harker history. After committing to Pepperdine at the beginning of her sophomore year, Joelle went on to become the team MVP and was named the WBAL forward of the year twice. She also played for the De Anza Force soccer club, helping her team win seven NorCal State Cup Championships.

“I will always be grateful for getting the opportunity to play soccer during my time at Harker because it allowed me to grow as an athlete,” Anderson said. “Harker offers its students tremendous athletic programs, and I was fortunate enough to have amazing experiences on both the soccer and basketball teams.”

Upper school athletics director Dan Molin praises Anderson for her humble nature and her ability to inspire and bring out the best in her teammates.

“[Anderson] was always clearly the best player on the team from her freshman year forward, but she carried herself with humility as she truly enjoyed playing for her school. Many club players chose to only play for their club, but Joelle played for her school with pride in addition to club,” Molin said. “She made others around her better, and her teammates appreciated her talents and worked harder as a result.”

During her time at Pepperdine, Anderson scored 21 goals and racked up 13 assists, making the All West Coast Conference (WCC) as a junior and All-WCC second team in both her freshman and sophomore years. She is the seventh player all time from Pepperdine to be selected by the NWSL, which was founded in Nov. 2012. Currently ninth in the Pepperdine career scoring list, Anderson will look to continue her outstanding play once her senior season starts in early February, after being delayed due to COVID-19.

“The journey from club and high school soccer to playing in the NWSL has been a wild ride. It has always been my dream to play soccer at the professional level, and I kept working towards my dream until it became a reality,” Anderson said. “My journey has had its highs and lows, but I think I learned the most from the obstacles I experienced. Personally, it is truly rewarding to see all of the countless hours of hard work and dedication over the past [ten plus] years pay off in the end.”