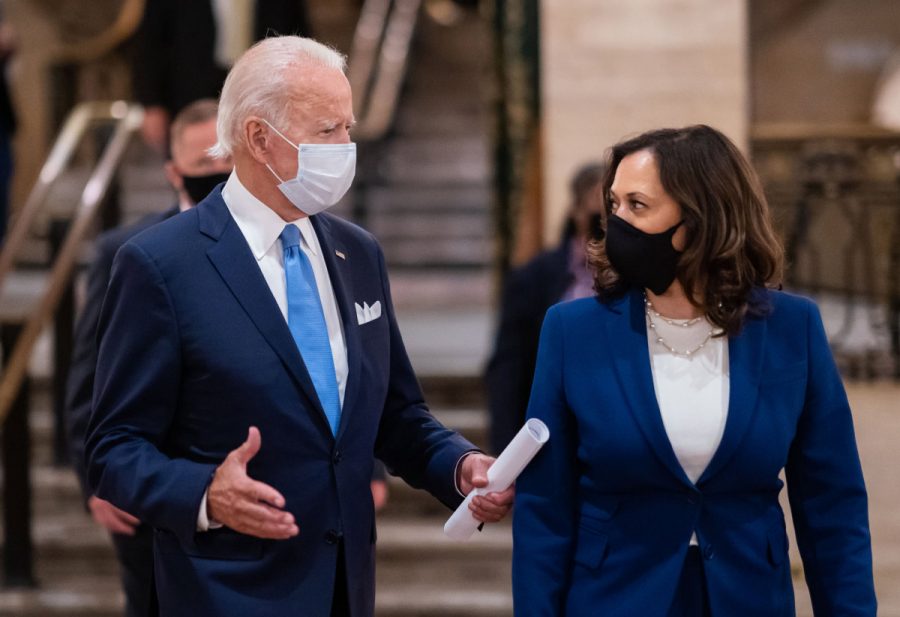 Joe Biden was sworn in as the 46th president today. His vice president, Kamala Harris, made history by becoming the first woman and person of color to hold the office.

Wearing a Ralph Lauren suit in his signature campaign color of navy blue, Joseph R. Biden, Jr. stood today in front of the Capitol where, just two weeks ago, protestors seeking to undermine democracy violently stormed the Capitol building. Facing a limited crowd and a sea of American flags on the National Mall, Biden delivered some of his first words as the 46th president of the United States: “This is America’s day. This is democracy’s day.”

President Biden signed over 17 executive orders that dismantled policies central to former President Trump’s legacy, just hours after he and Vice President Kamala Harris were sworn in at the inauguration ceremony this morning.

“What I’m most hopeful [for] is a change in tone and a sense of working on a common problem, the coronavirus [pan]demic, and addressing those problems. Just a more positive tone, and a sense of, we’re doing it, we’re working on it,” upper school history teacher Byron Stevens said.

Through his executive orders, Biden will be requiring masks in all federal buildings, rejoining the World Health Organization and the Paris Climate Agreement, instating a temporary moratorium on new oil leasing in the Arctic National Wildfire Refuge and ending the ban on Muslim travelers to the United States, in addition to other executive orders on student debt, the border wall, the Deferred Action for Childhood Arrivals (DACA) program and housing foreclosures.

“It was super rewarding to finally see someone who looks like me represented in such a powerful position and leading our country,” Nageena Singh (11) said in an email interview.

In her first act as vice president, Harris swore in Sens. Raphael Warnock (D-G.A), Jon Ossoff (D-G.A) and Alex Padilla (D-C.A.) today, resulting in a 50-50 split in the Senate between the Democrats and the Republicans. With Harris’ able to exercise her right to a tie-breaking vote as President of the Senate, Democrats now have control of both the Senate and the House of Representatives, paving the way for Biden to more easily enact his progressive agenda.

In the days following the Capitol attack on Jan. 6, many people, including members of the Harker community, felt anxiety and unease about possible complications with the inauguration, which went as planned without any security threats.

“I’m very glad that nothing [bad] happened at the inauguration,” Emmett Chung (10) said. “This is a new [kind] of politics, maybe back to the kind of boring politics it’s supposed to be. I’m glad that this is a sort of turning point, and we know that politics can be normal again.”

In his inaugural address, Biden called for unity and a fresh start from the current political division while promising to be a president for “all Americans.” He also referenced some of his policy initiatives, including healthcare for all, racial justice, increasing school safety and making America “once again the leading force for good in the world.”

“This is our historic moment of crisis and challenge, and unity is our path forward,” Biden said in his speech. “We must meet this moment as the United States of America.”

The president addressed a limited crowd with a sea of flags standing on the National Mall in lieu of the American public. Due to the insurrection on the Capitol, 20,000 National Guard troops were deployed to Washington to keep the peace and prevent any acts of violence. Due to both safety and pandemic concerns, citizens were encouraged to watch the inauguration virtually instead of in-person.

Biden will be facing a historic set of challenges as the new president, including an extreme political divide as highlighted by the Capitol attack, a pandemic that has taken over 400,000 lives in America, continued racial injustice, a battered economy and the worsening effects of climate change.

Over the course of his first 100 days, he plans to mobilize personnel to administer 100 million COVID-19 vaccines, open most U.S. schools, pass a $1.9 trillion economic relief plan and introduce a new immigration proposal with a direct pathway to citizenship.

After taking the oath of office, Biden and Harris participated in the traditional Pass in Review of the U.S. military troops, visited Arlington National Cemetery to honor fallen veterans and received a presidential escort to the White House. A virtual parade, called the “Parade Across America,” took place instead of the usual in-person one, featuring an array of groups and individuals, including Olympic athletes and marching bands.

Former presidents Barack Obama, George W. Bush and Bill Clinton attended the inauguration in a show of solidarity for the new administration. While Trump did not attend, former vice president Mike Pence did. The new Democratic majority Senate will meet soon to hold Trump’s second impeachment trial after he was impeached by the House of Representatives last Wednesday for “incitement of insurrection.” If the Senate votes to convict, Trump will become the first president convicted in American history.

Keeping with the tradition of confirming a new administration’s top national security officials on Inauguration Day, the Senate confirmed Avril D. Haines as the Director of National Intelligence in an 84-10 vote.

Though it is currently unclear when the Senate will vote to confirm the rest of Biden’s prospective Cabinet picks, his administration has pledged to appoint “leaders of government agencies that reflect the country they aim to serve.” Including Harris, half of Biden’s 26 Cabinet-level nominees are people of color, making it the most racially diverse Cabinet in U.S. history.