Humans of Harker: Behind the scenes

Angela Cai values the anonymity and fulfillment of technical theater 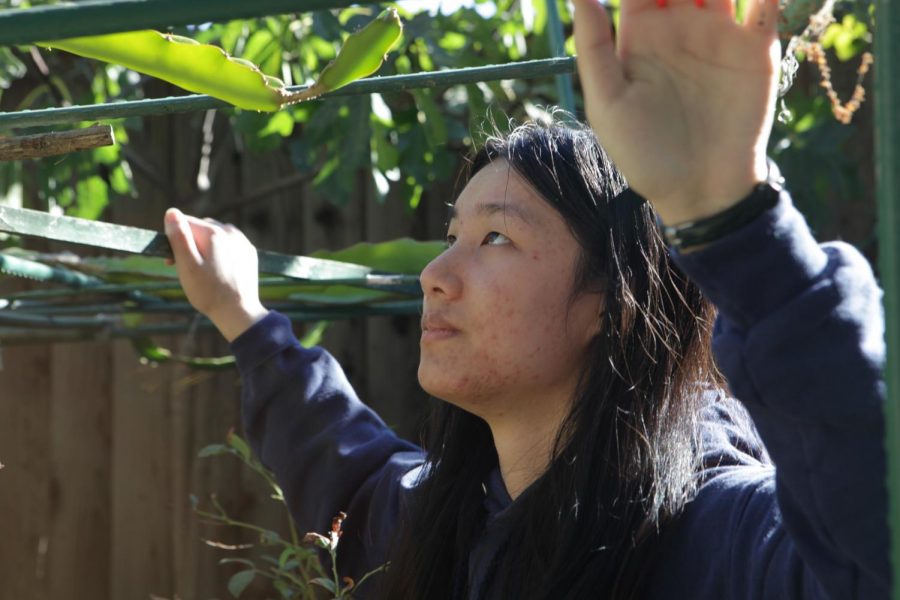 “When I do things, I’m not really thinking about credit in general. Sure, it’s cool to be recognized, but I’m not the type of person who wants to be a celebrity with their name everywhere. I like anonymity. I personally know that I’m important in some way and that’s enough for me,” Angela Cai (12) said.

Scene changes don’t happen on their own. Neither do the lighting choreography or audio setup or the development of onstage props. Most shows cannot happen successfully without the diligent students dressed in black, waiting backstage and working behind-the-scenes. Angela Cai (12) is one of these students, and she has an appreciation for what she does.

Angela does not only work in tech theater; she has taken acting classes and performed in school plays as well, fully encompassing many aspects of the theatrical arts. Since freshman year, Angela has participated in technical theater and production classes. First taking the technical theater elective, she gradually became interested in performing arts. In her sophomore and junior years, she worked as a crew member and even operated the lightboard, which has been one of her favorite experiences. Despite her ample involvement, her main interest in production stems from technical theater.

“It’s fulfilling … Even if the audience doesn’t know you’re there and they’re just like, ‘Wow the acting is good,’ I’m pretty sure the show wouldn’t be able to function without the tech theatre,” Angela said.

Angela doesn’t necessarily need fulfillment to enjoy tech theater, even though she has acted in school plays. With the self-confidence she has developed over the years, Angela bases her actions on what she believes is valuable.

“When I do things, I’m not really thinking about credit in general. Sure, it’s cool to be recognized, but I’m not the type of person who wants to be a celebrity with their name everywhere. I like anonymity,” Angela said. “I personally know that I’m important in some way and that’s enough for me.”

Upper school production manager Brian Larsen, who has known Angela since her freshman year, appreciates the talent that she brings to the productions as well.

“She’s very attentive. She pays good attention to detail. She’s responsible, and those things–being attentive and being responsible–are hugely valuable to my world. So she’s somebody you can count on and depend on getting the job done,” Larsen said.

Angela’s attention to detail and ability to work behind-the-scenes contribute to her passion for robotics as well. Since her freshman year, Angela has been part of the electrical sub-team of the Robotics Club, and she has worked for long periods of time helping other members debug code and physically build the robot, all of which has helped her acknowledge the amount of work that goes into a single competition behind-the-scenes.

Vivian Jin (12), who has been one of Angela’s close friends since they first met in kindergarten, admires her passion for the activities that she does.

“[Angela] really sticks to her own interests and stands by them … I would call her very loyal and firm in terms of what she knows. She really knows what she wants,” Vivian said. “I really admire her independence, fearlessness [and] resourcefulness.”

Vivian also values Angela’s kindness and acceptance of all the people around her over the years. Angela keeps the mindset of never judging others before understanding their actions and personality better.

“There’s not really a reason to judge people in the first place. I don’t know anything about them and it would be better to learn about them than to have some preconceived notion,” Angela said.

Besides interpreting people’s personality without judgement, Angela strives to remain level-headed in all situations, seeking to understand the reasons behind someone’s actions and see their point of view. Her goodwill and consideration overall also flows from her life of being an older sibling to a younger brother and sister.

Like with performing arts, Angela herself does not need acknowledgement for her kindness and generosity. For her, being caring and sympathetic to others is natural.

“As a person, I definitely try to be nice and kind to other people. I often find myself holding the door open for whatever reason. I do make an effort to help people if I can … I would enjoy it if people did that for me as well, but it’s not like I’m expecting or wanting anything in return. I just do it because I can,” Angela said.

Aside from being kind, Angela’s ability to sympathize with other people and understand their perspectives and positions without judgement also contributes to her patient demeanor.

“I don’t get mad very easily,” Angela said. “It’s because I can also see why the other person is doing what they’re doing, their point of view … [which allows me to] understand them.”

Even though most of the activities that Angela does are anonymous and behind the scenes, her enjoyment for them is palpable. Before school productions, such as the annual fall play or Student Directed Showcase (SDS), or before a robotics event, she feels nervous yet excited as she anticipates the results and everything she has prepared for. Larsen hopes that Angela’s love for these activities will carry out into the future.

“If that’s an interest to you and performing arts is a passion, then continue to pursue that. Find an outlet for that drive … I’m looking forward to her having a robust and successful future,” Larsen said.