Editorial: Striking down the gavel on the First Amendment 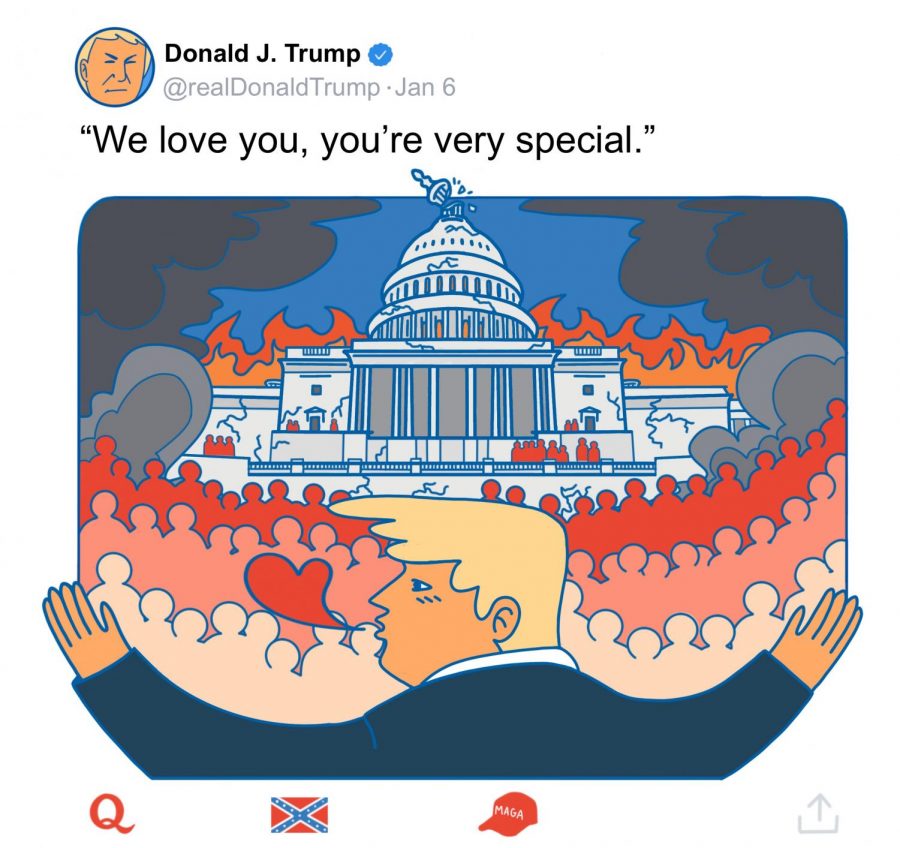 "After a year upended by a relentless pandemic, the violent Capitol attack delivered a gut-wrenching blow to America’s battered morale. It was based in the false imagination of a stolen election, a story strengthened by those in public office who promoted the narrative and backed Trump in his disturbing rhetoric."

In a survey sent out to members of the Harker Journalism news staff, 100% of the 27 respondees indicated that they agreed with the stance of this editorial.

After four years of acting as a megaphone for misinformation from President Trump, Twitter permanently banned his account on Friday “due to the risk of further incitement of violence.” Numerous other social media platforms, including Facebook and Instagram, also took the initiative to restrict or suspend Trump.

We support their decision to mute Trump’s platform, which he has used to promote incendiary ideas.

On Wednesday, just three days out of winter break, a sharp jolt interrupted the slow rhythm of the first week back. Teachers ended classes early. History classes erupted with discussions. Seniors working to get their last college applications in fixated their attention on the news instead: Trump supporters, incited by the president undermining the integrity of the election, breached the Capitol and various state capitols, including California’s.

After a year upended by a relentless pandemic, the violent Capitol attack delivered a gut-wrenching blow to America’s battered morale. It was based in the false imagination of a stolen election, a story strengthened by those in public office who promoted the narrative and backed Trump in his disturbing rhetoric.

Just as how we have leaned on each other throughout the pandemic, our community sent out messages of encouragement and affirmation – and we must continue to lean in to process these events together.

On Friday, upper school head Butch Keller sent a message of affirmation to students and parents, encouraging students to empathize and support each other. Head of School Brian Yager echoed the necessity of promoting kindness and understanding civil conversations.

The temporary and now permanent suspension of Trump’s account this week moves into uncharted waters since Twitter began labeling his tweets that violated its policies last May.

Tech giants succeeded where the federal government was unable to: establish lasting consequences for Trump’s actions. Despite losing the elections, he continued to broadcast the exact opposite. Denying his loss, announcing false claims about a landslide victory in his favor and refusing to attend the inauguration wore away at the integrity of American democracy.

The sitting president’s words carry the authority to shape our thoughts. When America’s president denies an election result, it generates anger in a number of his followers. When he announced a “big protest in D.C.” in a Dec. 20 tweet, promising that it would “be wild,” it galvanized his supporters to fulfill his bidding.

As Harker students, our honor code upholds the tenet of accountability. As student journalists, we strive to fulfill our responsibility to use our platform to spread corroborated information.

Let’s clear up a perpetuated misunderstanding about “censorship”—Twitter’s ban on Trump’s account does not violate the First Amendment. Freedom of speech prevents the government from censoring citizens, but private companies may employ regulatory measures. This time, the bans come only 12 days prior to the end of the Trump administration. It took deadly consequences to restrict public discourse that influenced the attacks.

Although social media platforms do not escape the responsibility of enabling the organization behind the breach, the ban was a necessary measure to prevent the use of speech from again inciting a panic that led to five deaths.

Building a network of safe discussion is crucial as Inauguration Day looms before us and we brace for more unrest in the weeks to come.

Share your concerns and listen to each other. By responsibly exercising our own rights to the First Amendment, we can remedy the effects of the freedom of speech abused by bad actors.