Humans of Harker: Confidence is key 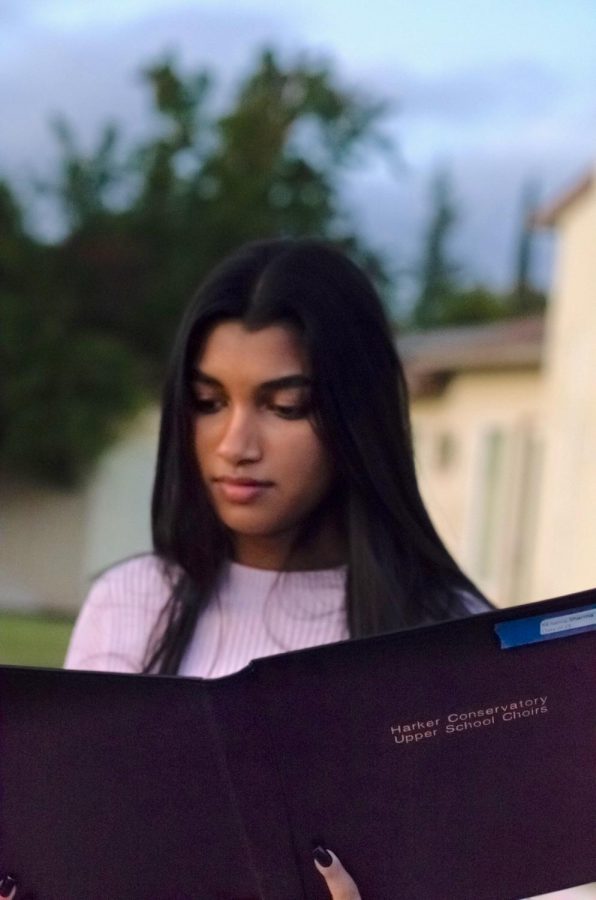 “It's really helpful to understand that the people around you aren't your competition; you are your own competition. [That’s] the only way you're ever going to truly progress in life and become a better version of yourself,” Sarina Sharma (12) said.

Applause rings out from the crowd as Sarina Sharma (12) holds the last note of Titanium by David Guetta and Sia. The previously dark audience slowly brightens as the lights turn on, and Sarina’s eyes widen in awe at the sight of the packed auditorium in Carnegie Hall, slowly scanning over the masses of people seated in rows of velvet red seats.

“[It] was kind of overwhelming in a sense, but in a positive way,” Sarina said, recalling the memory.

Sarina has had an affinity for music ever since she was 3 years old. Some of her fondest childhood memories involve associating music with common household objects.

“When I was little … I would always dance to the vacuum cleaner [because] I thought it was this really cool beat,” Sarina said, laughing. “[That’s when] my parents [thought I] should look into doing music as a hobby.”

Throughout the years, Sarina has strived to become skilled at many facets of music. She began learning piano and singing at 5 years old, and as she got older, she started participating in numerous school performances and even working at a music school.

“I’m not the biggest fan of classical music, per se, but I think it’s really good to be able to be well-rounded in whatever hobby or activity … you’re passionate about,” Sarina said. “It’s good to see all the angles, but I’ve really ended up enjoying choir.”

Another aspect of music that Sarina has become involved with is songwriting. Her favorite part about creating her own music is seeing her peers’ reactions and perspectives to the song.

“I think through music that I write, it’s always really fun to see people’s reactions and how a specific song you wrote about something in your life can totally mean something different to them,” Sarina said.

Whether it’s a personal or international event that’s on her mind, Sarina finds it easiest to articulate her thoughts through songwriting.

“If there’s a specific element in my life … or if there’s something going on in the world that I feel I can use my voice for, oftentimes, I get really inspired,” Sarina said. “I think when I’m inspired, it’s really easy to be able to put my words with music because that’s the best way I know how to express myself.”

Although she has been singing for a majority of her life, Sarina never entered any competitions until a couple years ago. Initially, she was “super hesitant” of her abilities, but with some convincing from her mom, she entered and won the “American Protégé We Sing Pop” competition, allowing her to perform at Carnegie Hall.

“As far as the competition goes, it was all super new to me,” Sarina said. “But I think it was good that it was my first time doing anything like that, because … I went into it with no expectations, and I came out of it with this great experience.”

“One thing I really admire about [Sarina] is how she jumps into things that are totally outside her comfort zone because she genuinely wants to develop a talent or wants to test a skill,” Rees said. “She is not governed by what her friends are doing, she’s not governed by what will be impressive on a resume, she’s totally driven by what she genuinely wants to learn about or grow in.”

Through her experience in the competition, not only was Sarina able to meet fellow singers from all over the world, but she also was able to gain confidence in herself.

“I think for me, it’s super easy to underestimate myself [and] not [feel] validated by the things you’ve been working towards,” Sarina said. “So I feel like that experience taught me to … realize that I am capable of things that I put my mind to, and that there really is no limit to the things that you can achieve.”

Sarina also credits a big part of her confidence gain to her father, who has preached the importance of individuality so often that it’s “ingrained at the back of [her] head.”

“He always reminds me that [my] specific personal journey isn’t the same as anybody else’s,” Sarina said. “It’s really helpful to understand that the people around you aren’t your competition; you are your own competition. [That’s] the only way you’re ever going to truly progress in life and become a better version of yourself.”

Along with learning to realize her potential as a musician, Sarina observes her growth during high school regarding her motivation and interest in academics.

“I think I would tell [my freshman self] to try and find the little things that interest you,” Sarina said. “It might not seem like it at the time, but everything that you’re doing is going to teach you something, whether that’s actually the course material or just how to work effectively.”

Close friend Aditi Bharti (12) notes how Sarina’s positive and optimistic personality has affected those around her.

“I know that whenever I’m feeling down, if I just talk to her … that gets me thinking more positively,” Aditi said. “Now I don’t even need to have that conversation because she’s influenced me that much.”

Friend Callie Mayer (11) also recognizes how the carefree aspects of Sarina’s personality have impacted her.

“I think she’s taught me [to] loosen up a little bit,” Callie said. “I think I’m a bit of an overthinker, [and] Sarina is kind of like the comic relief–she has just reminded me to … take a second to laugh or to be silly.”

Although singing is Sarina’s main contribution to the arts, she has also participated in the fall play. One of the reasons she loves performing for people is the feeling she gets from being on stage.

“For me, it’s so much easier to perform in a dark theater in front of a bunch of people because you can’t see them,” Sarina said. “I really like performing [and using] all the energy drawn from the crowd … it gives me a really nice feeling.”

Ultimately, for Sarina, performing her own music is the most intimate and rewarding art form.

“I think singing is a lot more personal for me, just because when you’re acting, you’re pretending to be someone else,” Sarina said. “If you’re singing your own songs, then you’re showing them your voice and what you really think.”