Humans of Harker: The American dream

Ethan Choi unites his community through filmmaking and political activism 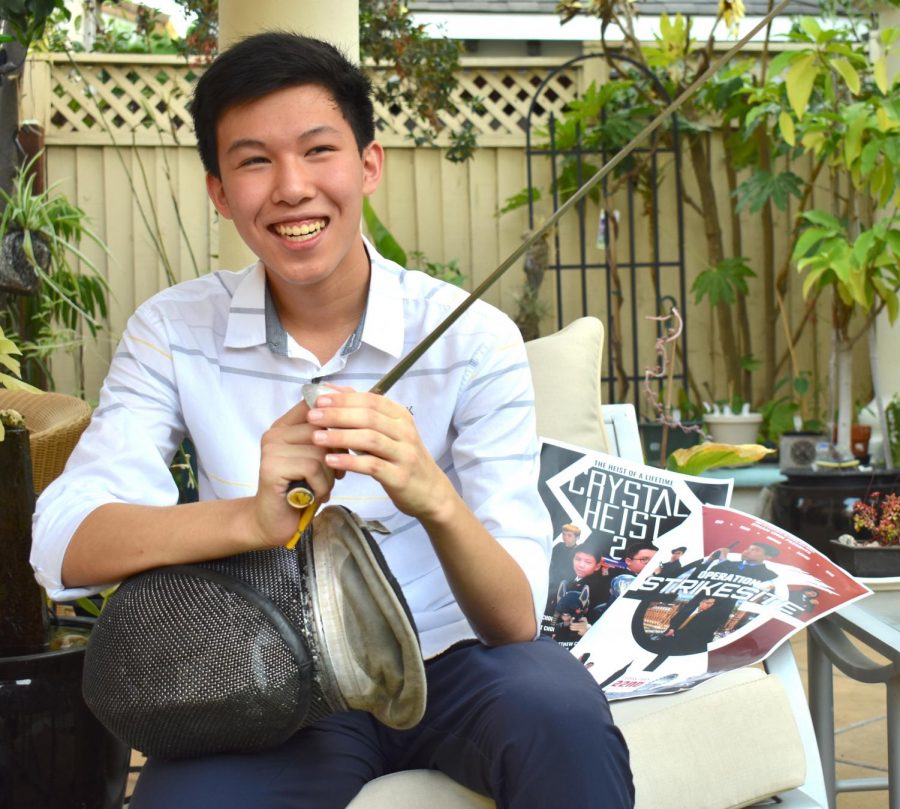 "The biggest underlying message [of my filmmaking is] the message of unity. The films might not be Oscar worthy or cinematic masterpieces, but since it's documented, I think I'm going to have a lot of fun looking back on it and seeing us together and making the film together," Ethan Choi (12) said.

Imagine 20 eighth and ninth graders, dressed in immaculate suits and gathered around a rickety set-up of tripods and iPhones amid the sweltering Fremont heat. They take turns reciting lines, switching from laughing, easygoing teenagers to cool, composed FBI agents with the press of the record button. It’s the summer of 2017, and Ethan Choi (12) is filming his second spy movie.

Fast forward three years and a couple of films later, and Ethan’s smiling as he recalls the controlled chaos of that summer. Though he released his first movie The Crystal Heist a little over three years ago, Ethan has been crafting riveting storylines since elementary school, his boundless creativity the fuel to his imagination. Those skits – which he and his friends performed at school talent shows – later evolved into The Crystal Heist, a 21-minute long movie that Ethan and his cousins produced on a whim during a Chinese New Year celebration at his grandmother’s house.

“I never planned on showing [the movie] to anyone … it was really a way to pass time, to have fun with my cousins and my brother at my grandma’s house that night,” Ethan said.

Just like its production, The Crystal Heist’s premiere was as unexpected. While Ethan was editing a trailer for the movie at the Harker middle school campus, former middle school history teacher and Harker alumnus Karan Lodha took notice, offering his classroom as a makeshift theater for Ethan’s movie.

“What started as a little screening in Mr. Lodha’s room turned into a full-blown premiere in the MPR,” Ethan said. “We ended up almost filling the MPR, and we had over 100 kids show up for the screening.”

Although the film may have been spontaneous, its impact left a deep impression on both Ethan and his community. Close friend Bryan Zhang (12), who acted in the sequel to The Crystal Heist, reflected on the day of the premiere.

“Everyone, whether they knew [Ethan] or not, thought that this was really cool, and everyone made the effort to show up during lunch to watch his movie and everyone knew how much he cared about it,” Bryan said. “That was a really cool moment not just for him and his friends, but for the entire grade.”

Ethan’s movies not only bring audiences together but also unite its cast members. Close friend Olivia Guo (12) recalls her first time acting in one of Ethan’s movies.

“When he asked me to be in his movie, I was like ‘No,’ [because] I was a shy person, so I definitely didn’t want to do it,” Olivia said. “But he actually did persuade me to do it, and it ended up being an activity during the summer that I really enjoyed. I think that shows the kind of person he is because he’s someone who constantly pushes me to be my best self.”

Yet, making films wasn’t always easy. For one, Ethan had never taken a formal class on multimedia production until his junior year, and he used smartphones exclusively for his first few films. On top of technological restrictions, scheduling nine-hour-long film days for 20 busy teenagers was no simple feat.

“It was a learning curve … not only in the world of filmmaking, but being a leader, being able to direct films, organize meetings, bring people together and say, ‘Hey, let’s get this done, we’ve got goals set up, we’ve got a plan, we’ve got a schedule, let’s do this,’” Ethan said. “It’s this weird dynamic, where you’re with your friends and you’re having fun, but when the clock’s ticking, you have to say at some point, we have to get back to the scene.”

Once Ethan showed the film to his peers, the overwhelming amount of feedback he received only fed his determination to create more films. He credits his peers’ unconditional support, from his very first skit to his most recent movies, for being the catalyst to his filmmaking career. Yet, their encouragement pales next to Ethan’s biggest supporter – his grandmother. He filmed his first movie and hosted multiple film-related meetings at her house. She watched Crystal Heist 2 at its premiere in 2017 in the Nichols auditorium. Most of all, her life story – a mother of nine kids and a refugee of the Vietnam War who fled to America where she worked tirelessly to raise money for her family – inspired Ethan to create his own stories of strength and courage.

“Through my upbringing, I’ve learned of [my grandmother’s] story not in the context of her being my grandmother, but almost as if she was a superhero,” Ethan said.

In the middle of the production of his third movie Operation Strikesite, Ethan’s grandmother passed away, a loss that left him struggling.

“I really had to sit down and … reflect about myself … I think the best way to mourn is to do what my grandmother has always done in trying times. It’s just work, work for yourself, but work for others and work for [those] around you and stay strong because of that,” Ethan said. “I really worked through that, thanks to my family, thanks to my friends and the cast of Operation Strikesite.”

In a way, focusing on finishing the movie was a coping mechanism for Ethan. With the help of his Operation Strikesite crew, Ethan emerged with a completed film in February of 2019. At the premiere, Ethan told the story of his grandmother.

The contemplation of his grandmother’s life and her impact on him also pushed Ethan to become more involved in political activism.

“When she passed away, four days later, the Democrats won the House of Representatives. In my darkest moment, thinking about her American story [and] the story of my parents, how they came here with nothing except for the clothes on their backs, not speaking a word of English, were able to … work hard and get good, decent jobs, that’s the American dream,” Ethan said. “And that’s something that I’m really passionate about to fight for, to make sure that everyone has the opportunity for that.”

Now, Ethan aims to honor his grandmother’s legacy through advocating for his beliefs, from interning at the Santa Clara Democatric Party to encouraging his peers to engage with politics during Youth Activism club, which he co-founded in his junior year. Upper school history department chair Mark Janda, who advises Youth Activism club and has known Ethan since sophomore year, admires Ethan’s balanced approach toward political issues.

“Like any teenager, [Ethan’s] got an appropriate sense of idealism, but he seems to, in a very mature way, grasp the way the world works and what’s possible while still believing that hard work and political engagement can create positive change,” Janda said. “The idealism to make a difference is there, but the maturity to understand the world as it is is also there. And that’s the mark of wisdom.”

As a youth leader in today’s increasingly polarized political landscape, Ethan faces political discourse with an open mind, stressing the importance of listening as opposed to defending or rebuking. He enters political discussions with the goal of finding common ground and bringing people together. This theme of solidarity ultimately stems from his filmmaking, with his movies uniting communities for years to come.

“The biggest underlying message [of my filmmaking is] the message of unity. The films might not be Oscar worthy or cinematic masterpieces, but since it’s documented, I think I’m going to have a lot of fun looking back on it and seeing us together and making the film together,” Ethan said.