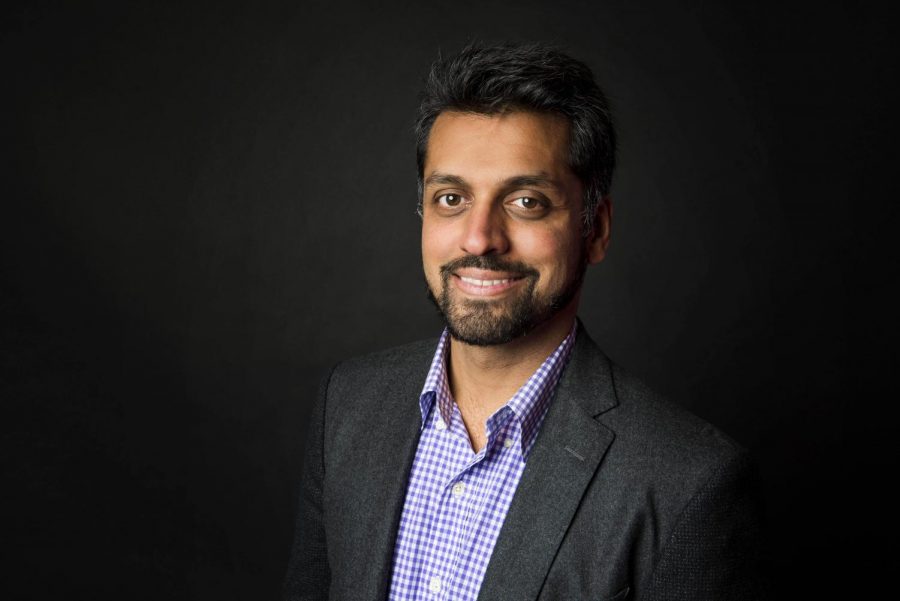 As Wajahat Ali continued on his path of storytelling as a Pakistani-American and Muslim, the lack of representation he has found along the way with has sometimes been difficult to overcome. But because of his love for and his interest in expressing and documenting stories and moments that unveil the richness of the stories of America, he found it fulfilling to keep doing what he does.

Wajahat Ali remembers working on his first short story in Harker’s fifth-grade English and art classroom. His teacher, Ms. Peterson, had instructed him to write a page-long narrative—and Ali’s piece went on for ten pages. When he read his story aloud in front of his class, his classmates laughed at all the right moments, applauding for him at the end. Ms. Peterson encouraged him to perform his piece at the talent show.

“I stood up on the small little stage… I kind of discovered my superpower at that moment,” Ali said.

Years later Ali would become a playwright and journalist, writing for publications like The New York Times, The Atlantic and The Washington Post and sharing touching, witty stories that speak to the diverse and multicultural audience of America.

“I’m turning 40 in three days, and you sit there and you connect the dots,” Ali said. “You look backwards, and you see how certain steps just happened to happen at that moment, which you thought was random, but then they connect to the bigger story.”

Ali attended Harker Academy until eighth grade, and it was at Harker where he fell in love with writing and storytelling. He was always an avid reader and even wrote and directed homemade, ten-minute movies with his friends to show to their families.

But Ali wasn’t always comfortable on stage or in front of a lot of people.

“People sometimes say, ‘Oh New York Times, CNN, your play, you’re writing a book.’ I always want you to know, I was that awkward kid at Harker, who literally could not speak English,” he said. “They put me in ESL in first grade.”

His experience diving into storytelling as a career was natural for him, since he was always very creative during his days at school, but it was not easy to choose this path as a child of immigrants.

Ali defined the typical immigrant experience as one in which the parents leave everything they had in their home country to come to the United States and achieve the American dream. As a result, he notes, the children of these parents hold the legacy that comes with that: needing to establish a community here, raise a family and make money not only for themselves but for their family back home.

But Ali had support from his parents, which made it easier for him to break this mold.

“My parents have always encouraged me. And I realized that makes me very rare as a South Asian kid from my generation,” Ali said. “Afterwards, I asked them [why], and [my parents] said, ‘We knew you. And we knew if we ever forced you to be something you’re not, you would break, you would rebel and you’d be miserable.’”

With the support of his parents, Ali didn’t shy away from what he loved when he attended college. He started to draft his play The Domestic Crusaders, which explored the dynamics of a Pakistani-American Muslim family. He didn’t know that, one day, his play would be published and performed. It would even be reviewed by Toni Morrison.

It was Ali’s short story writing professor at UC Berkeley, Ishmael Reed, who encouraged him to continue working on the play even after Ali had graduated.

From his fifth-grade English teacher at Harker to his parents, the people who have had faith in Ali’s abilities as a writer have made a significant impact on him. Some of those people were Harker students who he grew up with and stayed friends with. The first people who gave him money to fund his play were his friends from Harker.

“Never underestimate the power of a friend or a loved one giving you a bit of encouragement. [this is] all we need to sustain ourselves through what is oftentimes a long uphill journey, especially when you come from certain communities where you’re forced to be a trailblazer,” Ali said. “And not only do you not have any models of success, other people are actively trying to stomp you down, because they think what you’re doing is silly.”

After finishing The Domestic Crusaders, sharing the play with his South Asian community through a dinner gathering and directing the play at Berkeley Repertory Theatre, Ali thought he would become a playwright but faced criticism: America was not ready to hear his story.

“When I wrote that play, originally, people in my own community laughed at me. At the same time in America, people were like, ‘No one’s going to come see a play on brown people,’” he said. “I refuse to whitewash my story. I had faith in the audience. I said, ‘The audience eventually will catch up.’”

It was important to Ali to convey a story that was a rich and honest portrayal of an immigrant family and to speak to the America that contains multitudes of cultures and stories and people.

“My play is not a play about Islam or Muslims in America or even about America. It’s a story of America,” he said, “I’m always trying to be very culturally specific, because I think the universal is often found in the specific and this allows me to put my fingerprints on it.”

After writing his play and hearing the reactions of those around him, Ali decided to step away from his play and attend law school. But right after he graduated from law school, he faced challenges stepping into a career because of the 2008 economic recession.

“I used to ask myself, What’s wrong with me? I’m licensed—I should just become a lawyer. I was supposed to finally achieve my dream. [But I] struggled. I ended up broke in my family home,” Ali said. “And so in that moment of crisis, it presented itself an opportunity where I was like, well, I might as well write something.”

In this trying time, Ali found a paper that he wrote during his second year of law school that discussed private military firms in Iraq, edited it and submitted it to an online journal, altmuslim. He began to write regularly and get his work published. One day, he was invited to give a speech at the University of California, Berkeley, his alma mater, about his experience as a social media journalist.

When he realized that America might elect a Black president for the first time in 2008, Ali believed that America was finally ready for his play. He raised funding for The Domestic Crusaders to be premiered in New York, and The New York Times, The Wall Street Journal and MSNBC all reviewed it.

Ali was able to pursue even more opportunities because of the success of the play and the variety of his online work, such as being able to lead think tank Center for American Progress, pitch a television series to HBO and appear on CNN and Al Jazeera.

As Ali continued on his path of storytelling as a Pakistani-American and Muslim, the lack of representation he has found along the way with has sometimes been difficult to overcome. In the end, Ali’s perseverance kept him going, even when it was difficult, even when he lost everything.

Because of his love for and his interest in expressing and documenting stories and moments that unveil the richness of the stories of America, he found it fulfilling to keep doing what he does.

“Oftentimes, I’ve been the only person of color in these environments in the newsroom, in Hollywood, in the media. And so it’s exhausting,” Ali said. “Because you have to, first and foremost, be yourself. But then you also have to perform these gymnastics to overcome these subtle, invisible hurdles that exist about you before you even open your mouth, based upon your name, your religion, your gender, or your race.”

Although these experiences were frustrating, Ali persevered. He recognized the privilege he had to be in these spaces and embraced that privilege as a way to break these barriers.

“You’re simply trying to tell your story. But then you also realize you are running up against a wealth of orientalism and colonialism and racism and bigotry. And so you sit there and go: with great power comes great responsibility,” he said.

It has always been important for Ali to ground himself in his identity. And throughout the years, Ali continued to anchor himself in his Muslim and Pakistani background. By doing so, he fueled representation in his communities and helped bridge the cultures of America in larger and larger ways.

“I knew this when I was [in high school]: I was often the token Muslim kid and the token brown kid. And for whatever reason, from a young age, I always owned it,” Ali said.