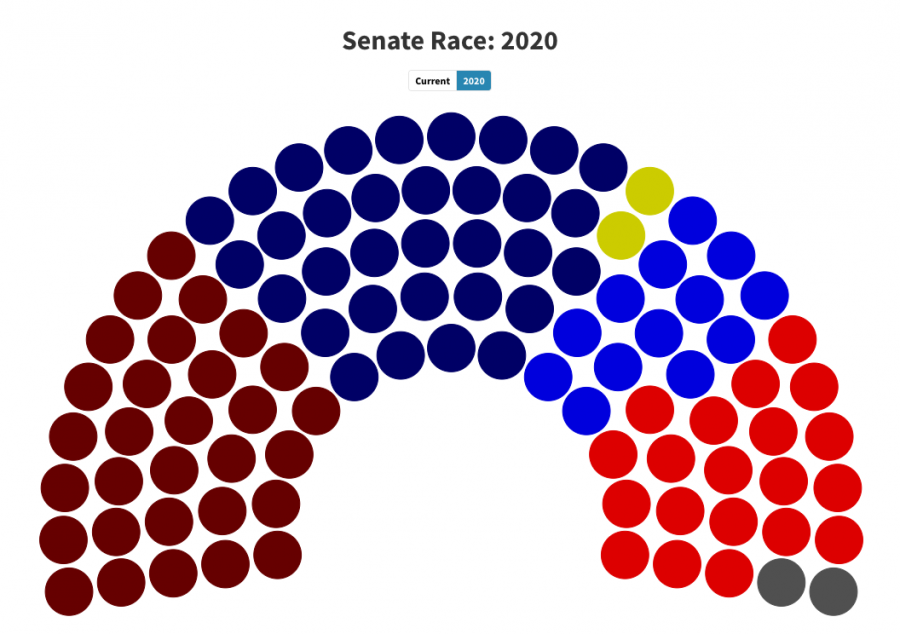 Republicans are currently leading in the Senate 50-48 with two Georgia seats remaining undecided.

by Lucy Ge and Isha Moorjani

Democrats will keep their majority in the House of Representatives for the next two years, and control of the Senate depends on the outcome of the Georgia runoff elections on Jan. 5, according to the Associated Press (AP). Americans elected representatives for all 435 House seats and 35 Senate seats this year.

As of today, the AP has called 33 out of the 35 Senate seats up for election this year, with the Republicans currently leading 50-48. Democrats will need to win the two remaining Senate seats in Georgia to take over the Senate, as Vice President-elect Kamala Harris will hold the tie-breaking vote. Democrats have not controlled the Senate since 2015.

“It’s possible [that the Democrats will win both seats in Georgia], although I would not bet my kids’ tuition on it,” said Dr. John J. Pitney Jr., the Roy P. Crocker Professor of American Politics at Claremont McKenna College. “Georgia has voted Republican most of the time in recent decades. The cliche is, it all depends on turnout. We’re not exactly certain who’s going to show up to vote in the runoff.”

As none of the Georgia candidates reached the 50% of votes required by Georgia law to win the November election, voters will have the chance to vote on the top two candidates from each of the races in the January runoff elections. Incumbent Sen. David Perdue (R-G.A.) received 49.7% of votes and Democratic candidate Jon Ossoff received 48% of votes in the regular Senate election with 99% of votes reported. Meanwhile, Democratic candidate Raphael Warnock earned 32.9%, incumbent Sen. Kelly Loeffler (R-G.A.) earned 25.9% and Republican candidate Doug Collins earned 19.9% of votes in the special Senate election with 98% of votes reported.

Both Democrats and Republicans are already working to raise money for the runoff elections, with grassroots campaign efforts underway for the two critical Georgia seats. Fair Fight, a nonprofit founded by Stacey Abrams, former gubernatorial candidate for Georgia, announced in a tweet last Thursday that 125,000 supporters had already donated to the Warnock and Ossoff campaigns, with over six million dollars raised as of Nov. 9. Both Fair Fight and New Georgia Project, another nonprofit founded by Abrams, have also helped with encouraging people to vote for the first time this year, with 800,000 new voters added to the Georgia electorate since 2018.

On the other hand, Republicans are also pushing for donations for the Loeffler and Perdue campaigns, with Sen. Lindsey Graham (R-S.C.) announcing in a tweet last Thursday that he had already raised over one million dollars for the campaigns.

“[A Democratic majority in the Senate] would be momentous. We saw under Obama’s presidency, when the Senate and the House, of course, fell to Republican leadership, there was a stall of progress,” Ethan Choi (12), lead intern for the Santa Clara Democratic Party, said. “If Democrats retake the Senate, you’ll see them working in tandem with the House and in tandem with the Biden administration.”

If Republicans successfully maintain their majority in the Senate, Sen. Mitch McConnell (R-K.Y.) would continue serving as the Senate Majority Leader. Last Tuesday on Twitter, he expressed his gratitude toward his party for electing him as their party leader again.

“We have a lot more to do to continue fighting for working families and strengthening our great country,” he tweeted. In another tweet, he called for “more smart, focused relief that is targeted to schools, healthcare, small businesses, [and] those who are hurting the most.”

This news confirms what Republicans have said for months:

Our country needs more smart, focused relief that is targeted to schools, healthcare, small businesses, & those who are hurting the most.

Not the absurd multi-trillion-dollar socialist wish-lists Democrats have demanded.

With a Republican Senate, Biden would face difficulty pushing for a more progressive agenda and will not be able to enact his planned policies to address issues like climate change, healthcare, racial equality and gun violence as easily.

“[A Republican-majority Senate] would mean that Biden has to take a more moderate approach to all policy proposals (and nominations, including judicial nominations) that he pushes forward,” said Dr. Amber E. Boydstun, professor of political science at University of California, Davis, in an email interview. “It would also mean that he needs to put more emphasis on executive orders, which do not require Senate approval but which also do not have as much power.”

AP has called 422 of the 435 House seats up for election as of today, and the Democratic House majority stands at 219-203. Although Democrats were expected to gain seats in the House, Republicans flipped several seats this election, including two so far in California.

Incumbent representative Anna Eshoo (D) won re-election in California’s 18th district and defeated Rishi Kumar (D) 63.2% to 36.8% with 90% of votes reported. For her next term, she plans on prioritizing an equitable, free distribution of the COVID-19 vaccine and bringing back the manufacturing of America’s drug supply back to the U.S.

“Whether someone has voted for me or not, I represent everyone, and I’ve always operated that way,” Eshoo said in an interview with Harker Aquila on Oct. 29. “It’s very clear in my record, and how I have conducted myself, that you have to always work to unite people, whether they have supported you or not.”

In an email interview, Kumar, who ran a grassroots campaign that recruited over a thousand high school and college interns, addressed the set of challenges facing the Bay Area and America in the upcoming years: the pandemic, unemployment and the housing crisis, climate change and revitalizing the U.S. economy.

“I ask every student to take up one cause and never stop fighting for it,” Kumar said. “Our leaders are increasingly out of touch with the needs of the people. They are playing partisan politics, playing ball with the lobbyists. If this young generation decides to vote, they can move mountains.”

California’s 21st and 25th districts, two of the 13 House races yet to be called by the AP, are both close. Incumbent representative David Valadao (R-C.A.) is leading by 1.2 percentage points against Democratic Candidate Terrance John Cox in the 21st district with 84% of votes reported, while incumbent Mike Garcia (R-C.A.), who has been in office since Democratic representative Katie Hill’s resignation in May, is currently tied 50% to 50% against Democratic candidate Christy Smith with 86% of votes reported in the 25th district. Keep up with the AP’s election results reporting here.