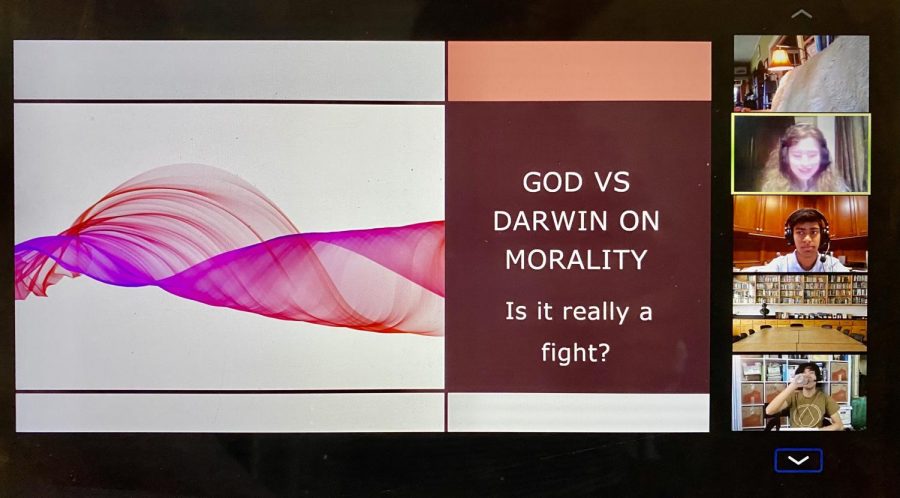 Professor Michael Ruse, a professor of philosophy from Florida State University, discusses the concepts of evolution in connection to those of human morality. Philcon was held virtually on Oct. 16 and 17.

Professor Jeff Behrends, a lecturer of philosophy and the Director of Ethics and Technology Initiatives at Harvard University, began the first talk by examining the interlocking of ethics and regulation in computer technology.

“We ought to care about [ethics in digital technology] because if we get it wrong, we’re bound to get it wrong on a really drastic scale: it’s too powerful,” Behrends said.

In addition, treasurer Akshay Manglik (12) discussed the philosophy behind “Among Us,” an online game, president Sophia Gottfried (12) discussed the theories of Nihilism, Existentialism, and Absurdism, and vice-President Jack Hsieh (10) and secretary Rupert Chen (10) examined the Library of Babel.

In their talk, Jack and Rupert theorized a library containing books that have every possible combination of words. They discussed the ethics of infinity, reasoning that there must be a book in this library explaining how to navigate this infinite library, and a combination of words that unlocks the mysteries of life.

“There are a lot of different ways to view punishment in the game, and they really reflect a lot of long-standing and deep debates about what punishment should look like in our society at large,” Akshay said while discussing the theme of justice in Among Us.

From the Friday talks, students were able to gain a holistic understanding about what it means to study philosophy and apply it to modern contexts as both students and philosophers.

“When you look at things through a philosopher’s lens, [situations] get so much more complicated: there are so many dimensions that you haven’t seen before,” Brian Chen (10), who attended Arnav’s and Akshay’s talk, said.

Hita Thota (10), who attended Professor Ruse’s talk, appreciated the depth of his insight which extended far beyond her eighth-grade study of evolution and found his approach of confronting evolution in relation to the religious human experience and our value systems especially thought-provoking.

“What really interested me was the connection that Professor Ruse made between Darwinism and different leaders in history. For example, he touched upon Hitler, and how [Hitler believed] Darwinism encouraged leaders to get rid of enemies to create a stronger generation.” she said. “Hitler took that idea of Darwinism but twisted it in a way that wasn’t exactly what [Darwin] meant.”

The officers reached out to professors in their personal areas of interest in order to give students exposure to a wide variety of philosophical topics.

“I hope [students] take away that philosophy isn’t one static thing, but it’s really just a way of viewing the world that you can apply to any subject,” Akshay said. “When you think about it like that I think a lot more people would get interested in philosophy than if they just think of it as a stuffy discipline that uses big words and has nothing to do with reality.”

Arnav organized the initial Philcon in 2017, with Philosophy club continuing the tradition in 2018. Although the pandemic forced its cancellation in 2019, the club was determined to continue the tradition this year.

“It’s heartwarming to see that this space [of PhilCon] still exists and has grown and is flourishing under the leadership of the club,” Arnav said.

Although there were challenges that came with the event being online, specifically the trouble of scheduling and getting Harker students to attend without the social environment, officers found that an online event helped them reach more people.

“[Being virtual] has really opened the possibilities. We have three professors attending who don’t live in the same time zone as us. We have attendees coming from across the country that we’ve reached out to you on social media, through extracurricular activities that we know,” Akshay said. “And so I think it really has been able to expand the reach of our conference in a way that wasn’t possible.”

The officers have been working on logistics and marketing since the beginning of August to make sure that they could bring together a successful and insightful conference.

“I just hope that Philcon really encourages [students] to question their deeply-held ideals and question the things around them as sort of an intellectual exercise. I think that makes you a better person,” Sophia said.