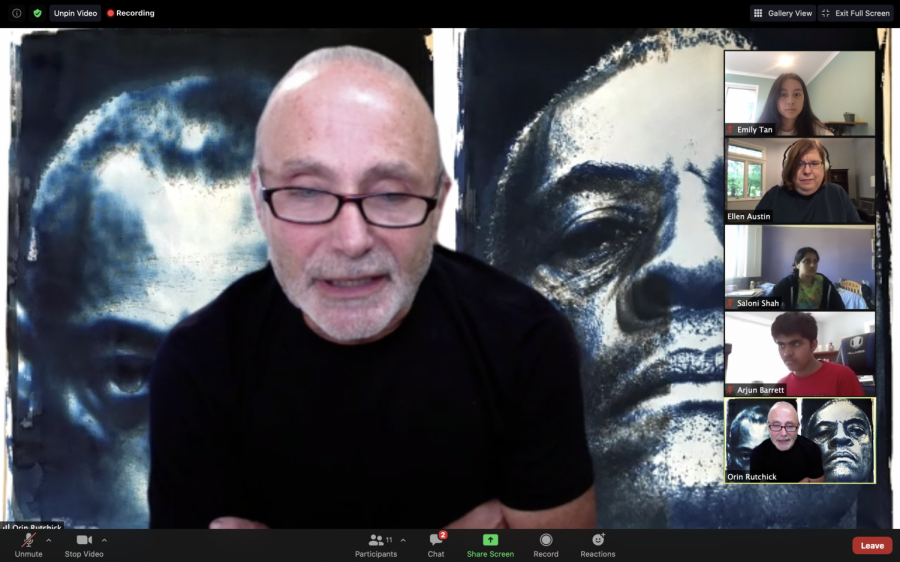 South Berkeley photographer Orin "Orie" Rutchick came to speak on his work with Harker Journalism last Friday, Sept. 25. Rutchick presented photographs from both his earlier projects focusing on the landscape around him and from his most recent portraiture projects that feature the people of his neighborhood.

by Emily Tan and Sarah Mohammed

From inside a small black photo booth decorated on the outside with old-style, glossy photographs and a sign saying, “Free Pictures from 12 pm – 3 pm,” a woman traces a detailed and artistic black-and-white collage of print pictures of herself, her husband and her daughter. She leaves the booth smiling, as another woman sits on the chair in front of the light, posing excitedly for her picture.

As depicted in a video shot in South Berkeley, this is Orin “Orie” Rutchick’s latest project: engaging with his neighborhood in South Berkeley and documenting the beauty of the people around him, which he explained in his one-and-a-half hour visit with Harker Journalism last Friday morning, Sept. 25.

“It was interesting that Orie, whenever he takes photos, puts them in projects. He doesn’t photograph it unless he knows that there’s a purpose to tell a story,” said Nicholas Wei (10), a journalism student who attended Rutchick’s presentation.

One of his cameras of choice is a 4×5 manual film camera, making Rutchick’s portraiture process labor and time intensive. However, Rutchick views this project as a gift because it gives him the opportunity to humanize the homeless population, engage with his neighbors and give back to his neighborhood all at the same time. For Rutchick, portraiture is a reciprocal interaction between photographer and subject, with both parties enriched by the experience.

“Some of these people haven’t had a picture of them taken since high school, [so] I give them three free prints that they can share with their friends and family,” said Rutchick. “[Taking those pictures] is reciprocal, an intimate shared moment.”

Director of Journalism Ellen Austin invited Rutchick to share his work and experience with her second period class and appreciated the respect and kindness which Rutchick gives to all the people he photographed in his community.

“The thing I hope that students would get out of Orie’s visit was that all people have dignity and honor and deserve to be seen as such and known as such and met as such,” Austin said. “He is meeting people at eye level, not standing looking down at someone. He invites people in.”

Rutchick first entered the world of photography in high school, when he picked up a camera from his then-girlfriend’s father. From there, he began applying his skills first to fashion photography and then to portraiture.

After moving from Minneapolis, Minnesota (where he previously owned a photo center) to South Berkeley, California in 2015, Rutchick shifted his focus from mentoring aspiring photographers to developing his personal work. With this move came the opportunity for him to explore his neighborhood, prompting him to start one of his first projects in this area: a collection of photos taken within a square mile around his home.

“For me, it needs to be a challenge every time I do something; there needs to be another reason for doing it. Everything is really deliberate,” Rutchick said. “[The work that I do] has intent. A project is not just about taking a lot of random images. You have to think of the parts and what the parts make in terms of the whole.”

As he scrolls through black-and-white photographs of homes, automobiles and buildings in his South Berkeley neighborhood, Rutchick explains that unlike many photographers, he does not carry his camera around with him. Rather, his photography is always intentional and part of planned projects that feature the findings of his time “looking for the extraordinary.”

“Things that are in pairs,” “apartment buildings that look like motels,” “quirky things unique to South Berkeley” and “the space between 2 houses” are among the motifs from his neighborhood that have caught Rutchick’s attention and spurred him to create collages of photographs sharing those themes.

Rutchick’s current portraiture project in South Berkeley has developed as he experimented with different settings to better fit the people whom he photographs. For example, he started out with a black velvet background, but shifted to using a white background. Harker Aquila editor-in-chief Anna Vazhaeparambil (12), a photographer herself, appreciated the opportunity to hear from a professional photographer creating meaningful work in the industry.

“Usually our photography is meant to accompany something else, like a written piece, but his photography tells a story in and of itself. He uses his collection of photos to spread a message and to share something that is unique,” Anna said. “That idea of doing something through photos and doing something unique that’s so visually driven was something I want to look more into. It’s a very different take that produces some amazing content.”

Rutchick continues to play with different styles for each project, allowing him to build upon past projects in a more interesting way. For each collection, however, he  maintains his central principle of deliberacy and discipline when photographing.

“There are photographers, and there are people that take pictures,” Rutchick said. “The difference is the photographer doesn’t take a picture, they make a photograph. [If] I go out and look at something intentionally, then I’m making a photograph.”