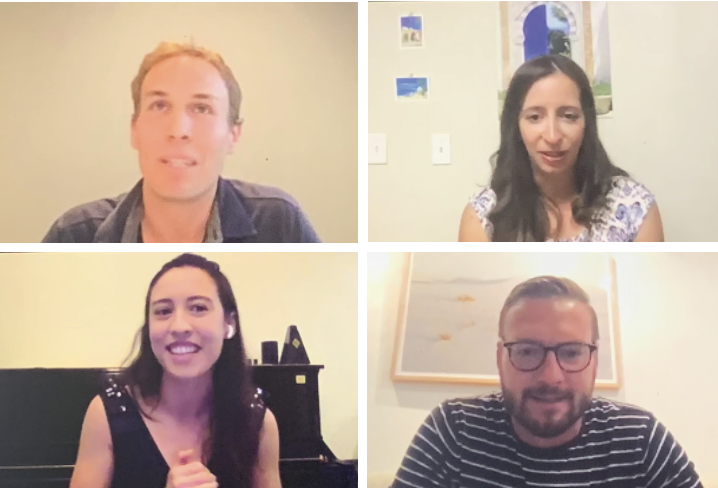 Four alumni were inducted to the Harker Athletics Hall of Fame at 6 p.m. on Friday in a virtual ceremony with approximately 60 people in attendance.

The four inductees were A.J. Reid (‘04), Chris Davis (‘03), Candace Silva-Martin (‘09), and Isabelle Connell (‘13), each of whom will be permanently honored with glass plaques in the Athletic Center.

Reid played football, basketball, and volleyball for Harker, earning the MVP award on all three teams in his senior year. Reid rushed for 900 yards and seven touchdowns as a running back, and he also excelled at wide receiver, racking up 718 yards and seven more touchdowns. At California Polytechnic State University, Reid was the MVP on his club volleyball team, which went on to win the NIRSA National Volleyball Championship. He later co-founded a video advertisement tech company.

Davis was a member of the football, wrestling, soccer, and baseball teams during his time at Harker. He became team captain of the football and baseball teams and even played in the Wedemeyer High School All-Star football game. Davis joined the Claremont McKenna University football team, a historic decision as he was the first Harker football player to play in college. He started on the varsity baseball team for three years and won the “Hammer Award” for his achievements. While playing Division 3 football in college, Davis rose to fifth all-time in single-season interceptions at Claremont McKenna.

Silva-Martin helped the 2007 upper school volleyball team reach the CCS finals and CIF state championships. At the ceremony, Smitty recounted an event during the CCS semi-finals where Silva-Martin suffered a bloody nose and continued to play with nose plugs, winning crucial points that allowed the team to move on to the finals. She also played soccer and softball. A Super Eagle awardee, she was named to the All-WBAL volleyball teams four times. At George Washington University, Silva-Martin was the Atlantic 10 all-time digs leader. She currently works as a data manager at Premise, located in San Francisco.

Connell starred in track and field after dabbling in cross country as a freshman. She became a proficient sprinter and broke five school records, four of which still stand today. One of the first two Harker track athletes to compete in a CIF meet, Connell’s skills and work ethic earned her the Iron Eagle as well as the Director’s award. Connell continued to succeed at Pepperdine University, where she broke 9 school records, none of which have been broken to this day. She was awarded Scholar-Athlete of the Year at Pepperdine and is currently studying for her master’s degree at Santa Clara University.

Head of School Brian Yager spoke next, touching upon the importance of recognizing this year’s inductees as well as those from years past for their contributions to not only Harker athletics but also the Harker community as a whole.

“[The Athletics Hall of Fame] gives us an opportunity to recognize and memorialize members of the Harker community who have been exemplary contributors to the athletic program,” Yager said. “And perhaps more importantly, it allows us to hold [the] inductees up as examples for our future students to follow. And what an important thing [it is] to have exemplars to whom we can point to for having dedicated themselves to something beyond themselves.”

Before handing the virtual mic to middle school athletics director Theresa “Smitty” Smith, Yager thanked the Office of Communications and the facilities team for creating and maintaining the Hall of Fame wall in the Athletics Center, as well as Harker coaches, both past and present, for their role in building and sustaining the Harker athletics program.

Smitty and Molin then described the achievements of each of the inductees one by one, before concluding the ceremony by presenting a video in which they unveiled the inductees’ glass plaques in the Athletic Center. Their accomplishments will be listed in the display panel on the Hall of Fame wall for all students to see. Before the meeting ended, the athletes were met with a round of applause and raucous cheers to celebrate their hard work and service to the Harker community.