A champion for the underdog

RBG leaves behind a powerful legacy for America 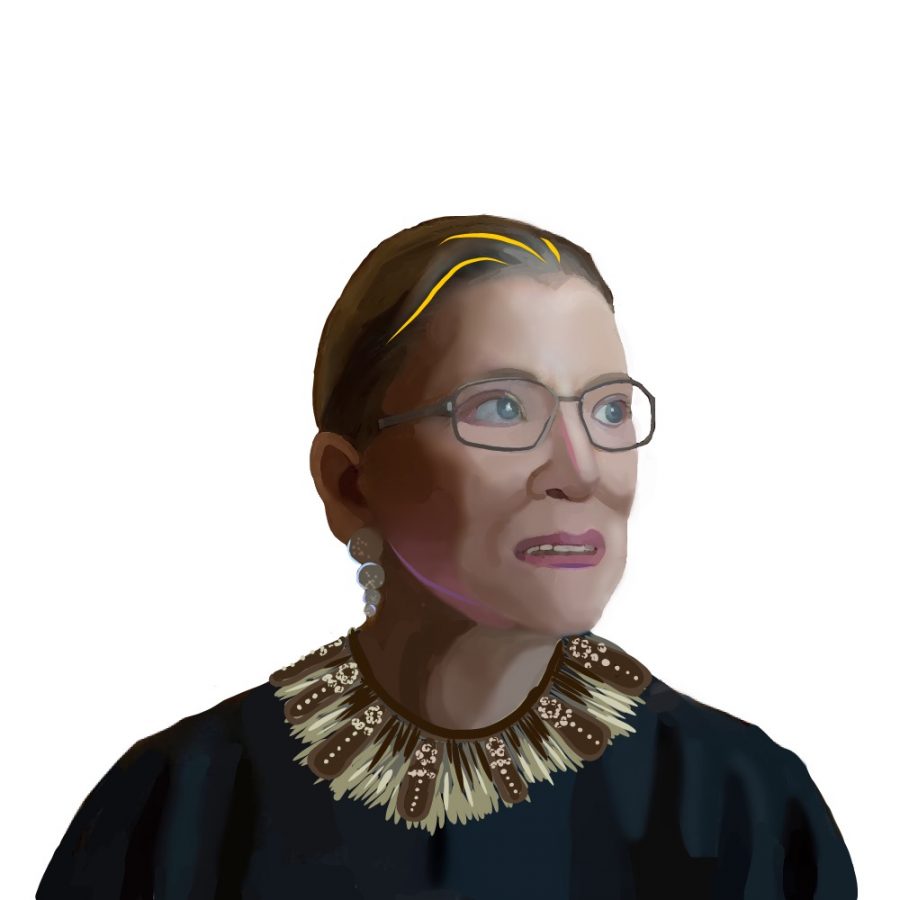 Though Justice Ginsburg’s entire legal legacy rested on both successes and setbacks, her very presence reached the hearts of those far beyond the Supreme Court doors. Even after her passing, her legacy as a woman and societal issues champion will continue for generations to come.

by Varsha Rammohan and Alysa Suleiman

Amidst a sea of black robes traditionally tailored to reveal a man’s shirt and tie, a colorful feminine collar twinkled in the courtroom, the clasp sitting beneath a pragmatic, pulled-back bun. They belonged to one of the only four women to ever serve on the Supreme Court, and her name was Justice Ruth Bader Ginsburg.

Ginsburg died on Sept. 18 at the age of 87 due to complications of metastatic pancreatic cancer, according to a statement released by the Supreme Court.

Appointed to the court by President Bill Clinton in an overwhelming 96-3 Senate confirmation vote in August 1993, Ginsburg was the second woman to don the title and robes of a member of the Supreme Court following Justice Sandra Day O’Connor.

When O’Connor retired in January 2006, Ginsburg became the only woman remaining on the Court for three years, a period she called “the worst times.” She was eventually joined by Justices Sonia Sotomayor in 2009 and Elena Kagan in 2010, both appointed by President Barack Obama.

Ginsburg became the de facto leader of the high court’s four-member liberal bloc, which often led to disagreements with the five other conservative justices in the highly polarized court. She gained widespread attention for her incisive dissenting opinions, earning her the title of the Notorious R.B.G.

This was the first development in Ginsburg’s path to becoming a pop culture phenomenon in her later years; her acronym and image of a frilly lace collar paired with a golden crown turned her into an internet sensation. A documentary of her life hit the theatres in May 2018 along with “On the Basis of Sex” later that year, which chronicled her fight against gender discrimination in her early career.

“I feel like she’s been such a cultural icon just because of how admirable and how persevering she is as a woman who had cancer four times,” Kris Estrada (10), a member of the Youth Activism Club, said.

Ginsburg was treated for colon cancer in 1999, pancreatic cancer in 2009, malignant growths in her lung in 2018 and a malignant tumor in her pancreas in 2019. Despite ongoing medical conditions, Ginsburg refused to retire.

For more than 27 years, Ginsburg channeled her efforts on the court towards amplifying the voices of women and other marginalized groups amidst an amalgam of resistant politics. Bellicose, but with reason, the left-leaning associate justice played a key role in a number of critical cases that significantly altered America’s social landscape.

In United States v. Virginia, the country filed a lawsuit against the Virginia Military Institute, the only remaining all-male public undergraduate college, for violating the Equal Protection Clause of the 14th Amendment. The court struck down the all-male admissions policy in a 7-1 holding with Ginsburg emphasizing that gender equality is a constitutional right in the majority opinion.

“The way that she has served as a role model and an inspiration for women and for girls to pursue careers in law and careers in politics is huge,” upper school history and government teacher Carol Green said. “She very much was at the front and breaking ground, getting jobs, fighting for jobs and being the only woman in a lot of the workplaces that she was in, such as being one of the few women to get through her law school.”

Ginsburg also championed same-sex marriage rights, specifically in the Obergefell v. Hodges court case in June 2015. Led by Justice Anthony Kennedy, the Supreme Court ruled 5–4 that state bans on same-sex marriage were unconstitutional under the clauses of the Fourteenth Amendment, ushering in a new era of freedom and equality for same-sex couples.

“She wasn’t only a voice for women, she was also a voice for the LGBTQ community as well,” said Eira Saraff (9), another Youth Activism Club member. “She was also the only representative for minorities in the Supreme Court right now, so it’s really concerning now that she’s gone for both minorities and women.”

Amidst the vast outpouring of support for Ginsburg comes the important conversation of her inherent privilege. As a white woman who occasionally failed to rule in favor of supporting minorities, she represents the continuing strife within intersectional feminism of solely serving older, elite white women.

“She made decisions that hurt Native American rights in some decisions,” Green said, as seen in the Sherrill v. Oneida case. “Although she’s really paved the way there, in some ways that public self and that notorious RBG almost gets away to become this absolutely amazing superhero, and even our superheroes have flaws.

Though Justice Ginsburg’s entire legal legacy rested on both successes and setbacks, her very presence reached the hearts of those far beyond the Supreme Court doors. Even after her passing, her legacy as a woman and societal issues champion will continue for generations to come. This was the Notorious RBG.