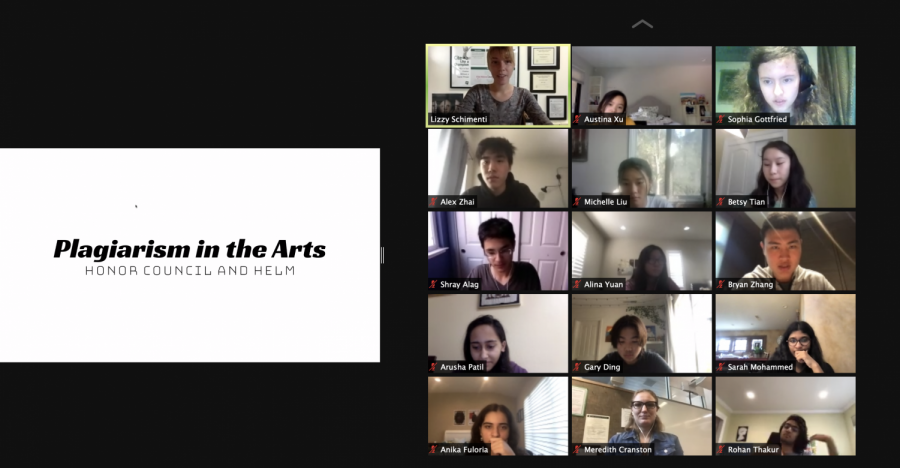 26 people attended a joint workshop held by HELM and the Honor Council on Friday. It opened with a casual conversation detailing what is going to be covered.

26 students and faculty attended a plagiarism workshop organized by honor council and Harker Eclectic Literary Magazine (HELM) on Friday over Zoom, where they learned about different examples of plagiarism in the arts and discussed them in breakout rooms.

The workshop took place on the last day of the four day Honor Week, which featured the new tenets of accountability, respect and honesty as themes for different days. Students participated in environment-themed challenges for class spirit points and watched a video interview with alumna and Stanford University Judiciary panel member Millie Lin (‘18).

HELM brought up American singer Bob Dylan, who was accused of plagiarizing parts of his Nobel Prize speech from Sparknotes, a site that some Harker students use to gain deeper understanding of works of literature through reading summaries and analyses. The presentation featured other examples of plagiarism by artists, musicians and writers, providing attendees with the opportunity to learn about plagiarism outside the classroom.

“We wanted it to be interactive, but we also wanted people to have specific cases because generalities get a little muddled sometimes,” HELM co-editor-in-chief Sophia Gottfried (12) said. “Gray areas get people to discuss.”

The group discussion ended with an analysis of Helene Hegemann’s novel, of which parts were plagiarized from blogger Deef Pirmasens. Hegemann argued that “There’s no such thing as originality, just authenticity,” and she called her book “mixing” rather than plagiarizing.

“This idea of mixing is fascinating to me… and I see this a lot in my position [due to the online resources available],” upper school Dean of Students Kevin Williamson said during a breakout room discussion.

Williamson reflected on how the definition of plagiarism has shifted due to the rise of internet resources, which allows people to more easily take ideas both intentionally and unintentionally from a variety of sources. Other students and faculty agreed with this sentiment.

“It’s becoming increasingly difficult because there is so much access and the ease in which you can acquire influence without even knowing it,” HELM advisor and upper school English teacher Elizabeth “Lizzy” Schimenti said in a breakout room discussion. “[But] there’s a difference between inspiration and appropriation.”

Students had the opportunity to choose from three breakout room discussions to be a part of, and each discussion focused on plagiarism in either art, music or creative writing.

During the discussion on plagiarism in music, a main topic of discussion was how it is difficult to create truly original content in today’s world because of common ideas and unintentional influence.

“In a major scale there are seven notes. Honestly, there’s no combination of those seven notes … that hasn’t been done already,” Anika Fuloria (12) said in an interview after the meeting. “So truly, it’s about how you take those notes and how you interpret them, how you put your own spin on them, which is the really important part of composing because you’ll never have an idea that is truly unique because everything has been done already.”

“It goes into a more intrinsic part of human nature… we like to take credit for things we’ve done which plays into why we make such a big deal of [plagiarism] even if it’s one line or one quote,” Austina said.

Upper school librarians provided honor council and HELM with the examples of plagiarism, and a practice run of the workshop was conducted on Thursday.

“Being able to choose our breakout rooms and talking with friends about almost philosophical topics was a fascinating way to engage everybody,” Michelle Si (12). “Two of my very good friends are on the honor council, so I was telling them about how impressed I was [with] how they were trying to engage everybody, especially with this workshop.”