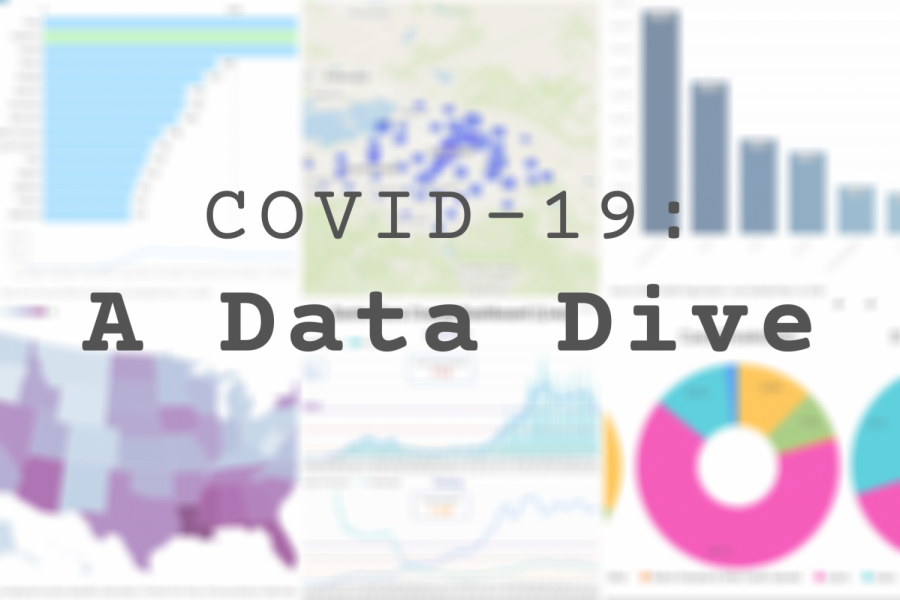 A data-driven dive into the effects COVID-19 has had locally, nationally, and globally.

259 days. That’s how long it’s been since the World Health Organization (WHO) determined that a novel coronavirus caused a pneumonia outbreak in Wuhan, China. And since then, the staggering numbers have continued to pile up. 29 million cases worldwide. Over 900,000 lives lost. In the United States alone, 6.6 million cases and 190,000 deaths.

For many, daily checks on coronavirus numbers turned into an anxiety-inducing bad habit early in quarantine. As hope for a definite end-date dwindled, so did the frantic checking, eventually petering out into a state of voluntary blissful ignorance. So, for everyone who hasn’t been keeping up, here’s Harker Aquila’s recap of how we’ve been doing — as a county, as a state and as a nation — complete with interactive data visualization.
California
California recorded its first case of coronavirus in late January, one of the first infections within the U.S. Soon, the disease spread to Santa Clara County, with local outbreaks beginning to develop throughout the state. As case counts began to climb in early March, Bay Area counties issued shelter-in-place orders to prevent community transmission, the first of their kind in the nation. Gov. Gavin Newsom soon followed suit, issuing a statewide order on Mar. 19.

Newsom announced a four-stage reopening plan, relying on six key indicators to reopen. Yet, as portions of the state began to reopen businesses and normal activities through May, a concerning surge of coronavirus cases in June caused Newsom to roll back his plans.

The state now operates on a four-tier system, with each county assigned a ranking depending on two factors: the adjusted average daily case count per 100,000 citizens, and the test positivity rate.

The tier rankings are updated weekly, and counties must meet the criteria for the next tier for two consecutive weeks before their status can be updated.

Infographic from covid19.ca.gov.
Santa Clara County
Santa Clara county changed to Tier 2 status on Sept. 8, with an adjusted case count hovering at 6.9 new cases per day per 100,000 residents, right under the 7-case threshold. Testing in Santa Clara, although starting off slow, has grown to average over 6,000 tests a day with a positivity rate of just 3.5%, low enough for Tier 3 classification.

If the county can maintain Tier 2 status for an additional week, schools — including Harker — will theoretically be allowed to reopen for in-person learning under strict guidelines, including daily symptom screening, mandatory face coverings, and stringent physical distancing. Harker plans to likely stay remote through first semester, although limited extracurricular activities may resume as early as Sept. 29.

As with across the country, disparities have emerged in the racial composition of cases and deaths within Santa Clara County. Overall, the County has logged the race of the patient in over 85% of cases; out of these, a clear pattern has emerged, with Hispanic people testing positive at a rate 2.5 times higher than the rest of the population.

California in Context
Although the first cases of Covid-19 occurred in Washington state and California, the first major outbreaks came in the densely populated New York City, with case totals peaking in March and April. New York Governor Andrew Cuomo rose to national prominence for his daily coronavirus briefings, where he rallied New Yorkers and provided important national updates.

As New York quelled its surge of infections, case counts in states in the South and West began to climb towards the end of June, especially in California, Florida and Texas. The surge led to the U.S. setting its highest single-day new case record on July 15.

As a country, the United States has lagged far behind the world in it’s COVID-19 response, failing to test early and recording the highest number of both cases and deaths in the world. Over 900,000 people have died from illnesses related to COVID-19 worldwide, with over 20% of those deaths occurring in the United States.

Contributing to the ineffective U.S. response to the pandemic has been the lack of a unified national approach. State governors have largely set their own policy with limited guidance from the CDC, leading to inconsistencies in shelter-in-place orders, mask-wearing ordinances and testing. For the most part, densely populated cities and states have been hardest hit by the pandemic.

All graphs are static and updated till the date of publication, excluding the two live Santa Clara County graphs.