Humans of Harker: Learning to fall 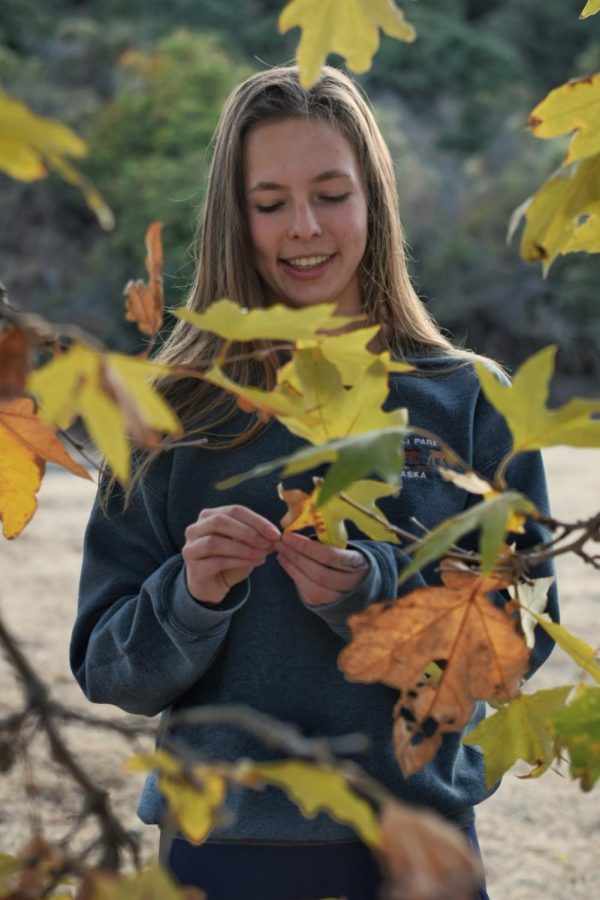 “[Volleyball has] taught me how to fall correctly, and another thing it taught is that you don’t have to be the best at something to be good at it. If you just hit the ball in a smart way, then it still scores points and you’re good at it. You could be a background player and still make a much bigger impact on the team than you would think,” Anya Gert (’20) said.

The sun begins its descent behind the mountains at Rancho San Antonio as Anya Gert (‘20) fiddles with a leaf. A lanyard with her car keys swings from her pocket, jostled as she takes in the different angles of the autumn foliage.

Those who know Anya know that she loves the outdoors. From hiking to mushroom-picking to skiing, Anya spends much of her free time in nature — yet, this wasn’t always the case.

“When I was a child and I started skiing, my parents had a leash because I was scared and they didn’t want me to accelerate and fall on my face,” she said, laughing. “I was terrified, but now I like skiing and there are moments when I remember I had my parents holding me on a leash to make me not scared.”

The same fear of falling — both literally and metaphorically — found its way into other aspects of Anya’s life, like volleyball. Having played the sport since a young age, she credits the sport with teaching her how to persevere through ups and downs.

“[Volleyball has] taught me how to fall correctly, and another thing it taught is that you don’t have to be the best at something to be good at it,” she said. “If you just hit the ball in a smart way, then it still scores points and you’re good at it. You could be a background player and still make a much bigger impact on the team than you would think.”

And the years of volleyball paid off — as a senior starter on last year’s girls volleyball team, Anya helped lead the team to its first Central Coast Section (CCS) championship.

“[Watching] her team and her come together and win girls’ volleyball’s first-ever CCS championship —  that’s pretty insane, right? I know how much work she put in and just the energy in the crowd, everyone supporting the team [made it] really memorable,” close friend Henry Wiese (‘20) said.

A similar philosophy finds its way into Anya’s art — owning the imperfections to ultimately craft something meaningful.

“I feel like I always hype [the art] up in my head, even though it’s probably not going to turn out the way I want it to. In the end, it just expresses what I want it to express anyway. The meaning evolves as I do it,” Anya said.

In creating the art, she emphasizes how it in turn has a profound impact upon her, helping Anya better understand herself.

“It used to be just about images because it was just cool to draw, but as you grow up, I think you get to understand yourself further because you’re making the art more personal,” Anya said. “I think in general, when I use my sketchbook, I don’t have the technical skill that a lot of people have and I’m well aware of that […], but it’s more of the idea that counts. I just focus on the idea instead of what it actually looks like.”

Anya’s passion for art also translated into her experience as a Mitra Scholar researching the street art of Occupied West Berlin.

“She puts her whole heart into what she does,” close friend Sejal Krishnan (‘20) said. “She did the unorthodox thing of analyzing Berlin [street] art, which is very different from the typical literary analysis of history.”

Anya’s wholehearted passion for the activities she pursues derives from a larger ability to reach beyond the orthodox, surprising her peers with her out-of-the-box insights.

“Anya’s really carefree and plays into her emotions a lot. Having someone like her in my life made me more in tune to my emotions and more sensitive to the people around me,” Anika said.

Anya goes against the current in her own way and, through example, encourages others to do the same. In her work — whether in the realm of volleyball, art, or research — she rolls with the punches, quietly building on her accomplishments.

“[Anya] has taught me to be aware of the quietude of achievement and to be understanding that oftentimes, the people who are the most dedicated or the most willing to be dedicated to something don’t tell you that. You have to observe it,” Halback said.