Humans of Harker: Leadership and love 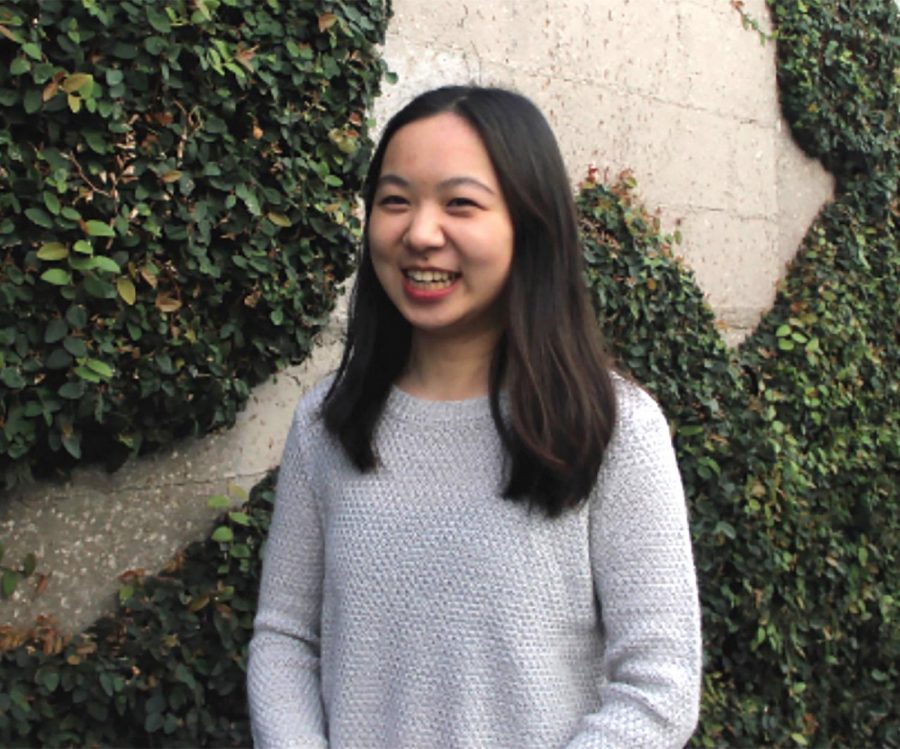 “I'm not nearly there yet, but [my confidence has] definitely been getting better since I was pretty shy and timid coming into Harker my freshman year. I know that there's a lot of people that are really confident in what they do, and I really admire them. Everyone's so driven and that has really pushed me to kind of try to find my own place in high school and be more confident,” Alyssa Huang (’20) said.

Even at a small school like Harker, it’s tough to remember everyone’s names, especially if they’re in a different grade. But there’s one person everyone knows—Alyssa Huang (’20). Whether she’s announcing the sale of Valentine’s Grams or hanging up appreciation posters for the school’s staff, Alyssa’s bright eyes and easy smile can nearly always be associated with good news.

This past year, Alyssa held the position of ASB Secretary, but she has been on class council since sophomore year.

“I wasn’t initially going to run, but then I thought that this would be a good way to try to change some things. I remember Roma [Gandhi (’20)] and I were turning in our permission slips on the same day, and we were both on the edge of running. We ran into each other and were like, ‘If you’re going to run, then I’ll run.’ So, we both ran. And I think for both of us, we just saw something that needed to be changed and we wanted to improve our community,” Alyssa said.

Even though ASB takes up a majority of Alyssa’s time at school, she loves working with other people on council because the community makes it fun for her. Through ASB, Alyssa has initiated two significant projects: kitchen staff appreciation and Valentine’s grams.

“The first project we did was kitchen staff appreciation. We went around and interviewed the kitchen staff and got fun facts about them, like their favorite sports teams and favorite subjects in school,” Alyssa said. “The goal was to get students to approach kitchen staff more and be able to talk to them. The feedback was pretty good, and people told me that they really enjoyed it and they were really happy to be able to match a name to the face.”

As a fellow student council member, Avi Gulati (’20) has worked alongside Alyssa in both class council and ASB. Through this, he has not only witnessed Alyssa’s work ethic, but he has also become a close friend of hers.

“I remember that it was the week of Valentine’s grams, and because of the schedule, we had to delay it by two weeks, so it happened a week after break. Because of that delay, we didn’t package them at the right time, so Alyssa took it upon herself to package at least 100 of them, and I think that’s a testament to Alyssa’s attitude and her propensity to greet everything with such joy,” Avi said. “She doesn’t think of her work as a burden, but she connects work and play.”

Alyssa has also been swimming since she was six, and it has taught her to set a routine and improve her time management. In her freshman and sophomore year, she qualified for a CCS relay, alongside her other teammates.

“It was a pretty cool experience for me. Vivian Wang (‘18) was insanely fast, but she was a really humble person too, and I’m really grateful that I was able to swim with her and learn a good work ethic,” Alyssa said. “She gave me tips on my dives, and it was just nice to be on a team and race together.”

Throughout her four years of high school, Alyssa has strived to work on her confidence, though it is still a continuing journey.

“I’m not nearly there yet, but it’s definitely been getting better since I was pretty shy and timid coming into Harker my freshman year,” Alyssa said. “I know that there’s a lot of people that are really confident in what they do, and I really admire them. Everyone’s so driven and that has really pushed me to kind of try to find my own place in high school and be more confident.”

While the performance aspect may not have intrigued Alyssa, piano has been a constant in her life and an activity she could fall back upon when needed.

“I used to compete a lot when I was little, but I realized that I didn’t really like the pressure of performing for others and having to do well at one specific performance at a specific time. But now, I just do it because I want to,” she said. “My dad’s the one who taught me the value of classical music, and it has been a great way for me to calm down and collect my thoughts.”

Another aspect that many may not know about Alyssa is her fluency in French and her unique elementary school experience.

“I read in French as well as English because I went to a French elementary school, so I grew up French immersion. I was told this story by my parents, but in the year before pre-K, I went to Stratford, and apparently I cried every single day,” Alyssa said, laughing. “And in the summer, I did a little immersion program in French, and my parents thought I would hate it. But, learning the language came naturally and I wasn’t behind the other kids. I went for a couple of weeks and I really enjoyed it and didn’t cry. So they enrolled me.”

Having been engrossed fully in both French and English as a child made switching schools a dramatic shift for Alyssa, but she maintained her deep connection to French culture even while engaging in Harker’s rigorous courses.

“When I came to Harker in sixth grade, it was quite a big adjustment. Keeping up in Spanish took a lot. In high school, though, I really started seeing the value of keeping the language. At one point, I even considered going to college in France,” Alyssa said. “I took the French Ministry test, and I got my certificate to go study in France because I wanted to have that option for me. One way I kept up French was by watching YouTube videos, like Top Chef in France. I mean cooking in French food, what’s better?”

France is known for a rich, romantic culture that emphasizes passion and friendships. Many of those close to Alyssa, like Gloria Zhang (’20), have observed similar traits, such as friendliness and excitement, in her personality.

Through both her influential role in the school community as well as her characteristic kindness, Alyssa has formed deep, lasting connections at Harker.

“As high school’s coming to a close, I just reflected on how thankful I am to be part of the Harker community,” Alyssa said. “It’s been quite the ride. I’m just really thankful for everyone that I’ve met Harker.”