Humans of Harker: Make the most out of every moment

Nerine Uyanik ('20) shares her appreciation with the world around her 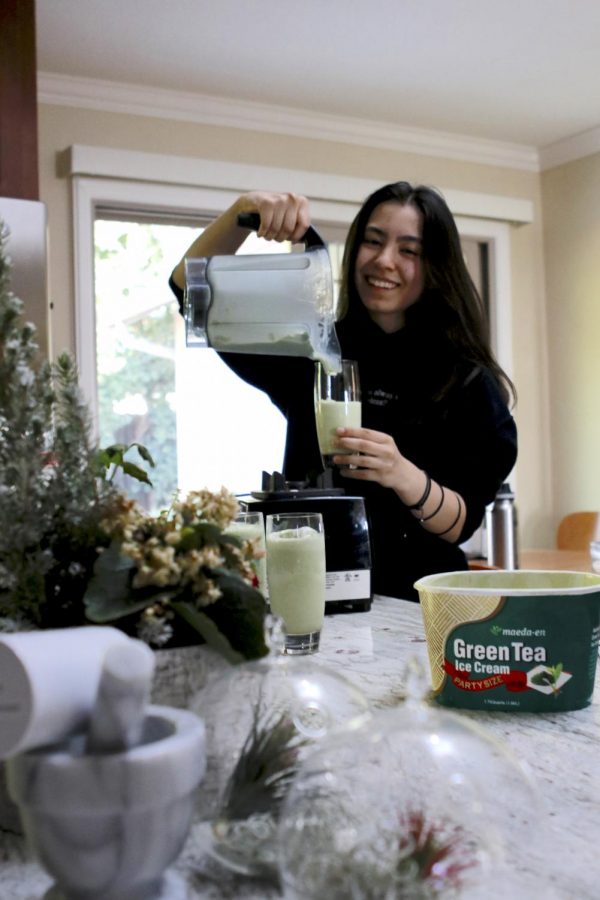 “I like being guided by the idea of making the most out of any situation because it is intentionally ambiguous. It gives me the flexibility to define it as I see fit. And then pursue it as I see fit,” Nerine Uyanik (’20) said.

“Keep putting out good. It will return to you tenfold in unexpected ways.”

That’s the piece of wisdom found at the bottom of every email sent by Nerine Uyanik (’20). A variation on a quote by Farrah Gray, the adage found its way into the bottom of Nerine’s email signature in early 2018, but it has been a belief that she has sought to embody for far longer. It’s the philosophy that inspires her to organize end-of-school-year hiking trips, to invite her friends on impromptu outings, to walk home from school with friends and make them matcha milkshakes, to share the breakfast she brings to fifth period with her hungry tablemate.

“If someone is there for me once, I want to be there for them at least 10 times; or if someone offers me a cookie, I want to gift them a batch in return,” she said. “I feel like I am very wholehearted in everything I do, but that wholeheartedness comes across as extra sometimes.”

Ashna Reddy (’20), the classmate in the above story and a close friend of Nerine’s, describes her as “bringing 100 percent to everything she does.” She recalled an instance of this enthusiasm, an AP Psychology project where students were asked to create representations of parts of the nervous system.

“[The project] wasn’t a big deal. And Nerine carves out this entire sculpture made of baguettes that she has with Nutella for a spinal cord. It was the most extra thing I’ve ever seen in my life for a project that meant absolutely nothing,” Ashna said, laughing.

Why does Nerine put so much passion and effort into all the things she does? It’s because she seeks to make the most out of every situation. She likes to think of everyone as “stuck” in certain situations, in the same boat and believes that what makes people individuals is how they respond.

“I like being guided by the idea of making the most out of any situation because it is intentionally ambiguous,” she said. “It gives me the flexibility to define it as I see fit and then pursue it as I see fit.”

Nerine takes full advantage of this flexibility, trying to find worth even in the most tiresome and tedious of tasks. It’s something her friends admire about her. Ashna recalled Nerine’s admission of having enjoyed preparing and taking the SAT exams.

“It’s not the test itself, but the passages are a chance to discover new knowledge, according to her. One of her values is learning and education, and she values it to the point that it’s always ingrained in her mind,“ Ashna said. “[Nerine] has a really strong sense of self, she knows exactly who she is and what her values are, and she will not compromise for anyone or anything.”

And it’s true — Nerine will find the ways to make use of even the most dull and boring occasions. This is perhaps best exemplified during her thrice-weekly, approximately two hour round trip drives into San Francisco for fencing training. With no intention of being productive during the drive, she takes the opportunity to relax, to spend time with her father and to devote her full attention to music.

“While stuck in the car, my dad and I have come to discover artists together and to appreciate albums across genres and languages,” Nerine said. “By putting myself in that car, I am carving out time in my life to enjoy life. I think I wouldn’t make that time for myself otherwise, so I’ve come to really value this routine.”

One of Nerine’s most striking qualities is her ability to have a recommendation, be it music or other, tailored to just about any one of her friends and acquaintances. It’s an ability they are definitely touched by.

“I find it very telling of [Nerine’s] personality that she can keep track of so many things and be so caring about her friends,” Grace Huang (’20), who’s been friends with Nerine since middle school, said. “There’s been a lot of [recommendations] over the years. It’s been songs that I wouldn’t find by myself, but she somehow finds and knows that I would like them. And I think that’s pretty cool.”

Nerine really values having a shared appreciation of something in her connections to other people and takes action to create such things. It’s something Christopher Hurshman, who has taught Nerine English and Russian Literature her sophomore and junior years, respectively, has noticed. He recalled the events that ensued after she decided to hang out in his room during lunches.

“It’s not enough for her to just be there, she’s going to invite all of her friends and make it their social center … and she starts to act almost like a proselytizer to convince everybody else that this is the thing to love and to be,” Hurshman said. “She’s never satisfied with just enjoying something for herself. She always wants to share the joy of it with other people, and I really appreciate that. I think she’s the sort of person who has, because of that infectious enthusiasm, a really palpable effect on all the people around her.”

This eagerness to share her joy with the people around her is part of what drives Nerine to create and organize events, to bring her plans into existence. It’s something that Nerine has always striven towards.

“I’ve always had a lot of ideas, which I’ve now learned is both a strength and a weakness because more important than having ideas is to be able to execute them,” she said. “I used to say I’m proud of generating ideas, but recently I’ve kind of adopted this mindset of valuing what I do to implement them.”

It’s an endeavor that, according to her friends, has been largely successful.

“Instead of being the kind of person who makes a plan and then never does it, [Nerine] actually encourages. She actually makes plans and goes through with them,” Grace said. “I remember this one time we went to [San Francisco] together for brunch. And then we went to look at some graffiti, and it looked really cool. It was something that I wouldn’t have thought about even visiting or looking at if I hadn’t gone with her.”

Ultimately, Nerine would rather share her enthusiastic interests with others than keep them to herself. Sharing the joy, she believes, in turn, creates more.

“That’s a very generous way to move through the world when your first instinct, whenever you enjoy something, is to think, ‘How can I share this thing with somebody else?’ That’s a really admirable attitude and I think it’s one of the reasons why Nerine is really lovely to be around, because she doesn’t want to reserve any pleasure or joy for herself; she wants to share it with others,” Hurshman said.