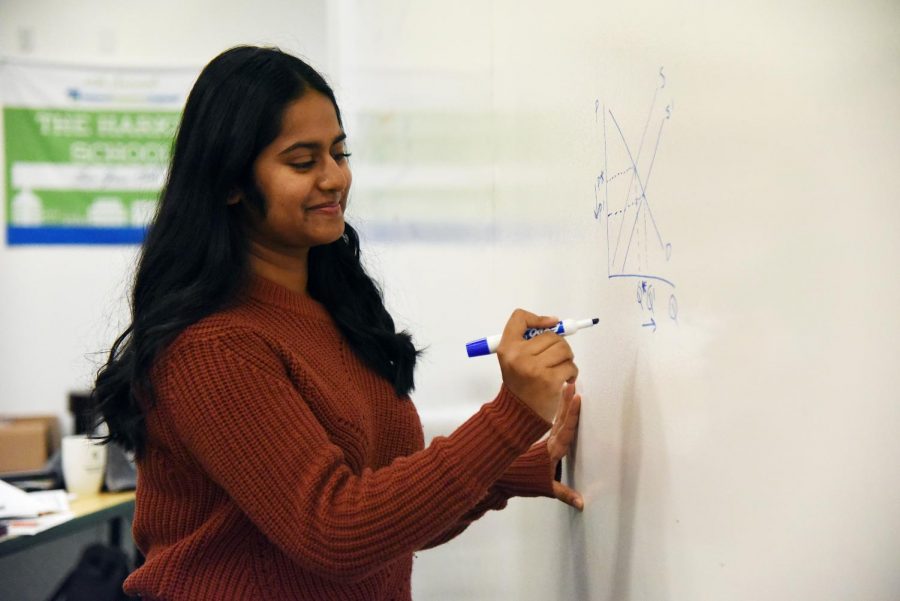 “Prioritize yourself. I now prioritize my health over any grade. Overworking is one of the biggest things you should not do because the results are not always what you want, which leads to you feeling like you did it for nothing. I feel like taking that breather, and finding why you’re really doing something is really important,” Srivani Vegesna (’20) said.

Sitting cross-legged in Dobbins Hall, Srivani Vegesna (’20) balances herself evenly on one of the concrete benches, gently setting her phone down beside her. The sun reflects off of her sleek black hair, and she holds her short frame tall. She sits calmly with a light smile on her face, her cool presence unbroken even in the chaotic ambiance of the building, filled with laughter and chatter.

“Srivani stays pretty calm most of the time. Whenever something crazy is happening, she’s like a rock that we all can rely on because we know that she’ll never change,” close friend Gina Partridge (’20) said. “She’s also very honest and wholesome. It’s just fun being around her.”

Just as most high schoolers, Srivani pursued academic excellence aggressively as she transitioned into high school. Pushing herself to study long hours, she shirked relaxation and other stress relievers such as spending time with friends or enjoying a hobby.

At the end of sophomore year, Srivani encountered a serious health issue. Hospitalized for a little under three weeks, she was required to undergo a period of complete rest. During this period, she couldn’t spend much time on school or other activities and spent a lot of time reflecting and relaxing.

“During 10th and 11th grade, a lot of people do testing, but I couldn’t do any of that kind of stuff because I just had to completely rest. I had a really great rest, but it definitely affected my school and academic life because literally all I could do was rest,” Srivani said.

As she recovered, her parents and twin brother, Ramanand Vegesna (’20), supported her through the process, admiring her resilience in coping with the situation.

“We were in the ambulance and I was sitting there with her and she was telling the medical people, ‘Can you tell Mom that I’m ok?’ She’s just that strong and she’s maintained [her lifestyle] with everything, including the unbearable pain. She’s maintained the same way [she lived her life before] and she’s very strong. That’s the thing that surprises me; I didn’t see her maturity before,” Bala Vegesna, Srivani’s mother, said.

As she slowly began re-entering her life as it was before, her mindset shifted. Srivani learned the value of taking a step back and checking in on both her physical and mental health.

“Prioritize yourself. I now prioritize my health over any grade. Overworking is one of the biggest things you should not do because the results are not always what you want, which leads to you feeling like you did it for nothing,” Srivani said. “I feel like taking that breather, and finding why you’re really doing something is really important.”

While finding that purpose, Srivani simultaneously discovered her interest in the world of economics. After taking a summer Economics course and the Economics class in 10th grade, she instantly grew fascinated with the subject and its various applications.

“Economics definitely has an impact on the way you view things around you and the way you interact with the world. It opened my eyes to the value of money. It’s also really great that it’s between a social science class and a math class, and it’s really good at integrating both aspects of it equally,” Srivani said.

Srivani’s Game Theory teacher, Samuel Lepler, sees her dedication to the subject and appreciates all the work she puts in to further grasp the material she learns in class.

“It’s no secret that Srivani loves Econ[comics]. I love teaching her, but there’s never a day where she doesn’t come to class with some sort of a question or comment on what we’re learning. I think it’s that curiosity and interest that allows her to dive deeper and do more explorations,” Lepler said.

Apart from learning to tackle her academic coursework in a different manner, Srivani transferred her new outlook to her everyday life, emphasizing time with friends in equal proportions to time spent studying or working.

“Having a real understanding of your mental health is especially important when you have so many things piled up and so many responsibilities, and I feel like that’s a really huge burden to people our age,” Srivani said. “That’s why I feel like having a good headspace is important.”

She brings this to her friendships as well, practicing level-headedness and bringing a unique perspective, a fact close friend Rachel Broweleit (’20) is especially appreciative of.

“The best thing about Srivani is that she’s always super calm and pretty much in the same mood every single day, which makes her very level-headed even in stressful situations like tests or other problems,” Rachel said. “She has always been an amazing listener, which makes her a really valuable friend because she’s always there to listen to my problems and give me advice and support.”

While Srivani also emphasizes her ability to remain calm, she believes she still has work to do to attain the perfect balance between her emotions and the stresses in her daily life.

“I get in my head more than you would think because I’m usually a lot calmer than a lot of my friends. They show it on the outside while I’m freaking out on the inside, so most people think that I’m really calm, and I am for the most part, but I think most people just see the surface,” Srivani said.

This, however, doesn’t diminish from her aspirations and the kindness with which she treats those around her.