Editorial: Say their names — and listen 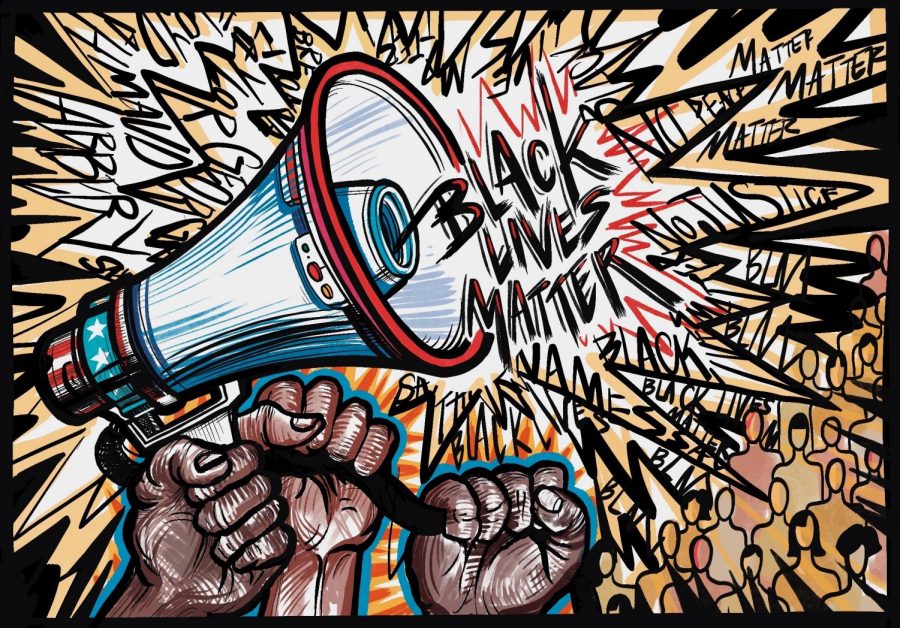 This illustration depicts how the country has reached a flashpoint. The African American community is speaking out against systemic racism and police violence, across the nation and in the Harker community, too.

Tony McDade. Breonna Taylor. Ahmaud Arbery. Eric Garner. Rodney King. Tamir Rice. And so many more African American men and women — most unpublicized, many minors — have been killed by the police in this country.

Yet this country continues to systemically oppress African Americans, especially through law enforcement practices and policies. African Americans represent 13% of the population of the United States but 24% of the people police killed in 2019. Since 2015, police have fatally shot 1,293 African Americans.

With the killing of George Floyd by a Minneapolis police officer on May 25, the country has reached a flashpoint.

We, the Harker Journalism program, stand and will continue to stand in solidarity with the African American community and the voices that have too long gone unheard.

Racism is not an artifact of the past. It persists now, as shown blatantly through these killings — acts of police violence. Yet racism also lives quietly and daily through implicit biases and small actions — and it exists within the Harker community, too.

In interviews with Harker journalism conducted over the past two weeks, students and alumni of color stated that they have each heard the n-word repeatedly in casual conversation with other Harker students. A student joked with an African American student in a non-classroom setting about how much they would be worth at a slave auction, going as far as to look up the amount in today’s currency. An African American alumnus said that classmates would repeatedly ask if they did drugs, sold drugs, knew where to obtain drugs or were affiliated with gangs.

We are Harker journalists, but we are students, too. To hear fellow students and alumni tell us that these racist actions are happening on our campus right now is upsetting to us, because it should upset everyone. Change needs to happen now, both in our community and across the nation.

One path to address systemic racism is to hold open discussions. The schoolwide Solidarity and Fellowship Vigil organized by the Harker Diversity, Equity and Inclusion Committee last Thursday, which saw around 250 students and faculty come together to express their emotions about racial inequity, was an important first step.

The committee is holding two upcoming town halls for the community to discuss Harker’s diversity and mission: one on Tuesday from 6-7:30 p.m. for all staff and grade 6-12 students, and one on Wednesday at the same time for parents and alumni.

Our content needs to address and spotlight racism, both in our community and nationally. As we aim for more equity in our coverage, we invite feedback to hold ourselves accountable and foster the necessary discussions.

Our community has begun the difficult conversations — now, they must continue. Our advocacy, involvement and activism must transcend this moment.