Humans of Harker: The man behind the myth

Nash Melisso ('20) finds himself in sharing his music 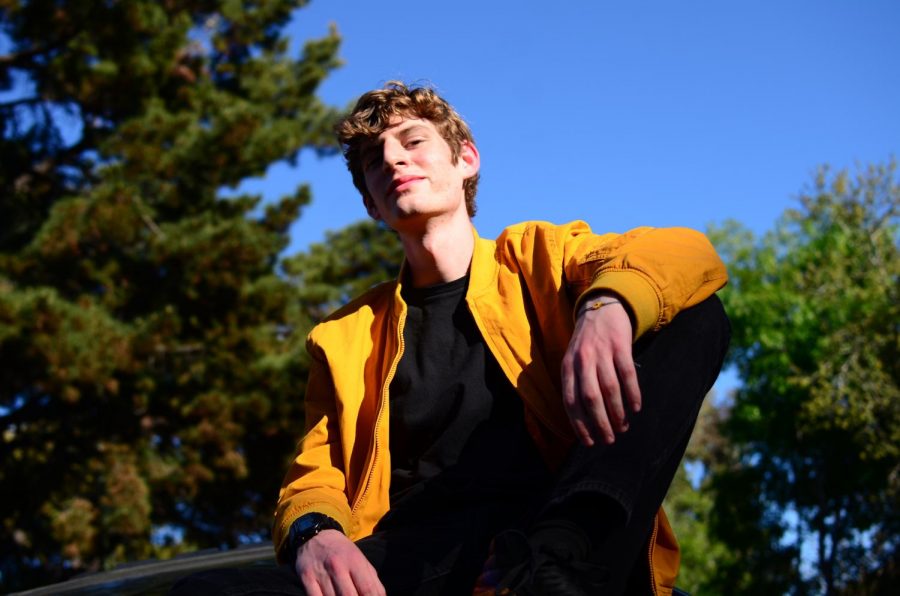 There’s something of a living legend on campus. You might not even know he’s passed you until he’s halfway across the quad. But you’ll find him, if you know where to look. You’ll hear whispers of his name around campus, and everyone has a story with him. Maybe they fist-bumped him on the way to class, or maybe they were even featured on one of his songs. He’s simultaneously a person of the people and a complete mystery.

For those who have been with him since the beginning, he was known as the kid who wore his uniform to school every day, even in the summer. He’s the kid who bought Burger King in sophomore year to protest Meatless Mondays. To those even younger, he’s the kid who performed his hit song “idc (prod. 408)” at Quadchella in a blue Adidas tracksuit during his junior year.

Either way, Nash sticks out like a french fry in a bag of Burger King onion rings. He doesn’t like to conform and never has. However, that may not have always been true.

The celebrity status began with the birth of ‘lil strype’, Nash’s rap persona, a play on the striped Adidas tracksuits he wore to school every day. In Jan. of 2019, he put out his debut song, “Kickin,’” on Soundcloud.

“Originally, when he and I got into SoundCloud and we started you know, listening to stuff and just being on there, he made his first song as a joke,” Jack said. “And I was like, well, maybe you should actually try to make a song that’s not just supposed to be funny and then it sort of became more and more serious as he tried new things and became more serious about it, actually trying to make beats and actually writing lyrics.”

It may have started as a bit of an inside joke between friends, but as the months flew by and the tracks piled up, Nash earned himself many fans and an even bigger scope of recognition. The name “lil strype” was instantly recognizable and associated with him.

Despite the satirical nature of the act, not a lot of people knew that, underneath all the self-aggrandizing and dramatics, Nash truly enjoyed music.

“I’ve enjoyed creating and performing music for a long time, and it’s always been something that I can use to express how I feel and to help me … and I feel like I’ve been able to work with my music. I’ve been able to adapt my music to how, what I want to achieve and being able to go from performing Riptide on my ukulele at Coachella to making my own rap persona, back to making ukulele songs for myself has been a journey and it’s been a relationship with music that I have found a lot of enjoyment in,” he said.

One of the highlights of the lil strype era was at prom 2019, when he got his latest song at the time, “idc (prod. 408),” produced by fellow Harker student Gowtham Irrinki (11), played at prom.

People knew his songs by heart, even sang them randomly around campus. It seemed everyone knew who lil strype was. Which is why it was as jarring as it was when, without a trace, lil strype disappeared.

In Apr. 2019, Nash put out the “Follow the Money” EP, his last EP under the lil strype moniker. He states that it felt like the end of an era, that his current emotional maturity didn’t match what he expressed through lil strype.

“It was something that I was making with an audience in mind and always making it to maybe impress people to show me as a specific type of person to other people. And that was a large theme of the music –displaying myself in a certain light and showing what I was, and that was a lot of fun for me to do,” he said. “But once I had I had done that I wanted to move on to something, like, more personal.”

While the departure was confusing, even shocking for some, Jack expressed his pride in Nash’s decision.

“I was actually really impressed by that because I think a lot of times it’s like, it’s easy to just take a joke or like take a bit too far, but I think the way he ended it … he brought it to a close and didn’t try to outstretch it, I think that made it way better,” Jack said. “It’s just a thing that we remember well and not something that he let fade out, so I think that was a really smart move for him.”

Instead Nash took time to reflect on himself, what he really wanted out of life and who he wanted to be.

“I’m really proud of myself for deciding once I’d finished my finale EP … I put as the outro track a ‘lil strype dis’, which was just a little recording of me talking about how I had accomplished what I wanted with the project and was kind of discontinuing lil strype,” Nash said. “And at that point in my life I had a summer ahead of me. And I went on Craigslist and I bought a tape recorder and a bunch of little cassette tapes. And I started recording a lot of ukulele songs in my room.”

Nash’s defining trait for the last seven years has been the fact that he wore the same outfit every day, whether that be the Harker School uniform or some colored variations of the same Adidas tracksuit. So, needless to say, when he walked in the first day of senior year having traded his trademark Adidas tracksuits for a yellow cap, round wire-rimmed glasses, cargo pants and a green bomber jacket, people were shocked.

“It was definitely very difficult but was also very relieving and rewarding … in high school, we all grow and change, and I feel like how I was outwardly expressing myself changed and lagged behind how I grew internally and emotionally and so, for a while it had been building up that I had wanted to make some kind of change,” Nash said. “Having this point where I could move on to something else was definitely a very good way for me to pivot into a new direction.”

To define this new era of adventures and music-making, Nash altered his campus image, though he still maintained the crazy and chaotic energy and character that people had come to know him for. In addition to the physical change, his persona was accompanied by a new style of music he’d developed over that summer. His music now incorporates more obsolete technology like cassette tapes and vinyl crackle. Nash feels that his newer music is more reflective of his emotions and evolution as a person, rather than a reflection of his audience.

“My music now is more honest and personal, and my music now doesn’t come with a veneer or a facade of impressiveness … instead comes from more personal and honest place, and I feel like I’ve been trying to change myself and my attitude,” he said.

Nash doesn’t quite regret lil strype in its entirety. In many ways, the persona has helped him learn and grow in ways he wouldn’t have been able to had he not been on such a journey.

“I wish maybe that earlier in my high school career I had been more honest with myself,” Nash said. “I feel like I don’t regret lil strype because it was an instrumental part in me moving forward as a person and coming to terms with myself and being able to identify the parts of myself that were more self-important or aiming to impress others – being able to identify those and then work through them, I feel like the experience was very useful for me.”

Even others track his path towards becoming himself.

Nash has always seemed like someone who belonged to the people. But, in reality, he’s just someone who loves making music to express himself, even if everyone has a different idea of who that is.

He admits that sometimes, he falls back into old habits of impressing people with his previous behavior, but says that he’s working on finding a way to be vulnerable with people more often.

“I still sometimes struggle with being an exaggeration of myself, but I feel like I’ve found a way where I can at least be somewhat reflective of who I am internally instead of being a reflection of what others think I should be,” Nash said.

Just like his character, his music is something that is constantly undergoing evolution, and while his previous songs were always directed at an audience, Nash hopes that his current content can hold more emotional weight for him personally. He intends to be a little more private in life.

“I feel like it’s just something that I want to keep to myself and just have music that I’m creating, not for an audience, but just music that I want to make to make. And as I get better at ukulele and songwriting, I feel like I might open up more. I’ve already performed one of the songs at Quadchella. And I have a couple more that I’ve been thinking about releasing and when I feel like I’m ready to release more music. I’ll get around to that when the time comes,” Nash said.