SpaceX partners with NASA to send American astronauts to space 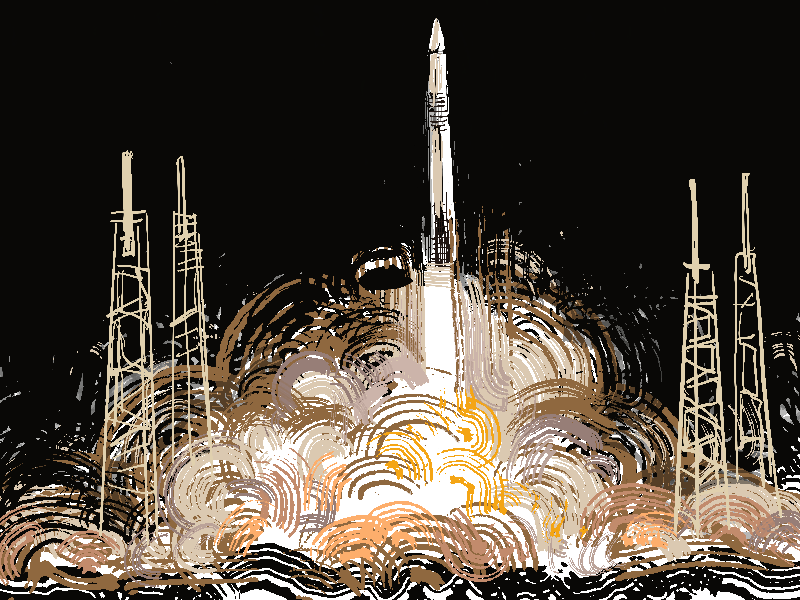 An illustration depicting Falcon 9 launching from the Kennedy Space Center in Merritt Island, Florida. The spacecraft was designed and created by SpaceX, a private American aerospace company based in Hawthorne, California.

by Mark Hu and Sabrina Zhu

SpaceX, a private American space manufacturing company, sent two NASA astronauts into space on Saturday in a launch from the Kennedy Space Center in Merritt Island, Florida, marking the first time that NASA has sent humans into space from American soil since 2011.

The Falcon 9’s booster successfully landed on the autonomous spaceport drone ship named “Of Course I Still Love You,” with the Crew Dragon capsule continuing to the International Space Station (ISS), a multi-national research laboratory orbiting the Earth.

Astronauts Douglas G. Hurley and Robert L. Behnken, who have both flown on two previous space shuttle missions and have served as military test pilots, were selected to ride on the Falcon 9. Hurley also participated in NASA’s final manned mission in 2011. The astronauts were sent to test the rocket and the Crew Dragon capsule in orbit, the final step before NASA could grant SpaceX permission to fly regularly to the space station.

The Falcon 9 model, designed by SpaceX, is the world’s first reusable rocket, which will lower the cost of space access and exploration, as expensive parts can be used in multiple launches. The Crew Dragon capsule, above the rocket, can hold up to seven people, and it plans to be the first private spacecraft to carry humans to the space station for commercial use. SpaceX was founded in 2002 by Elon Musk with the goal of reducing the cost of space travel.

“Space exploration remains incredibly important to us as a society for a number of reasons,” said Dr. Mark Brada, adviser of the upper school’s Astronomy Club. “For one, I feel like it advances technology. I believe that it gives us a venue to do research under conditions that are not reproducible on earth. But it also gives us something as a society to strive for.”

The two aerospace companies originally planned to launch Demo-2, the final test of SpaceX’s human space program, last Wednesday, May 27, at 1:33 p.m. PDT, but due to unsafe conditions because of poor weather, the event was scrubbed and postponed to Saturday at 12:22 PDT, one of their planned backup dates.

On Wednesday, there was light rain throughout the morning, which cleared up just 15 minutes before the set launch time. However, weather officers decided that the conditions would not be safe until ten minutes after schedule; the later liftoff would prevent the rocket from meeting with the International Space Station, forcing it to be postponed.

“We had, just simply, too much electricity in the atmosphere. There wasn’t really a lightning storm or anything like that, but there was a concern that if we did launch, it could actually trigger lightning,” said Jim Bridenstine, the Administrator of NASA, in a statement following the postponement.

Although American astronauts have been occupying the ISS, this historic event marked the first time in nine years that astronauts were sent to space from within the United States on an American rocket.

“It was definitely something that I would never forget,” Emily Zhou (10), an officer of Astronomy Club, said. “This is the first type of launch I’ve actually seen live before, so when SpaceX launched smoothly and successfully, I wasn’t expecting to hear claps in the background, but when I did, it honestly made me so happy.”

Although NASA shut down its manned missions in 2011, growth in the sector of aerospace research has continued through private companies. These newer companies have the potential to help humans with the development of space exploration.

“I personally feel space exploration will only grow in terms of impact on leading research and society in general,” Anirudh Kotamraju (10), who has been following NASA’s efforts since a young age, said. “With private companies like SpaceX and Blue Origin partnering with government organizations, the idea of commercializing space travel is becoming more and more of a reality. In the short term, it may be restricted to high paying clients, but the ultimate goal would be making space tourism an industry.”