Stories from quarantine: A game night to remember 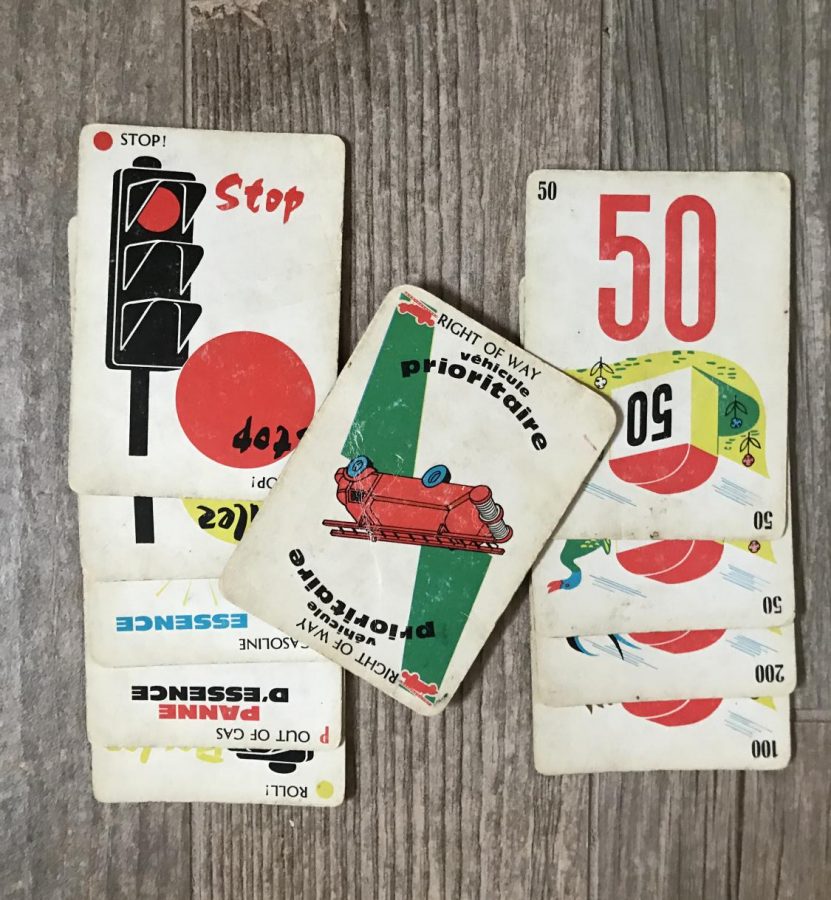 Even though I spent every day at home with them, the only time my family congregated, if ever, was for short dinners. These game nights made me appreciate my family more and realize that a 15 minute dinner is not a sufficient amount of time with them.

Faded primary colors fill the different pictures and numbers on the six cards in my hand. In front of me, more cards lay stacked on top of each other, each with a different word written in a black graffiti font. I unknowingly toy with the fraying edge of one of my cards as I watch my dad contemplate his next move. Then, he draws his middle card and places it in front of me: a picture of a red traffic light and the word “stop” at the top left of the card.

Though normally I would be frustrated by his play against me, I share a small smile with my sister as I eye the leftmost card in my hand. The green and white background of the card contrasted the red truck in front of it and the words “right of way” are written in an arc at the top. My family stares at me expectantly, waiting for a reaction, and I pause momentarily before flipping around the wildcard for everyone to see and announcing my victory: “Kufre!”

Being quarantined during spring break prohibited me from doing my usual vacation activities, such as hanging out with friends and going out to eat at my favorite restaurants. So instead, my family suggested we start a game night tradition. Along with Milbourne, a family-favorite card game that involves players attempting to reach the goal of 1000 miles, we also played Pictionary, Codenames and completed two puzzles.

Originally, the idea of a game night didn’t entice me. I had never been a huge fan of board games, preferring to curl up in a blanket reading a good book or having a movie marathon. To me, game nights seemed like a futile attempt by my parents to force family bonding and prevent my incessant Netflix binge-watching. And in a way, it was exactly that.

What I didn’t expect was to be completely invested by the second night. As the last days of spring break approached, I found myself wishing for more game nights, and not just because of how much fun the games were. Even though I spent every day at home with them, the only time my family congregated, if ever, was for short dinners. These game nights made me appreciate my family more and realize that a 15 minute dinner is not a sufficient amount of time with them.

Although I’ll be overjoyed that I can see my friends or go to my favorite restaurants again once shelter in place is over, I’m definitely going to miss the side effect of forced family bonding. Being stuck at home has taught me that spending quality time with my family is important, and that won’t change after quarantine ends.