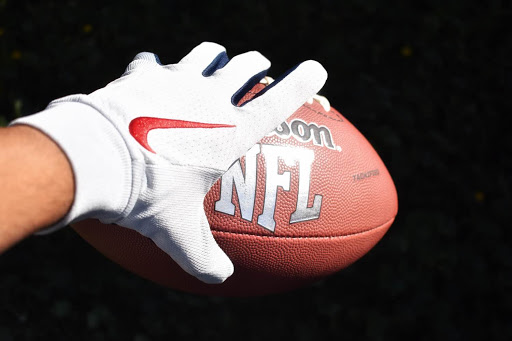 Round 1 of the NFL draft will take place today, from 5 p.m. to 8:30 p.m. PST.  The draft will be in a fully virtual format due to the coronavirus and will be airing on ABC, ESPN, and NFL Network.

This concludes Harker Aquila’s coverage of the top 15 picks of the 2020 NFL Draft.

7:04 p.m. The Denver Broncos have selected Alabama wide receiver Jerry Jeudy with the fifteenth overall pick. Jeudy was projected to go higher in the draft, but the 49ers, Bucs, and Raiders did not select wide receivers. Jeudy is regarded as one of the best route-runners in college football, and will provide a boost to a Broncos offense that is rebuilding. Jeudy’s speed and ability to burn past defensive backs is also critical in an age where players such as Kansas City Chiefs wide receiver Tyreek Hill are becoming vital pieces on championship teams.

7:01 p.m. The San Francisco 49ers have selected South Carolina defensive tackle Javon Kinlaw with the fourteenth overall pick after acquiring it from the Tampa Bay Buccaneers. Kinlaw will make a 49ers defense, which was top two in the league last year, even stronger, and he will fill the void left by the departure of DeForest Buckner, who was traded to the Colts to acquire this pick. Many analysts predicted that the 49ers would pick a wide receiver, either Jerry Jeudy or CeeDee Lamb. The 49ers instead found a cheaper and younger replacement for Buckner in Kinlaw to reinforce their sturdy defensive line.

6:53 p.m. The Tampa Bay Buccaneers have selected Iowa offensive tackle Tristan Wirfs with the thirteenth overall pick after acquiring it from the San Francisco 49ers. Wirfs is a solid pick for a Buccaneers team that has become loaded with talent after the recent additions of star quarterback Tom Brady and star tight end Rob Gronkowski. Wirfs will provide Tom Brady with necessary protection, being labeled as a “freak” athlete, measuring in at 6’3’’ and over 300 pounds. His protection can greatly help a Buccaneers team that is poised to make a deep playoff run.

6:42 p.m. The Oakland Raiders have selected speedy Alabama wide receiver Henry Ruggs with the twelth overall pick. Ruggs is the fastest player in the entire draft class, and he ran a 4.28 second 40-yard dash at the NFL combine. Comparisons have been made between Ruggs and Chiefs wide receiver Tyreek Hills, as both receivers have “game-breaking” speed. His high potential caused him to be picked before fellow wide receivers Ceedee Lamb and Jerry Jeudy, whom he was originally projected to go after.

6:35 p.m. The New York Jets have selected Louisville offensive tackle Mekhi Becton with the eleventh overall pick. Becton is one of the most unique athletes in the draft, as he ran a 5.10 40-yard dash while weighing in at over 350 pounds. Becton will be a reliable tackle for a Jets team that relies on the run under star running back Le’veon Bell. Becton’s selection is monumental for Louisville’s program, as he is one of the highest selected alumni in program history.

6:28 p.m. The Cleveland Browns have selected Alabama offensive tackle Jedrick Wills with the tenth overall pick. Wills is part of an elite class of offensive tackles in this year’s draft, which is led by Andrew Thomas (selected by the New York Giants) and Mekhi Becton. Willis can provide a boost to an extremely talented Browns team with the likes of Odell Beckham Jr. and Baker Mayfield. His tenacity and athleticism make him a good pick for a struggling offensive line.

6:24 p.m. The Jacksonville Jaguars have selected Florida cornerback C.J. Henderson with the ninth overall pick. Henderson was projected to be a mid-to-late first round pick due to some concerns about his strength, but his wingspan and football IQ allows him to make plays on the ball.

6:19 p.m. The Arizona Cardinals have selected Clemson linebacker Isaish Simmons with the eighth overall pick. Simmons is known to be one of the most versatile defenders football has seen in the past years, and he showed off his athleticism at the NFL combine with a 4.39 second 40 yard dash and a 39 inch vertical jump. His physicality and tackling prowess make him the best linebacker in this year’s draft class and an exciting prospect for the Cardinals.

6:14 p.m. The Carolina Panthers have selected Auburn defensive tackle Derrick Brown, who measures in at 6-5 and 314 pounds. He is an exciting prospect for a Carolina defense that hopes to return to its lockdown defense days just a few years earlier. Brown is also productive against the run and is known for his ability to go after quarterbacks.

6:03 p.m. The Los Angeles Chargers have selected Oregon quarterback Justin Herbert with the sixth overall pick. Herbert was projected to be the first quarterback picked in last year’s draft before he surprisingly decided to return to Oregon for his senior season. Herbert’s exceptional arm strength combined with his 6’6’’ frame could make Herbert a strong force in the league. Herbert is also the second player in Pac-12 history to win the “Academic Heisman” award, maintaining a 4.01 GPA with a degree in General Science.

5:56 p.m. The Miami Dolphins have selected Alabama quarterback and Hawaiian native Tua Tagovailoa with the fifth overall pick. Comparisons have been made between Tagovailoa and Hall of Fame quarterback Steve Young, as both quarterbacks are extremely mobile and left-handed. Tagovailoa’s college career was impressive, as he demonstrated the ability to throw on the move with accuracy. Yet he has dealt with eight injuries throughout his college career, from a sprained knee all the way to a dislocated hip this past season that caused NFL teams to question his reliability.

5:50 p.m. The New York Giants have selected Georgia offensive tackle Andrew Thomas with the fourth overall pick. Thomas is part of a very strong offensive tackle class this year, which also features Jedrick Wills and Mekhi Becton, who played for Alabama and Louisville, respectively. Many believed that Thomas would be selected later in the first round. Thomas will be a useful weapon for a Giants team that relies on a powerful running game involving last year’s 2nd overall pick Saquon Barkley.

5:38 p.m. The Detroit Lions have selected Ohio State cornerback Jeff Okudah with the third overall pick. Okudah is considered to be the best cornerback in this year’s draft and even earned the distinction as the best corner in the class of 2017. He is regarded as a shutdown corner who excels in press-man coverage. So far, all three picks have played at Ohio State at some point in their careers. Comparisons have been made between to Pro-Bowl defensive backs Denzel Ward and Marshon Lattimore.

5:33 p.m. The Washington Redskins have selected defensive end Chase Young, who is widely considered to be the best player in the entire draft class, with the second overall pick. He set the single-season sack record at Ohio State last year and led the nation with 16.5 sacks. Young was also in discussions as a Heisman Trophy contender, but ultimately lost against first overall pick Burrow. Nevertheless, he won the Big Ten Player of the Year award. Young is exceptionally disruptive in both the run and pass game, and comparisons have been made between Young and Pro-Bowler Jadeveon Clowney.

5:25 p.m. The Cincinnati Bengals have selected quarterback Joe Burrow with the first overall pick. Burrow was the presumed number one overall pick this year, and nearly all mock drafts had him going to the Bengals first overall. He won the Heisman Trophy, college football’s equivalent of the MVP award, last year. Burrow played at Ohio State initially before transferring to LSU, where his college career took off. Before last year, Burrow was projected to be a sixth round pick but following a stellar senior season, in which he threw for over 5600 yards and 60 touchdowns, his draft stock skyrocketed.

4:30 p.m. The 2020 NFL Draft is set to take place at 5 p.m. today in a fully virtual format due to the coronavirus and will be airing on ABC, ESPN, and NFL Network. The first round of the draft will be taking place today and will run up to 8:30 p.m., while the following rounds are scheduled for tomorrow and the following day.

The NFL has partnered up with Microsoft, and the teams will be using a modified version of Microsoft Teams to make player selections as well as communicate with the league. The NFL has also turned the draft into a fundraiser for coronavirus relief efforts, with funds going to six different organizations.

Here on Harker Aquila, we will be providing live commentary and reactions to the first 15 picks of the first round.