Humans of Harker: Contending with a purpose 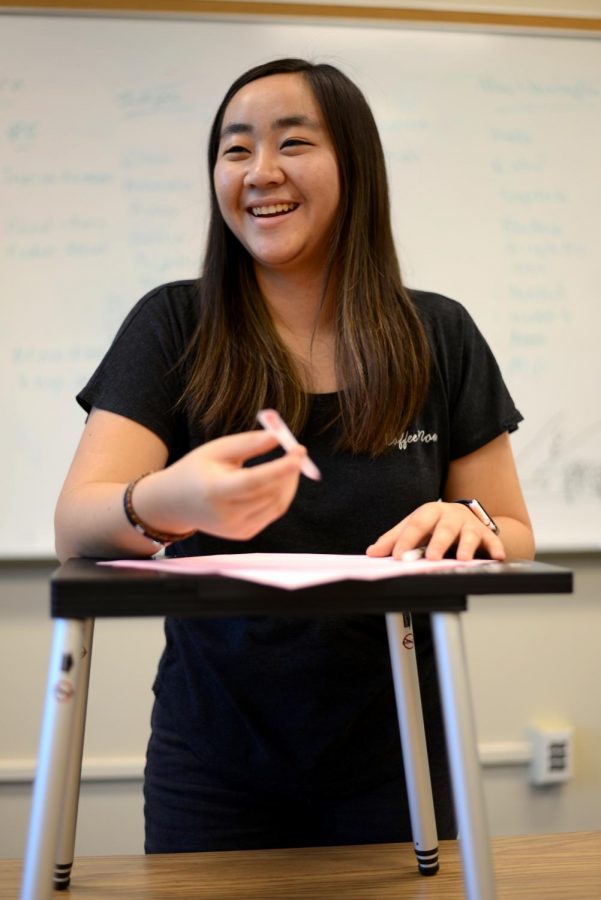 “My mom always says, ‘don’t shortchange yourself’, [since] I feel like within Harker, there’s always the idea of not being good enough ... I think my mom does a really good job of encouraging me, because ... sometimes I get swamped in with the Harker culture. She tells me to focus and do what I can do, and that it’s going to be okay,” Amanda Cheung (12) said.

Amanda Cheung (12), surrounded by her sixth and seventh-grade mentees in the Introduction to Speech and Debate class, eagerly guides them through outlining a successful debate. They vigorously type their debate outlines around her as she leans over and suggests changes to strengthen their arguments. Her face lights up with satisfaction as she observes her vision come to life: building a strong and genuine connection within the debate community.

Amanda was initially reluctant to join the debate club in sixth grade. It was because of her mom’s constant pestering that she finally attended her first club meeting.

“It’s actually kind of funny because my mom forced me to go to the [debate] informational meeting. She wanted me to try it out, but I really didn’t want to do it at all. Eventually, she made me go to a tournament and I actually enjoyed it … I just never stopped,” Amanda said, laughing.

Nevertheless, as she progressed through debate in middle school, she began to feel isolated from her older peers. Without a friend in the community that she could ask for help, tournaments became less enjoyable.

“When I first joined, I didn’t really have that kind of support, especially because I was a sixth grader. Everyone was kind of daunting, and no one really reached out,” said Amanda.

As Amanda matured through years of experience as a debater, she decided she wanted to make a change. Now, as captain of the team, she takes the first step and regularly checks in with her teammates to ensure that they feel supported.

“I try to [make a change] within the team or people that I’m friends with. So by that, I mean talking to people, checking in on people [and] making sure that they feel comfortable in the debate community,” Amanda said. “Now that I’m an upperclassman, I’ve really tried to be more inclusive, and I think I’ve developed a lot more bonds with people.”

This instinct to reach out and talk to others when they need help is not new to Amanda. Ever since she was young, she has enjoyed getting to know her peers better and building closer relationships with them. As she’s gotten older, the habit has only grown more frequent.

“I feel like I’ve liked making friends since I was young. But I guess as I got older, I liked making deeper connections. It’s like that cheesy quote: ‘quality over quantity.’ I’ll actively try to make new friends and start trying to get to know them better,” Amanda said.

Throughout her years debating, Amanda’s favorite part has been meeting new people from several different schools and districts.

“[Debate is] a very interactive and inter-school activity. The tournaments usually have around 30 to 40 schools. And even over the summer, I’ll go to debate camps and meet a lot of people,” said Amanda. “I’ve been able to meet a lot of people that are different from Harker people in terms of what school they go to and their background. It allowed me to reach out to people who I probably otherwise wouldn’t have met.”

Nonetheless, one of Amanda’s biggest struggles during high school has been balancing her work and her social life. Especially during debate, since she always has to compete with a partner, she finds it difficult to define the boundary between being serious and goofing off.

“Something I always found difficult in debate was finding a consistent partner … Because I started off with all my partners as friends, it was really hard for me to figure out how to balance the activity versus having a friendship,” Amanda said.

Similarly, as co-captain of the tennis team, Amanda aimed to not only be a good leader, but to also build an inseparable bond with her team.

“The team was originally not very serious. It was hard the whole season because [I was] being more strict,” Amanda said. “I was really close to everyone so it was really hard for me to be more of an authoritative figure and find that balance between that and being friends with everyone.”

Gina Partridge (12), a close friend of Amanda’s and co-captain of the tennis team, notes how their similar interests make it easy to relate with one another.

“We’re really close to each other and we vent to each other a lot … It’s just nice to have someone to talk to who understands what I’m going through because we’re doing it together,” said Gina.

As the captain of two prominent teams in Harker, Amanda has developed strong leadership skills. Another one of her friends, Srivani Vegesna (12), who has known her since kindergarten, especially admires Amanda’s poise and charisma.

“I really look up to Amanda,” Srivani said. “She’s definitely a leader. She leads really well and she’s very confident in her speech and everything so that’s why I feel like she had that kind of presence about her.”

Along with leadership, Amanda also gained the ability to manage her time efficiently. Katy Rees, Amanda’s Honors US History teacher in 11th grade, complimented Amanda on how proactive she was with her workload.

“[She’s] very organized and on top of her work … One thing that impressed me early on is how self-sufficient she was in terms of coming into office hours, reflecting on her work and working ahead on assignments,” Rees said.

Amanda’s friends have always been extremely encouraging and supportive of her endeavors. Even during the process of college applications, they always had each other’s backs.

“We’re all really close … I think one really good thing that happened recently was with the admissions process. It was really stressful but we were all super supportive of each other …  I felt like I could count on them,” Amanda said, recalling the previous events of this school year.

In her later years of high school, Amanda has also begun to rely on her family for help and advice.

“I think my family and I have really bonded over the last couple years. As I grew older, I realized how much I value them and we’ve grown really close,” said Amanda.

Whether it was dragging Amanda to her first debate meeting, cooking tasty home-cooked dinners or being a figure of guidance when she needs it, Amanda’s mom plays a huge role in her daughter’s life. One piece of advice that she has given Amanda has heavily influenced Amanda’s mindset throughout high school.

“My mom always says, ‘don’t shortchange yourself’, [since] I feel like within Harker, there’s always the idea of not being good enough … I think my mom does a really good job of encouraging me, because … sometimes I get swamped in with the Harker culture. She tells me to focus and do what I can do, and that it’s going to be okay,” Amanda said.