Humans of Harker: Humming with passion 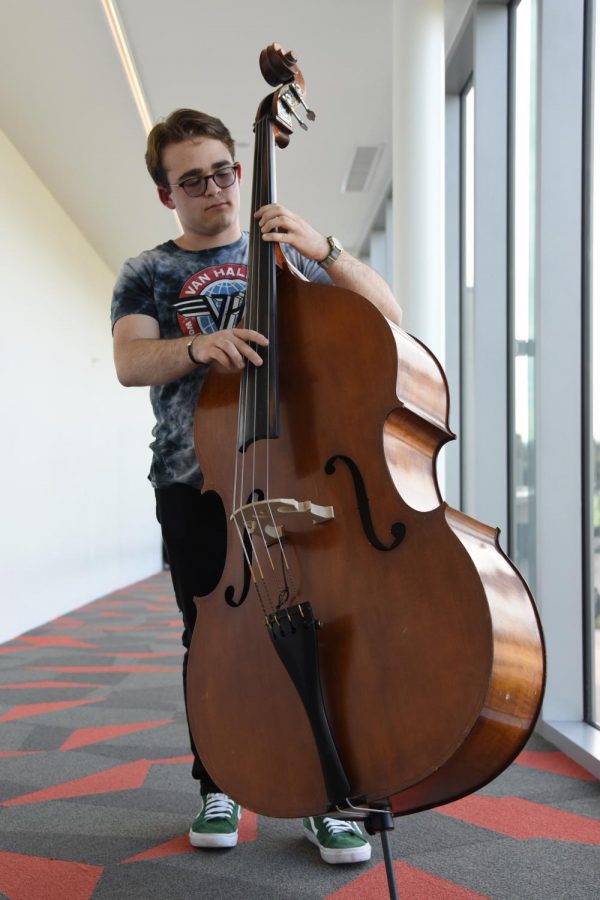 “[Riding motorcycles] really showed me that it doesn't matter what I want to do, as long as I put my mind to it, I can really get to know the task and become good at it. When we go on group rides with my dad and my brother . . . we have to learn our own weaknesses and each other's weaknesses. And that's a big part of understanding, first of all, who we are and how we are able to interact with each other in a new environment,” William Rainow (12) said.

When you hear the word “bass,” what do you imagine?

Perhaps, a polished, wooden, lowest-pitched string instrument featured under low-beam lighting in your favorite jazz cafe. Or maybe, a glossy, four-stringed Aria Pro II guitar strummed under the spotlights during your annual HOSCARS.

For William Rainow (12), either answer works.

William’s musical journey began at age four, where he and his twin brother Thomas Rainow (12) started playing the piano. They continued piano until finishing the MTAC curriculum in seventh grade.

After piano, William picked up the electric bass, which he taught himself, and also later the upright bass, through which he pursued more jazz music. William plays currently with the Jazz Band.

Most seniors know William’s utter passion for music. But his free time is not just spent on electric basses or upright basses. It is also devoted to another device with a hum: a motorcycle.

William was introduced to motorcycles by Thomas who wanted to first restore a car. When a junk car was out of the option for their parents, Thomas resolved to build a motorized bicycle. Over time, Thomas began developing new skills and moved on to motorcycles, all the while intriguing William.

“Our relationship is really centered on that, that we’re interested in what each other are doing. And we’re … not secretive, we talk about everything. So if I get into a new hobby or interest, he’s just innately going to be part of that,” Thomas said.

Soon, motorcycles became a family bonding activity. Their father would not allow them to ride a motorcycle without first understanding the dangers of the vehicle himself. As a result, motorcycle-riding became a shared experience between the three, spending time together in South San Francisco.

William’s experience in learning how to ride motorcycles and obtaining a motorcycle license put personal growth and cooperation in a new perspective.

“[Riding motorcycles] really showed me that it doesn’t matter what I want to do, as long as I put my mind to it, I can really get to know the task and become good at it,” William said. “When we go on group rides with my dad and my brother . . . we have to learn our own weaknesses and each other’s weaknesses. And that’s a big part of understanding, first of all, who we are and how we are able to interact with each other in a new environment.”

Whether it is spending time with family or being there for friends, William emphasizes the value of reaching out to and communicating with people.

“He’s selfless. Even if he’s not doing the best, he makes it his goal to make sure that he’s making someone else happy or making someone else’s day,” good friend Grace Hajjar (12) said. “That is amazing, and I respect him so much for doing that because it just shows how much he cares about other people and the amount of love in his heart.”

William’s emphasis on compassion and kindness also follows him in his volunteering experiences. He has volunteered at the Ronald McDonald House, working with terminally-ill children, and currently helping out as a general volunteer at Santa Clara Valley Medical Center.

“I see a lot of the behind the scenes that people often overlook . . .  I was volunteering [at the Santa Clara Valley Medical Center] when the Gilroy shooting happened, and I saw a lot of the victims,” William said. “[I see also] a lot of negligence in general for people who need help to find safety and health care. And I see a lot of those interactions I can see how people react to feeling safe and feeling like they’re cared for. I take note of that and try to do the same to people.”

William’s sense of service and readiness to help others is present also in his school work. Former sophomore chemistry teacher Andrew Irvine reminiscences William actively helping his peers with labwork when they needed help.

“When I think about success in adulthood, in college, I think about the character and the attitude of William. It’s not about your grades. It’s not about what course you took here at Harker. It’s about how you apply yourself and your attitude, and having a goal and not letting go of that goal—no matter what,” Irvine said. “He’ll be a very accomplished adult because of his attitude, grit and commitment.”