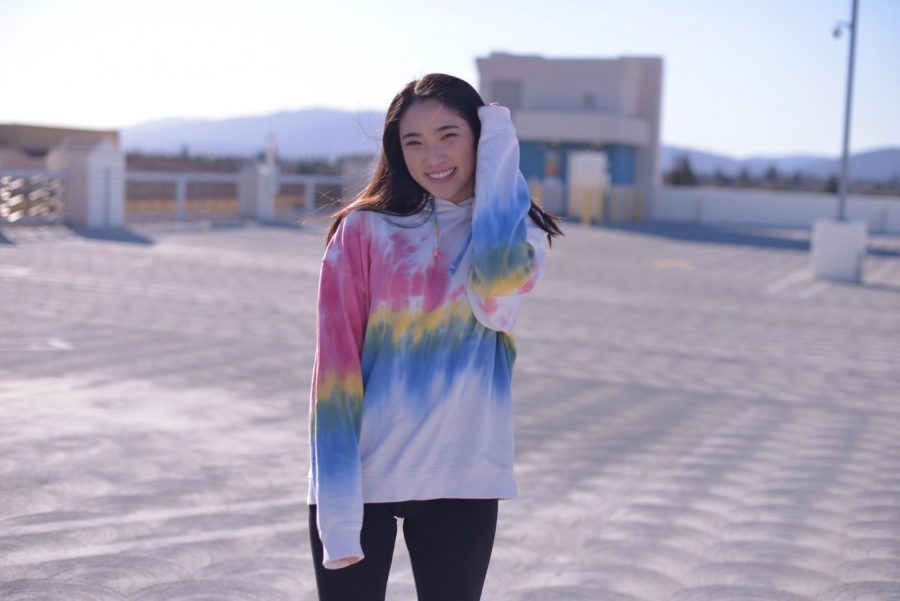 “Downbeat has taught me to be more confident in myself and to also take risks on stage without worrying about what others might think. When I get out of my head and stop thinking about how others will perceive me, performing is actually so fun and engaging. You can take on so many different roles and personas, and finding the right balance for the character you’re trying to portray while still including your own personal flair is truly a challenge but honestly one of the most interesting experiences I’ve had,” Emily Chen (12) said.

Sitting in the downstairs of Dobbins, Emily Chen (12) recounts stories from her childhood, beginning with one describing how she found her passion for singing. She fiddles with her marble PopSocket and laughs, adding in that she only went to choir at the beginning “for the friends and snacks that they give at break.”

About 12 years ago, she moved into a new home and her mother was approached by a neighbor carrying three large zucchinis. The neighbor saw Emily and asked about her age. Upon hearing that she was five, she encouraged the young girl to join her choir and since then, Emily has explored her passion for singing.

Along with singing in one of the upper school’s choirs Downbeat, Emily incorporates writing into her life through both journaling and yearbook. She began Downbeat and yearbook in her sophomore year, whereas she became interested in journaling the first semester of this year in her Poetry and Fiction class.

For around 20 to 30 minutes each day, Emily writes in her journal regarding her day, feelings or a special event.

“I’ve just been writing journals so I have a book full of journal entries now,” Emily said. “I still do it even now and the class is over, so I’m just really surprised at myself. I cannot believe I dedicate time to writing in journals, but it’s really therapeutic.”

She has also been able to hone her writing and design skills on the yearbook staff where she serves as Co-Editor-in-Chief. Being part of the journalism program has allowed Emily to connect more with the school community and improve her work ethic.

“Besides staff members, not many people know this, but the work that goes into every single page takes time and love — as cheesy as that might sound,” she said. “Yearbook has pushed me to work hard and continuously revise that work in order to create something that we can share with our community and genuinely be proud of.”

Emiko Armstrong (12), who has known Emily since kindergarten, noted the dedication that the senior puts into all her tasks despite her not outwardly showing it.

“She’s very hardworking. I don’t think that’s a minor detail, but it’s something that she doesn’t really show the world,” Emiko said. “She comes in very stressed, but I know I always know how hard she’s worked to get where she is. She makes everything externally seem easy, but as long as you know her, you know she works really hard at everything she does.”

Apart from yearbook, Emily has been an active member of the performing arts department; she currently performs in Downbeat and previously participated in the lower school choir and Dynamics and Harmonics in middle school.

“The feeling of being on stage is just like [an] adrenaline rush,” Emily said about her experience performing. “When you’re on stage, your mind is just blank and you have to rely on muscle memory and like all your practice, but it’s so fun. The spotlight’s just on you so you can’t see anything so it’s like you’re dancing around by yourself.”

One of Emily’s close friends, Allison “Allie” Lee (12), has observed Emily’s growth as both a performer and friend since they met in freshman year.

“She’s definitely energetic and outgoing offstage but it’s more amplified onstage,” Allie said. “I don’t think she’s changing herself. I think she’s choosing to amplify a different part of herself onstage and it’s cool seeing different aspects of her: when she’s with her friends or versus when she’s performing and she looks a lot more confident.”

Anna Miner (12), who Emily has known since sixth grade, notes the senior’s modesty and independence that she has gained as she learned to set her own path.

“She’s definitely super humble, she doesn’t like to say she’s talented even though she obviously is,” Anna said. “She’s not afraid to go out there and try something new in dance or anything like that. She was very reserved and used to heavily rely on others to set the path for her but now, she creates her own, and she is okay with being a leader.”

Through both yearbook and Downbeat, Emily has learned to come out of her shell and become more confident in her actions. She now strives to show the community what she has accomplished in the two activities and display her own personal growth.

“Downbeat has taught me to be more confident in myself and to also take risks on stage without worrying about what others might think. When I get out of my head and stop thinking about how others will perceive me, performing is actually so fun and engaging,” Emily said. “You can take on so many different roles and personas, and finding the right balance for the character you’re trying to portray while still including your own personal flair is truly a challenge but honestly one of the most interesting experiences I’ve had.”