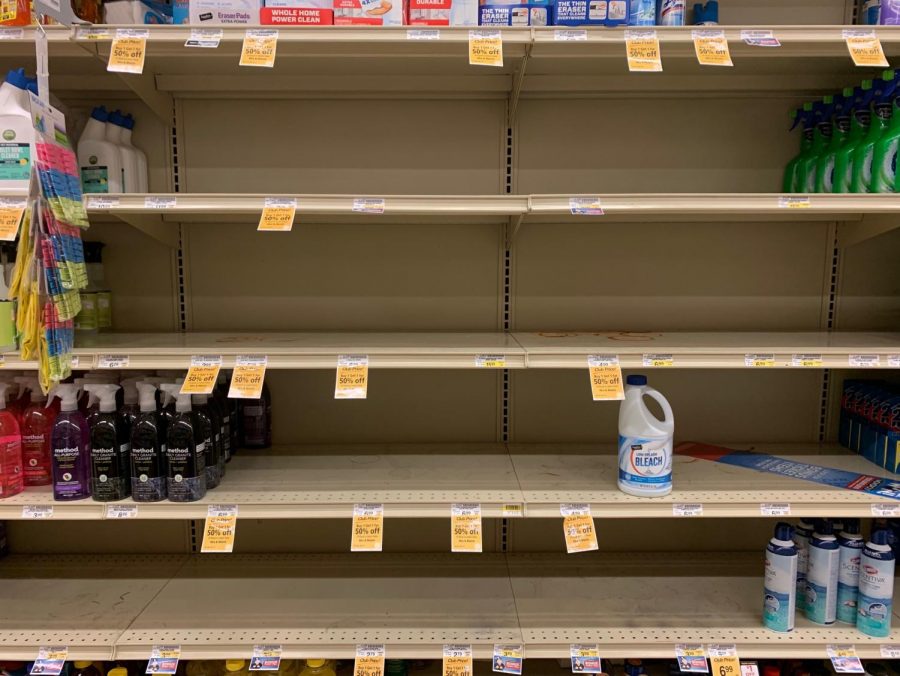 A shelf for soap, bleach and disinfectant is almost cleared out at a local Safeway. The shelter-in-place order mandates that individuals must remain in their residence unless performing “essential” activities, which include grocery shopping, obtaining healthcare, or performing a job for an “essential business."

by Mark Hu and Aditya Singhvi

The Santa Clara County Public Health Department announced a “shelter-in-place” directive for all residences yesterday, joining five other Bay Area counties as the number of COVID-19 cases rose to 155 within the county and 4,226 nationally.

Six counties — Santa Clara, San Francisco, San Mateo, Marin and Alameda —  issued similar orders yesterday, effective as of 12:01 a.m. today and in place until April 7. The order, which can be read in its entirety here, mandates that individuals must remain in their residence unless performing “essential” activities, which include grocery shopping, obtaining healthcare, or performing a job for an “essential business”.

“We were seeing a tipping point here in Santa Clara County with exponential growth of our cases,” Santa Clara County Public Health Officer Dr. Sara Cody said during a news conference on Monday. “We decided collectively we need to take swift action as soon as possible to prevent further spread.”

In addition, all businesses — exempting “essential businesses” such as grocery stores, laundromats, and delivery-based restaurants — were instructed to cease physical operations. All public and private gatherings of “any number of people” are also no longer permitted. Violation of the orders is considered a misdemeanor, punishable by a fine or imprisonment.

Individuals are still allowed to engage in outdoor activity — such as hiking and running — provided they follow social distancing procedures, which the County defines as maintaining a distance of at least six feet from others.

In an email sent out to Harker families at 5:10 p.m. yesterday, head of school Brian Yager assured parents that the shelter-in-place directive would not affect the remote learning routine, which began yesterday for students across all four campuses.

“We will be reducing our staffs at each campus, and there will no longer be in-person front desk coverage,” Yager wrote. “The Mayor of San Jose’s announcement clarified that we can remain open for teachers who need resources on campus.”

In preventing non-essential gatherings, the directive also effectively bans students from interacting in-person, although many have been communicating via apps like Zoom or FaceTime instead. In a Schoology announcement today, the counselors suggested several ways to combat “social isolation” and “anxiety” for students at home, including following a routine, exercising, staying virtually connected with friends and setting aside time for self-care.

Student-athletes who planned on informally meeting with teammates to practice their spring sports over the remote learning break are also moving towards individual workout options.

“[I’m] going to throw every day and probably do a lot of catcher’s work because I have the gear with me,” Nicholas Coulter (11), captain of the varsity baseball team said. “I’m also going to practice hitting at least 3 times a week.”

This action represents a larger movement towards “flattening the curve,” which refers to the concept of slowing the spread of the virus so as to not overwhelm the healthcare system, allowing patients to receive adequate care.

“The scientific evidence shows that at this stage of the emergency, it is essential to slow virus transmission as much as possible to protect the most vulnerable and to prevent the health care system from being overwhelmed,” the directive states. “By reducing the spread of the COVID-19 virus, this Order helps preserve critical and limited healthcare capacity in the County.”

This is a developing story. Check Harker Aquila for more updates.