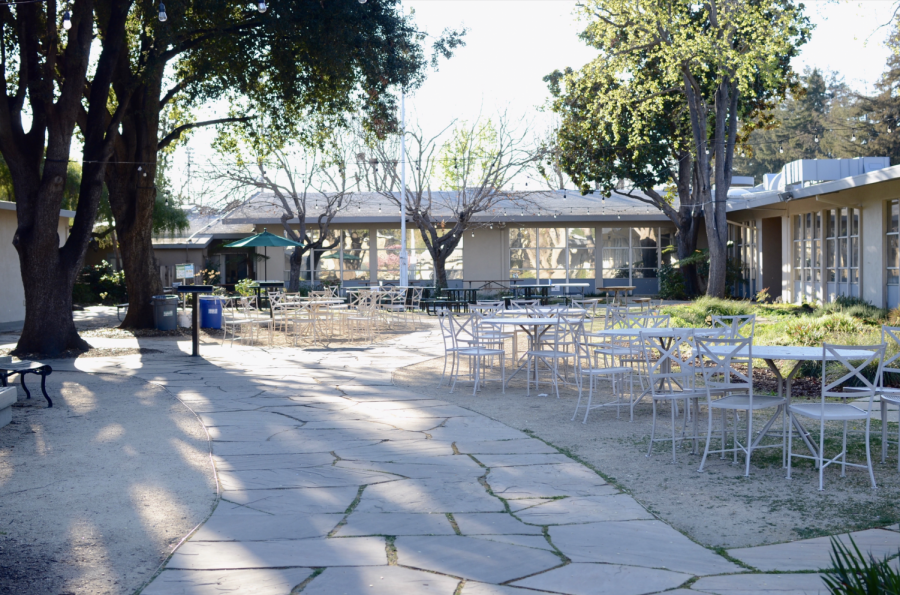 The quad after school today. The upper school will be closed to all students beginning tomorrow following a reported case of COVID-19 in the family of a non-teaching staff member.

All four of Harker’s campuses will be closed for students after classes today after a parent of a non-teaching staff member in the upper school, with whom that staff member lives, tested positive for the novel coronavirus COVID-19.

At the moment, it is not clear who the staff member is. Classes will not be taking place tomorrow to allow for a deep-cleaning of the upper school campus and to give staff members time to adjust and prepare for the transition to virtual learning.

Classes will resume with all program delivery shifting online by Monday long lunch. The length of the closure is currently unspecified, but in an email to parents, head of school Brian Yager said it would likely extend through spring break. After school and other extracurricular activities have been modified or canceled to accommodate the shift to remote learning.

“We said a week ago in our plan that if [a confirmed case in the Harker community] happened, we would close school, so we’ve been preparing for that possibility and have hit that threshold,” Yager said. “Obviously it’s disruptive to close school, and it will change the way we do things to close school physically, but now we go to that remote learning model, and the teachers will make the most of it.”

The administration will be working with health authorities to make a more accurate assessment of the closure’s duration. Updates will be sent to families tomorrow and Monday, and further information will be posted on an FAQ resource page, which will be made available by Tuesday.

An email was sent to upper school students and parents by head of upper school Butch Keller at 5:06 p.m. providing a checklist of logistical preparations and a sense of how the online learning model will work.

Monday will be a D day, and the bell schedule will remain the same. Links to Zoom meetings will be posted on Schoology, and instruction and assessments will take place per the teachers’ discretion. Teachers will also maintain continued communication about the logistics of their virtual classrooms.

“I’m going to be responsible for checking in kids on Zoom on Monday and having some sort of educational experience for them to do,” upper school chemistry teacher Andrew Irvine said. “I expect to do a synthesis of some Mr. Irvine Zoom time, some resources I’ll provide on Schoology and later follow up with more videos.”

Teachers will take attendance in the first 10 minutes of class. If a teacher reports a student absent for their online class, attendance coordinator Scott Engelhardt will use standard protocol and call the student’s home inquiring about their whereabouts.

“[Teachers] are encouraged to use a variety of pedagogical approaches to achieve the same learning objectives as if we were in person,” Keller wrote in the email.

This weekend, students are encouraged to ensure that they have a reliable internet access, can access email, Schoology and Google Drive from their computers, turn on Schoology notifications and download the Zoom application.

In the email, Keller encouraged students to reach out to their advisors if they encounter difficulties with their online coursework.

Upper school Academic Dean Kelly Horan also created a link to a Google form for students to submit questions, comments and concerns after reading Keller’s email. She will be creating an FAQ for students to discuss during advisory on Monday.

“The administration has spent a great deal of time with the tech department,” Dean of Students Kevin Williamson said. “This is new grounds and territory for all of us, so we’re going to learn as we go, but I think we have found ourselves in a much better place preparing for this as best we could on a moment’s notice.”

All sports practices will be temporarily paused until further notice, and any sports games that were scheduled during this shutdown will be attempted to be rescheduled for a later date.

Throughout the week, community outbreaks of COVID-19 have spread across the U.S. as well as other countries, reaching a total of 125,048 confirmed cases worldwide in 117 countries as of 10 a.m. CET today and attaining the status of “pandemic” from the World Health Organization. With 1,215 confirmed cases and 36 deaths in the U.S. as of today, which marks a significant surge in the past week, upper school students, faculty and families alike have been monitoring the situation with rising concerns.

Prior to the announcement of closure, junior class dean Carol Green announced to students that their class meeting, which was scheduled for tomorrow, would be taking place in small advisory groups through Zoom to practice social distancing and Zoom virtual meetings. This event has thus been cancelled as school is entirely cancelled for tomorrow.

Harker Robotics set out yesterday towards the CVR Regionals robotics competition in Fresno. Upon arriving at the site, the group was notified today morning that the event would be cancelled by the organizers, and students arrived back on campus at around 3:30 p.m. today. The remainder of the robotics season was simultaneously cancelled as a precaution, including the world championship.

“It’s definitely disappointing because we’ve worked so hard to design, build and code the robot,” Chloe Affaki, the machining director of Harker Robotics, said. “The bus ride back was pretty uplifting though; we were all just trying to ignore our loss and boost morale.”

The Park, Paint & Party event that was previously scheduled for this weekend and hosted by senior class council was also canceled yesterday.

“We just decided that it’s better to be safe and not hold the event when the number of people infected is just growing exponentially,” senior class president Roma Gandhi said.

This morning, all upper school attendees for the California Junior Classical League state convention in Irvine on April 17 were told that school administration has asked that the trip to states, as well as the trip to California Regional Certamina Rounds on March 21, the qualifier for the convention certamen tournament, be cancelled.

Harker alumni gathering events and alumni visits by Mr. and Mrs. Keller scheduled for this spring in Boston and New York remain tentative.

“As of right now, things are up in the air and nothing has been finalized in terms of cancellations,” Director of Alumni Relations Kristina Alaniz said. “If anything, they would just be postponed. We would rather postpone the events and wait for things to calm down a bit.”

The annual orchestra trip, which planned to go to Carnegie Hall in New York City from March 27 to April 2, has been canceled along with the Nanoseed Benefit Concert, which was scheduled to occur tomorrow in the Rothschild Performing Arts Center.

“It’s honestly kind of disappointing [the orchestra trip is] getting canceled because the orchestra’s been working really hard,” horn player Kai-Ming Ang said. “We had a lot of guests and pieces, but I think it’s really important we think about safety first.”

The spring musical, “Damn, Yankees,” which was originally scheduled to show from March 26 to 28, will also be postponed to a later date. Harker Production Manager Brian Larsen and Director of Performing Arts Laura Lang-Ree held an all-cast meeting after school today to briefly discuss what protocol the cast will be following.

“We weren’t told much, just to be very health conscious because the thing with the musical is that our cast is pretty large and we spend a lot of time together,” said sophomore Callie Mayer, who will be playing a reporter named Lynch in the show. “So obviously we can’t have rehearsals, but we need to keep each other in check and just try to practice social distancing so that we can stay healthy and on top of this whole health situation.”

Although it remains unclear whether Spirit Week, scheduled for the week after spring break, will continue, alternative options continue to be explored.

“The most important thing is everybody’s health and safety. When we do come back, we’ll figure out whether we have a spirit week, or we make it smaller and not [hold] such large events,” upper school Student Activities Coordinator Kerry Enzensperger said. “But no matter what, we’ll do something fun. The whole point of spirit is bringing the community together and having fun.”

An announcement was made to students at the upper school around 2:50 p.m. today telling students that the campus would close after the last class of the day and that all after-school activities were cancelled or postponed. Students were advised to take necessary school materials with them as they left today.

Faculty received an email at 2:42 p.m. informing them of the closure, and a separate email was sent to families at 2:53 p.m.

On Monday, upper school teachers met to discuss plans for remote learning, setting up alternative teaching options via Zoom, Remind and other online platforms. Teachers have been testing various options in classes throughout the week, and classes will operate based on each teacher’s preferred method.

Some other schools in the area that have canceled in-person classes and shifted to remote learning include Saint Francis High School, Presentation High School and Castilleja School. Colleges and universities across the country have also taken precautionary measures by transitioning to online classes, asking students to move off-campus and canceling classes.

At the upper school, Engelhardt reported 99 students absent for classes today, a spike from usual numbers. About 50 students cited COVID-19 concerns as the specific reason for their absences, which were excused.

“I’ve noticed that students are absent because they are sick more often,” Engelhardt said. “I’ve also noticed that as the coronavirus situation has been developing, parents have been more apprehensive about seeing their students to school. As such, the number of students who are calling to say that they are not coming because of coronavirus concerns has increased steadily.”

Student council is also helping administrators with facilitating this transition to remote learning. In a meeting with the Dean of Students today, ASB officers brainstormed ideas for fostering an environment promoting solidarity and student wellness.

“Take a deep breath. Get some rest over the weekend. This is new to all of us, but I’m confident that we’ll figure it out,” ASB President Avi Gulati said. “At the end of the day, we’re all here at Harker to foster our love of learning. Whether we’re in the classroom or whether we’re outside the classroom, as long as we continue to cherish what we learn, then everything is going to be just fine.”