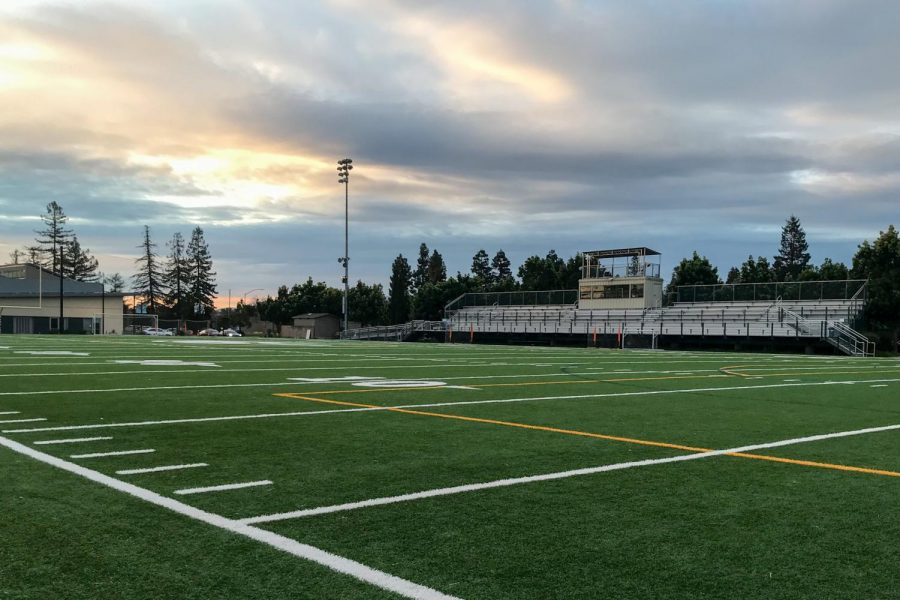 An empty Davis Field, home to Eagles' athletics. “As long as school is in session and we feel everything’s in place, we’re business as usual until we’re told otherwise,” upper school athletic director Dan Molin said. “We’re anticipating [game cancellations], and we’ll cross that bridge when we get there with each individual game.”

This article was last updated on March 12 at 3 p.m. As more information is released about sports teams affected by the spread of coronavirus, this article will be updated with the latest news. Check Harker Aquila for continuous coverage.

As COVID-19 continues its worldwide offensive, the NBA has suspended its season as athletic organizations both at Harker and in the professional world ramp up precautionary measures.

At Harker, the athletic department continues to monitor the situation, as the virus expands to 938 confirmed cases in the U.S. and over 118,000 cases globally, following the schoolwide protocol for dealing with the outbreak. As local school closures begin impacting Harker teams, the coaching staff will look to reschedule canceled games, but no finalized plan has been established yet.

“As long as school is in session and we feel everything’s in place, we’re business as usual until we’re told otherwise,” upper school athletic director Dan Molin said. “We’re anticipating [game cancellations], and we’ll cross that bridge when we get there with each individual game.”

The girls lacrosse game against Woodside Priory on March 19 was called off after the Archdiocese of San Francisco, which oversees Catholic schools in San Mateo, San Francisco and Marin counties, announced that they will be closed until March 25.

The golf team was also barred from participating in the Champions Invitational, held annually in Palm Springs.

“As a team, we’re a little bit frustrated just because we were really starting to pick up momentum as the season started and we were really putting in some great effort in the practices. [That tournament] is also always a great chance to do some team bonding before the playoffs,” varsity golf co-captain Bryan Zhang said. “But we definitely understand the administration’s situation and how this could be a big issue.”

Meanwhile, the athletic department is reaching out to all spring sports teams to ensure that teams are maintaining safety protocols and limiting unnecessary contact as much as possible during practices.

“Mr. Olson, our athletic trainer, sent [a note] out to all the spring coaches, reminding everybody of cleanliness and hand-sanitizing and no high-fives,” Molin said. “We went sport-by-sport, really looking at every single sport and where the touchpoints were.”

Locally, several high school teams competing in the CIF winter playoffs were also affected by the spread of the virus, and as a result, had to withdraw from tournaments.

Archbishop Riordan’s boys basketball team, seeded first in the Division I CIF playoffs, was forced to end their season after a student at the school tested positive for COVID-19.

On the professional level, the NBA announced yesterday that games would be suspended following matchups on Wednesday night, with Utah Jazz center Rudy Gobert testing positive for the virus.

Jazz guard Donovan Mitchell also tested positive today. According to ESPN NBA reporter Adrian Wojnarowski, Gobert was reportedly careless in the locker room, touching teammates’ belongings. He released a statement via Instagram earlier today apologizing for his behavior and encouraging others not to take the spread of the coronavirus lightly.

In the collegiate world, the NCAA canceled the men’s and women’s basketball tournaments, commonly known as March Madness today, as major conferences including the ACC, Pac-12 and SEC also halted competition.

The NHL has also suspended their season indefinitely, while the MLB has canceled the remainder of spring training and pushed back the start of the regular season — scheduled for March 26 — by at least two weeks.

The ATP tennis tour also postponed all play for six weeks today, following the cancelation of the BNP Paribas Open, held in Indian Wells, California — called the “fifth Grand Slam” of the tennis world — on Sunday.