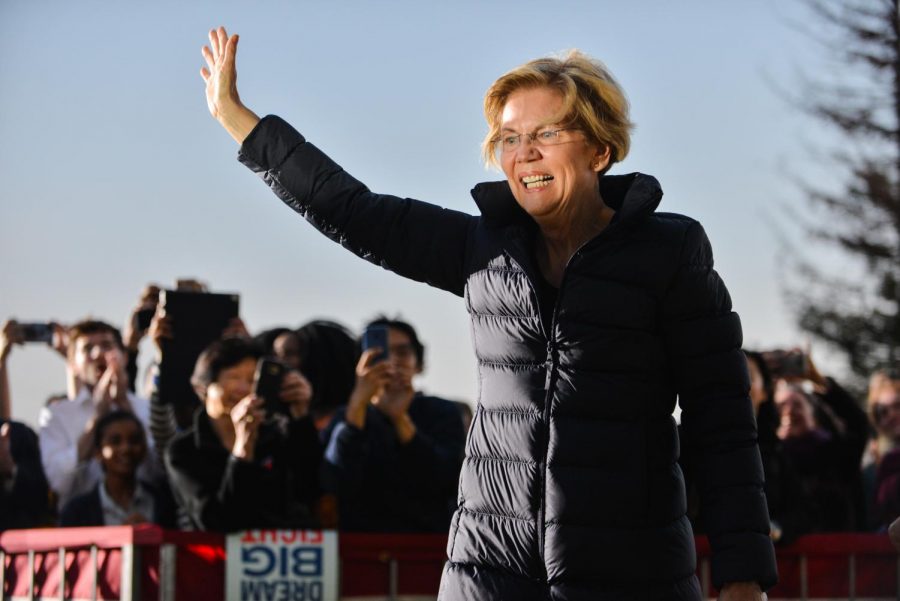 Sen. Elizabeth Warren waves to the crowd at (D.-M.A.) at her first campaign rally in Oakland on May 31. Warren, who was one of the previous front runners of the Democratic primary race, dropped out today after falling short of expectations on Super Tuesday.

On Super Tuesday, Warren’s campaign was not able to meet its expectations and came in third with a total of 64 delegates, 487 fewer than Senator Bernie Sanders (D.-V.T). She has not yet declared an endorsement for either Sanders or Biden.

Warren promoted the fighting corruption in Congress, a series of measures whose goal was to transfer away power from the wealthy and improve regulations on elected officials to hold them accountable for their actions, fighting student debt and climate change reforms through the Green New Deal. She focused on limiting upper class privilege, criticizing massive companies and corporate lobbyists for their political influence.

For Maya Kumar (‘18), who canvassed for Warren’s campaign by knocking on doors around Nashville, climate change policies were a large part of the reason she initially decided to volunteer.

“I feel like she’s the person with the most comprehensive and achievable plan to fight climate change, and I also think she has a well rounded focus and that she’s talking about issues of environmental justice and racial inequality and how we address [them],” Kumar said. “As the impeachment started going on, I felt that her really strong anti-corruption policies and ideologies were really important for the country as a whole.”

Warren’s campaign was funded by grassroots donations without holding events for wealthy donors, raising $112 million from over 1,250,000 funders and displaying the possibilities for a first-time candidate. With the color “liberty green” representing her team, Warren appeared on bumper stickers and T-shirts declaring “running for president, that’s what girls do,” referring to her tradition of pinky promises with young girls she meets.

“Whether or not [the campaign suspension] is explicit misogyny, it’s definitely a result of that,” Kumar said. “I talked to so many voters going door to door who genuinely liked Elizabeth Warren, they just for some reason were like ‘Yeah, I like her, but I’m voting for Biden; oh, I like Bernie better.’ It feels like a woman has to work twice as hard and be twice as accomplished to get just as far as a man.”

In a message to her staff today, Warren thanked her supporters for their work over the past year. She encouraged them to continue calling to cancel student debts, reduce racial wealth gaps, expand Social Security, expose government corruption and many more, stating that the goals of the campaign remain regardless of her position in the elections.

“This fight–our-fight–is not over,” she announced. “And our place in the fight has not ended.”