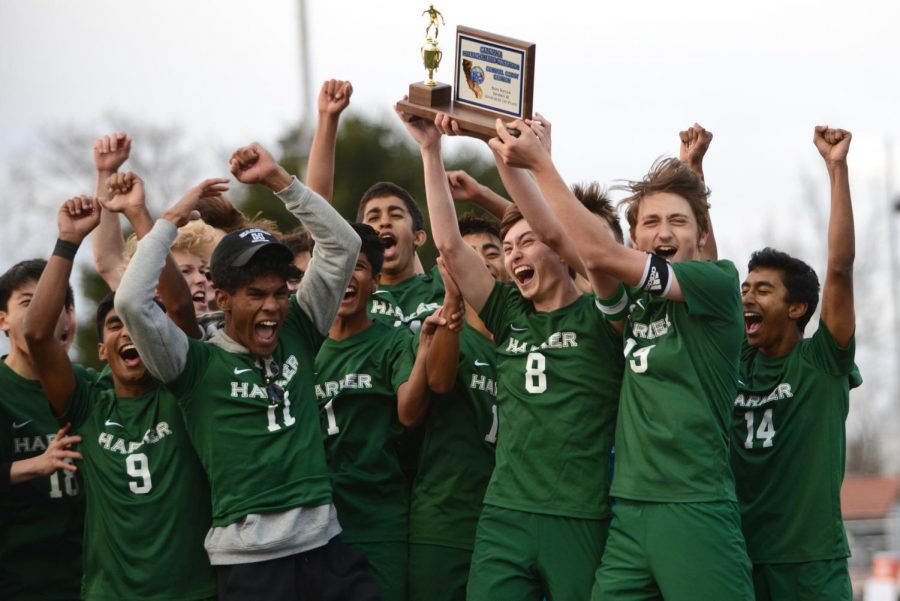 The varsity boys soccer team celebrates after clinching their first CCS championship in school history after a win in penalty kicks against St. Francis on Saturday. “The fact that four years ago we’d only been to CCS once. Then we start going to CCS, we start making it further and further. And now we’re the CCS champions, that’s insane,” goalie Laszlo Bollyky (10) said.

“In the last game, we had many chances at goals but were unable to convert them. In general, we need to be cleaner and eliminate careless errors,” Muthu Panchanatham, a sophomore on the team said. “If we stick to our game plan and continue playing the way we’ve played all season, we should be able to continue our winning streak.”

The boys defeated the Galt Warriors in their NorCals quarterfinals match 5-4 in penalty kicks on Tuesday to earn a berth in the semifinals. The Eagles took an early lead following a goal from co-captain Andrew Cheplyansky (12), but in the final minutes of regulation, Galt scored off a free kick to tie the game up at 1-1. After both teams went scoreless in overtime, the game went on to penalty kicks for the third time in the boys’ last three games.

Andrew and sophomores Ishaan Mantripragada, Arthur Kajiyama, and Justin Fung converted their penalty kicks for the Eagles, while the Warriors punched in four of their five opportunities as well. On the sixth penalty kick, Galt failed to score while Jeffrey Fung (12) converted, sending the Eagles to the NorCal semifinals.

Just three days before, the boys were crowned CCS champions as they took down St. Francis High School on Saturday. The boys were down 1-0 in the second half of overtime, with just a few minutes left to play, as Justin found the back of the net to send the game to penalty kicks, where the boys won 3-1 as goalie Laszlo Bollyky came up clutch with 2 crucial saves.

This has been a historic season for the Eagles, who had previously not advanced past the CCS semifinals for boys soccer. With a win, the team would take on the winner of the matchup between second-seed East Union and third-seed Branham on Saturday.