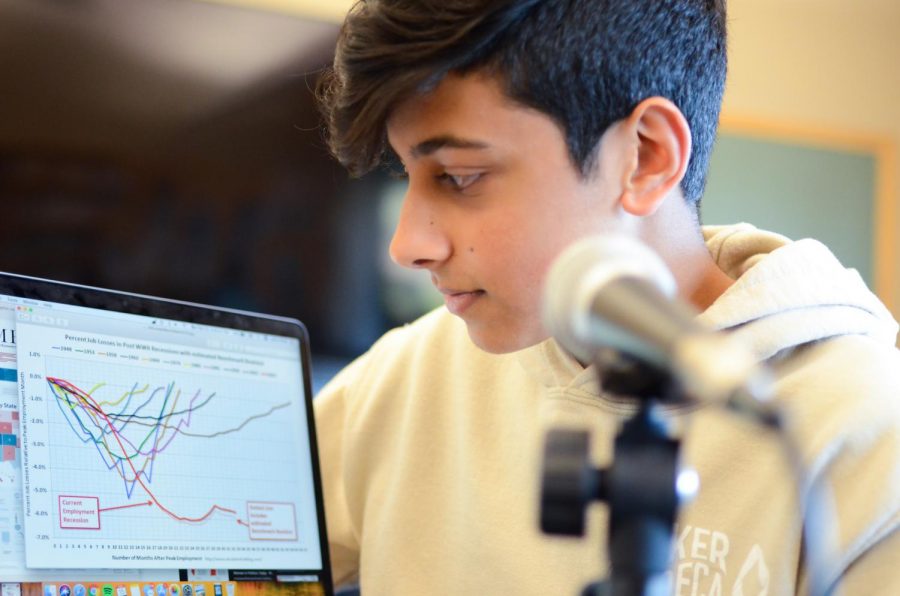 “[Game theory] showed me how there’s so many consequences of doing some action. For example, moral hazard and the concept of people offloading their risk. It’s so interesting to me how all these different people can be interconnected in their decisions. And I just think it’s allowed me to think about my decisions better,” Vishnu Jaisim (12) said.

by Athreya Daniel and Saahil Thoppay

At the lunch tables outside Manzanita Hall, Vishnu Jaisim (12) grabs his polished fork and waves it side-to-side in the air, hands moving energetically and animatedly as he crisply and clearly articulates his opinion. He pauses, allowing his friend to respond to his point, then slowly nods, already formulating a logical response. Counting his points off his open palms while keeping his face calm and collected, he ensures a courteous dialogue.

Vishnu’s enthusiasm for debate began in middle school and has grown ever since. Although he loves to argue, question and analyze, Vishnu debates more to teach and understand different perspectives than solely to argue the topic.

“My goal is … to make an agreement based on a topic, and that’s my thing which is sort of like teaching. Debating is sort of that inner teaching coming out,” Vishnu said.

One reason debating is naturally enjoyable to Vishnu is because of his open mindset. Vishnu credits his parents for his way of thinking, as it has grown into an essential part of his character.

“[My parents] really stressed to me that it is important to take all people’s views into account. It’s that sort of thing where they listen to me, and they appreciate what I have to say, and I appreciate them listening,” Vishnu said.

Outside of debate, Vishnu has many passions and hobbies that he actively participates in. He is especially dedicated to discussing world economic policies and understanding the analytics of business.

Vishnu founded the business analysis club at Harker and his own economics podcast called Real Economics at Harker to discuss policies without having to follow a particular argument structure and stick to one set of topics. The podcast further allows him to understand points of view that could be radically different than his.

Vishnu came up with the idea for the podcast during a trip to Chicago after realizing how much fun he had during a discussion about economic policies over a chess match with his friends.

“I was like this is really what I should do … After that, I came back and pulled together some of my friends and said let’s start a[n] [economics] podcast,” Vishnu said.

Although abstract discussions are something he enjoys, Vishnu wanted to find a practical outlet for his business and policy skills. For Vishnu, game theory presented the perfect opportunity, as it allowed him to use his discussion skills to solve real-world issues.

“He brings up things from game theory in game theory, and you can tell how much passion he has for economics [and game theory],” said friend Elaine Zhai (11).

Game theory has opened Vishnu’s eyes to the world, especially in showing him the interconnectedness of his decisions.

“[Game theory] showed me how there’s so many consequences of doing some action. For example, moral hazard and the concept of people offloading their risk,” Vishnu said. “It’s so interesting to me how all these different people can be interconnected in their decisions. And I just think it’s allowed me to think about my decisions better.”

While Vishnu loves to debate and learn about business and policy, he enjoys letting loose by pursuing his passion for tennis. Tennis resonates with Vishnu, as it provides him with both individual and team aspects. Vishnu finds tennis to be a great way to communicate and build relationships with his peers while playing the game he loves.

“Tennis is a big part of my life,” Vishnu said. “That’s how I cultivated my love for teaching [economics] … I just really wanted to teach everything because I saw how interesting and fun it could be.”

Vishnu’s friends and peers enjoy discussing topics with him and admire the trust, reliability and fun that he brings to their friendship.

“I like friends who I can always trust, who are reliable friends, and [Vishnu] definitely fits that description,” friend Nakul Bajaj (12) said. “For him and I, a big topic is speaking about political issues. Among those topics, I like the stuff we talk about because he is able to explain his perspective very well and be upfront about it, and I think that is very mutually beneficial.”

Upper school mathematics department chair Anthony Silk shares a similar view about Vishnu’s personality and contribution to his class, both in terms of his academics and interactions with his peers.

“He’s always happy. He is cheerful, he is fun and funny and just has a great attitude all the time. You know he is easy going, he is interested, he is enthusiastic and he loves just delving into stuff,” Silk said.