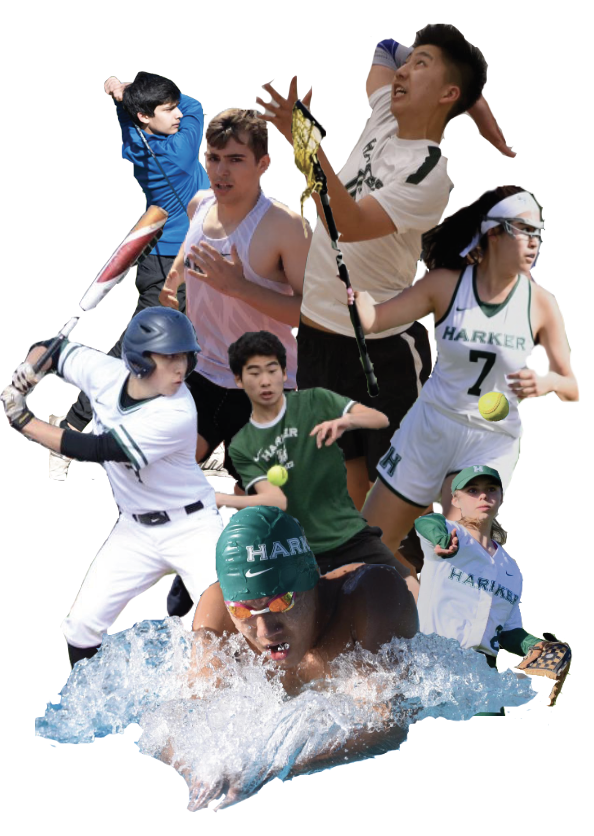 by Aditya Singhvi and Lauren Liu

“We’re all practicing really hard individually. We all want to do really well coming into the first few weeks of tryouts,” Bryan said. “We have some crucial matches in the first few weeks, so we want to succeed in those matches.”

Last season, the team finished sixth at the CCS championships. Fielding a team of 11 golfers, the boys will look to defeat league rivals Menlo once again for the league championship.
Girls Lacrosse
The varsity girls lacrosse team, coached by new head coach Tarin Tobin, is preparing for their first matchup of the season against Willow Glen on Feb. 25. Seniors on the team this year include Simren Gupta, Lila Gorman, Naviya Kapadia and Nellie Tonev.

“I’m really excited to get to know everyone and bond with my team. After not playing lacrosse last year, it’s nice to ease back into it because it’s fun and gives you a rush of adrenaline and allows you to get everything off your mind,” player Michelle Jin (9) said.
Baseball
The boys baseball team began their season with preseason practices beginning in January, varying from hitting drills to calling exercises. The captains of this year’s team are Max Lee (12), Nick Coulter (11) and Levi Sutton (11), under head coach Mike Delfino.

“It’s nice being with a team where everyone supports each other,” Aaron Lo (10), a varsity baseball player, said.

Softball
Under the guidance of head coach Raul Rios and captain Natasha Yen (11), the girls softball team is looking to notch another successful season, beginning with a March 3 matchup against Gunn.

“I’m excited to play at the high school level and to play with my friends. I’m the only pitcher this year so I’ll be getting a lot of time to play which is nice,” Katelyn Abellera (9), the pitcher for this year’s team, said.
Swimming
The swim team will consist of 29 swimmers this season, including several water polo players and club swimmers.

“We would love to win CCS.” varsity head coach Tania Chadwick said. “This year is probably the most club swimmers that I’ve seen, and I think that the numbers that they bring will be amazing for our team.”

The Eagles capped last season by placing fourth at the CIF State Meet, with Ethan Hu (12), who committed to swim for Stanford earlier this year, breaking state records in the 200 Individual Medley (IM) and the 100 Butterfly.

“Every year we’ve gotten better since I’ve been here, so I’m really confident and feeling good for the team and we’re going to have a good season,” Chadwick said.
Boys Tennis
For the boys tennis team, this season will be aimed at finally securing the WBAL league championship this season, after their only losses last season came to league champions Menlo.

“I think this year, we’re looking like we’re in shape to pose a challenge to Menlo for the first time in 30 years,” varsity boys tennis captain Mihir Sharma said. “Right now, it looks like we’re at the strongest that we’ve been for a while.”

With head coach John Fruttero at the helm, the Eagles will field both a full junior varsity and varsity squad.

Track and Field
The track and field team, following a preseason that began in December, will be coached by Samantha Salfen, who was previously an assistant coach.

“My goal this season is for everyone to try their best — asking questions, having fun and building a team morale that includes everyone,” Salfen said.

This year, the team utilized the weight room for preseason work out sessions, building towards their first meet on Feb. 29 at Bellarmine.

“Track and field people just think it’s a lot of running and there’s actually a lot more strength that goes into it than a lot of people realize. Hopefully, working out in the weight room will be seen in the results when the season starts,” Salfen said.
Boys Volleyball
The varsity boys volleyball team, following a historic 2019 season that saw the Eagles rank fourth in the nation and lose a five-set heartbreaker in the NorCal finals, will look to replicate their successes in the 2020 season despite several key seniors graduating. The team will be coached by first-year head coach Zac Mattson as they look to notch another successful season.