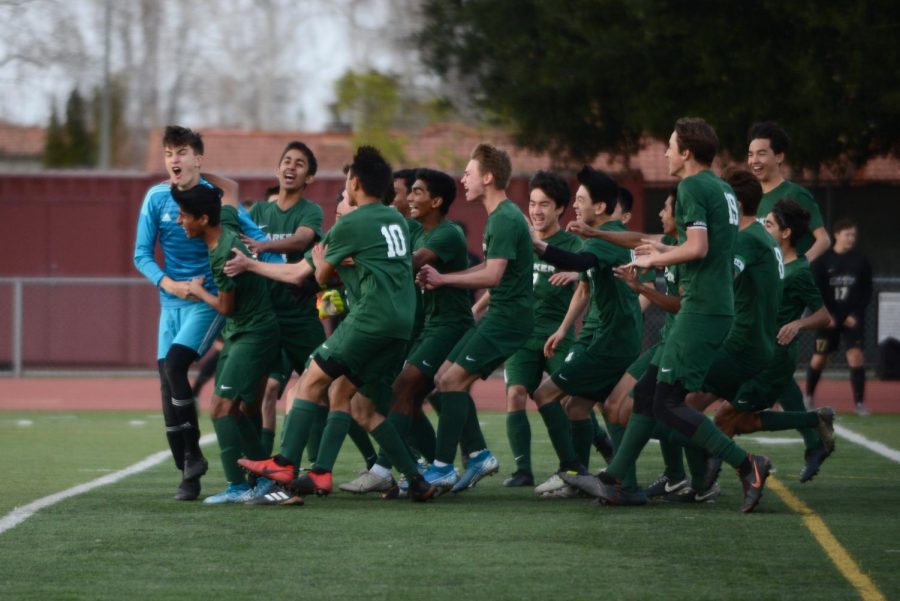 The varsity soccer team celebrates after clinching the CCS championship 3-1 in penalty kicks after ending overtime tied at 1-1. During the penalty kicks, Andrew Cheplyansky (12), Justin Fung (10) and Darshan Chahal (12) all scored, and goalie Laszlo Bollyky (10) made two close saves, securing the win for the Eagles.

The varsity boys soccer team defeated the St. Francis Lancers 3-1 in penalty kicks after ending 1-1 in double overtime in the Central Coast Section (CCS) Division III finals on Saturday, advancing to the first round of the NorCal Division III championship.

Following a back-and-forth first half, the Eagles and the Lancers entered halftime tied 0-0 in front of a large crowd gathered at Fremont High. With more strong defense from both sides and a few near-misses on offense, the two CCS finalists remained tied scoreless at the end of regulation.

Heading into overtime, St. Francis scored early, taking a 1-0 lead. In the last minute of the final overtime period, Justin Fung (10) scored to tie it up at 1-1, ensuring that the first-place matchup would be decided by penalty kicks.

During the penalty kicks, Andrew Cheplyansky (12), Justin and Darshan Chahal (12) all scored, and goalie Laszlo Bollyky (10) made two close saves, securing the win for the Eagles. This season has been a historic one for the Eagles, as they advanced past the CCS semifinals for the first time in school history.

“The fact that four years ago we’d only been to CCS once. Then we start going to CCS, we start making it further and further. And now we’re the CCS champions, that’s insane,” Laszlo said.

The varsity soccer team won the semifinal matchup against Sequoia last Wednesday with the same score, emerging victorious 3-1 in PKs after ending overtime 1-1.

“I was feeling really confident about how we played against Sequoia. It kind of moved onto the same scenario,” Laszlo said. “Our whole team just rallied towards the end. We got it together, we scored during the last minute, we went onto PKs, and we’re the winners now, we’re the champions.”

For the crowd of Harker students, parents and teachers who attended to show their support for the players during the finals, it was just as exciting to see the team come back at the end and take it all.

“I think this was a really good game to come to because they made Harker history and the whole team, they really wanted us to come support and come out,” Rhea Nanavati (11) said. “Coming out to the games, you can see that they really want to be there and that they’re putting their heart out on the field.”

The team is set to play the Galt Warriors at home today at 4 p.m. in the quarterfinals round of the NorCal Division III tournament.