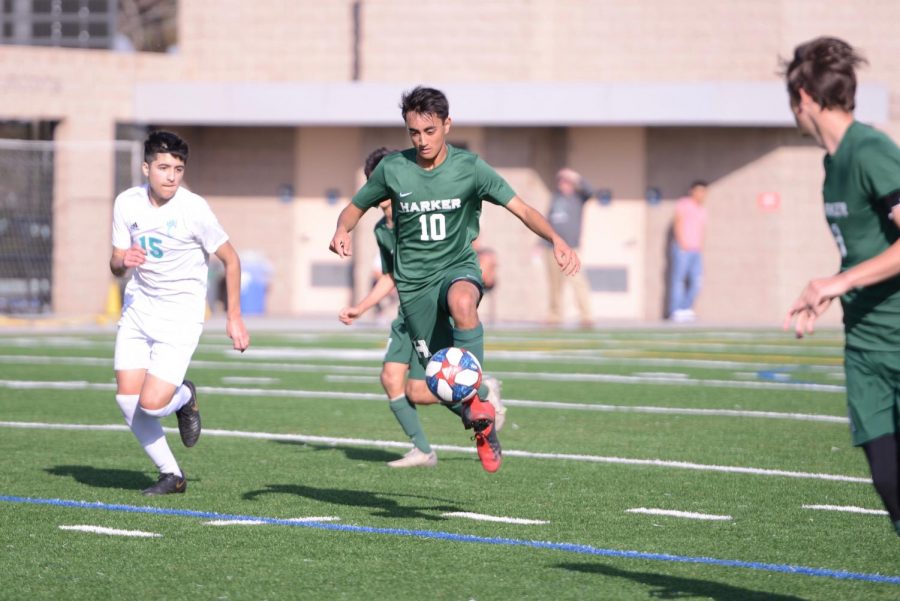 Darshan Chahal (12) controls the ball during the Eagles quarterfinal win against the Evergreen Valley Cougars last Saturday. The Eagles defeated the Cougars 1-0, fighting hard to get on the scoreboard and stay ahead after a scoreless first half.

The varsity boys soccer team defeated Sequoia High 3-1 in penalty kicks in their CCS semifinal matchup yesterday evening at Redwood City, after finishing tied at 1-1. This win marks the furthest that the boys soccer team has ever advanced in playoffs.

“I think it’s phenomenal. Before I showed up as a coach, we’ve never won or even got into the playoffs,” head coach Jeff Baicher said after their quarterfinal round win. “Now this is three years straight and the second year in a row we got to the second round, so it seems like we’re building something.”

Following a successful league season that saw them attain an 8-2-2 record, the team qualified for the Division III CCS playoffs after narrowly missing out on the league title to Sacred Heart Prep and Menlo. The Eagles defeated the Evergreen Valley Cougars 1-0 in a home matchup last Saturday in their quarterfinal round, where they fought hard to get on the scoreboard and stay ahead after a scoreless first half.

“Once I scored, I was so excited, so happy,” said Ishaan Mantripragada (10), who made the Eagles’ only goal. “We came into the second half knowing that we had to come out stronger and want it more than the other team — so that’s what we did.”

In the close game yesterday against Sequoia, which ended in a 1-1 tie after a goal by Andrew Cheplyanksy (12) off an assist from Muthu Panchanatham (10), the victor of the matchup was determined by penalty kicks. Andrew, Justin Fung (10) and Darshan Chahal (12) all scored, and two close saves by goalie Laszlo Bollyky (10) secured the win for the Eagles.

“[It was] probably one of our toughest games, mostly because of how much work our players put in. A lot of people were cramping at the end, putting in all that they had,” center midfield Marcos Acero (11) said. “We get a lot of hype from the seniors, because each year, the seniors know it could be their last game. And that encourages not only them, but also all of us to put all of our effort in.”

The boys will play St. Francis in the CCS finals game at 3 p.m. this Saturday at Fremont High School.