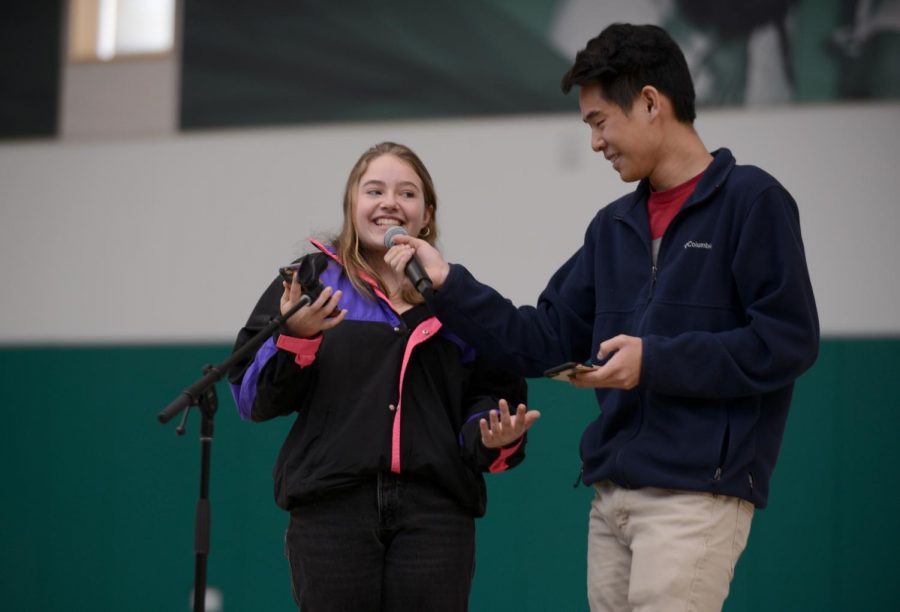 Student council members Calais Poirson (11) and Bennett Liu (12) perform a skit on how to make sandwiches at the sandwich bar at school meeting yesterday. The sandwich bar gives students the opportunity to craft their own soy butter and jelly sandwiches after school.

Avi Gulati (12) started off the school meeting by announcing a high of 66 degrees and a low of 52 degrees Fahrenheit.

Head of upper school Butch Keller thanked students and faculty for the successful Challenge Day that took place on Feb. 6.

“I heard from a lot of people that participated that it was a great event,” Keller said. “I’ve also received many, many emails from others asking if we were going to do [Challenge Day] again.”

Keller also announced that, starting yesterday, biscuits will be served after every school meeting. There will be three kinds: honey butter biscuits, Eagle biscuits and egg and cheese biscuits.

Calais Poirson (11) and Bennett Liu (12) from the food committee went over the basics of how to make a sandwich at the soy butter and jelly sandwich station available after school in Manzanita and reminded students to not make a mess.

“Make a sandwich, not a fool out of yourself,” Bennett said.

“Community service isn’t just helping out your community, but it’s finding where you fit in the community and finding that spot where you really belong [and] can strive to be your best outside the classroom,” Alex said.

Meona Khetrapal (11), Arjun Virmani (11) and Rohan Varma (11) announced that the boys soccer team qualified for CCS and the girls soccer team is league champions this year. Boys soccer traveled to King’s Academy yesterday. The boys soccer team’s record is at 12-3-3 right now. Spring sports competitions begin next week. Arjun and Rohan also announced that all students are invited to a community ice skating event this Friday at 7:30 p.m. at Solar4America, an ice rink in San Jose. Admission is 12 dollars and 50 cents and renting a pair of skates costs five dollars.

From Green Team, Anthony Shing (12) and Sachi Bajaj (11) announced a speaker event during long lunch yesterday, when environmental educator Keshet Miller came to speak in the Nichols auditorium at 12:45 p.m. They also announced the results of the sustainability challenge that took place a few weeks ago: Zoe Kister (11) won the raffle, sophomores placed fourth, freshmen placed third, juniors placed second and seniors placed first. They encouraged students to continue practicing sustainable actions even though the sustainability challenge is over.

Upper school English teacher Charles Shuttleworth reminded students that the Shakespeare monologue competition is this Friday during long lunch at 12:45 p.m. in Nichols auditorium. There will be prizes for first, second and third place.

Andrew Sun (11) and Bryan Zhang (11) announced a Nanoseed benefit concert on March 13 at 7 p.m. in the Rothschild Performing Arts Center. Tickets can be bought at tiny.cc/nsconcert. All proceeds will go toward providing grants and scholarships to students, farmers and entrepreneurs in rural China.

From FEM club, Julia Biswas (11) announced that FEM club hosted the second forum in its discussion series at 12:50 p.m. during long lunch yesterday. The talk was on international feminism.

The Ethics in Tech Forum club announced an Ethics in Technology Conference on March 6 from 3:30 p.m. to 5 p.m. in the Nichols auditorium. They also announced a speaker event at 12:45 p.m. during long lunch yesterday.

AI club’s club week is this week, and they will be selling ice cream and other treats this week. They will also have an introduction to AI workshop on this Friday starting at 1:25 p.m. in Nichols room 302.

Philosophy club announced its annual essay competition. This year’s prompt is “Are states ever justified in using violence against non-violent citizens?” Submissions can be emailed to [email protected].

Programming club announced its annual programming competition, the Harker Programming Invitational, on March 7, open to students from all around the Bay Area. There will also be a speaking event on that day with a panel of four industry professionals and a keynote speaker. The link to register for the invitational is tiny.cc/HIP2020.

From the campus development committee, Aaditya Gulati (10) and Rupert Chen (9) announced that the four square court is open for anyone to play, with bouncy balls available in the Dobbins office. There will also be gel air fresheners in bathrooms on campus, including the bathrooms in downstairs Nichols, downstairs Dobbins and Manzanita.

David Feng (12) dismissed the senior class first, then he dismissed everyone else.