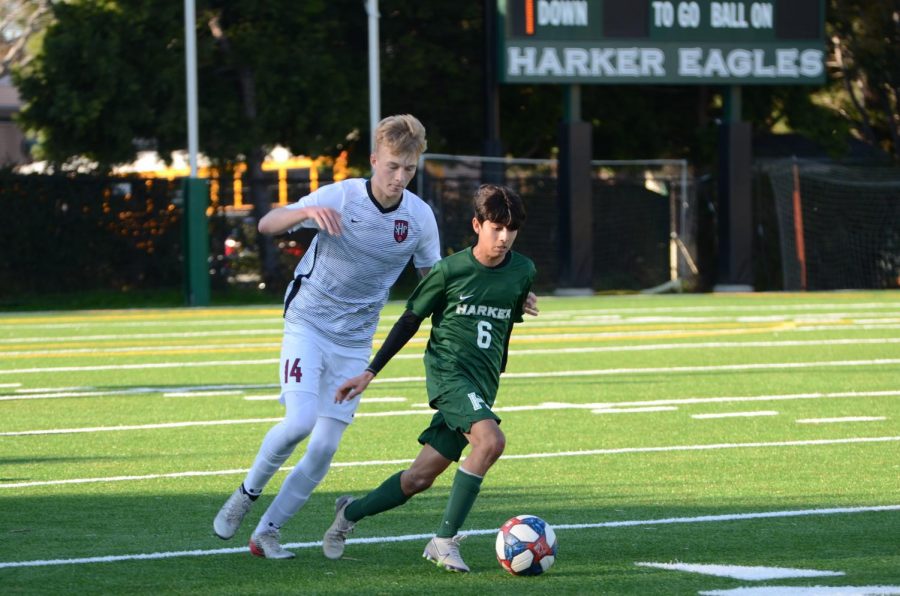 Arthur Kajiyama (10) maintains possession of the ball against a Sacred Heart defender in their game earlier this season.

As winter sports league play comes to an end, Harker basketball and soccer teams turn towards the upcoming playoffs. Having started their seasons in late October, the Central Coast Section (CCS) playoffs are a culmination of the hard work and determination of the teams.
Girls Soccer
The varsity girls soccer team finished first in its league, with a dominant record of 10-1-1. The girls were defeated 3-0 on Wednesday by Mercy Burlingame in the WBAL playoff game — a hard-fought battle for the last guaranteed CCS playoff spot. Despite the tough loss, the girls overall enjoyed a successful season, securing their first league title since 2014.

Boys Soccer
Varsity boys soccer is seeded third in Division 3 after achieving an overall record of 13-3-3. The team hosts Evergreen Valley on Saturday at 3 p.m. in their third straight CCS appearance. If the boys win on Saturday, they will advance to the semifinals match next Wednesday. The bracket can be found here.

Girls Basketball
Harker varsity girls basketball will also be playing on Saturday, traveling to Carmel in the evening. A win against Carmel will allow the girls to progress to the quarterfinals of the Division 4 playoff bracket. With an overall record of 11-13, the girls seeded ninth and now hope to claim an upset against the eight seeded Carmel team playing away tomorrow at 7 p.m. in the Division IV bracket.

Boys Basketball
Finally, boys varsity basketball qualified to the Divison IV bracket of CCS, playing in a first-round game on Friday at 4 p.m. against Design Tech at home. The boys finished their season 7-17 and expect a close match against the wild card contenders. With a win Friday, the team will face eighth seed Scotts Valley on Saturday, playing away at 7 p.m.