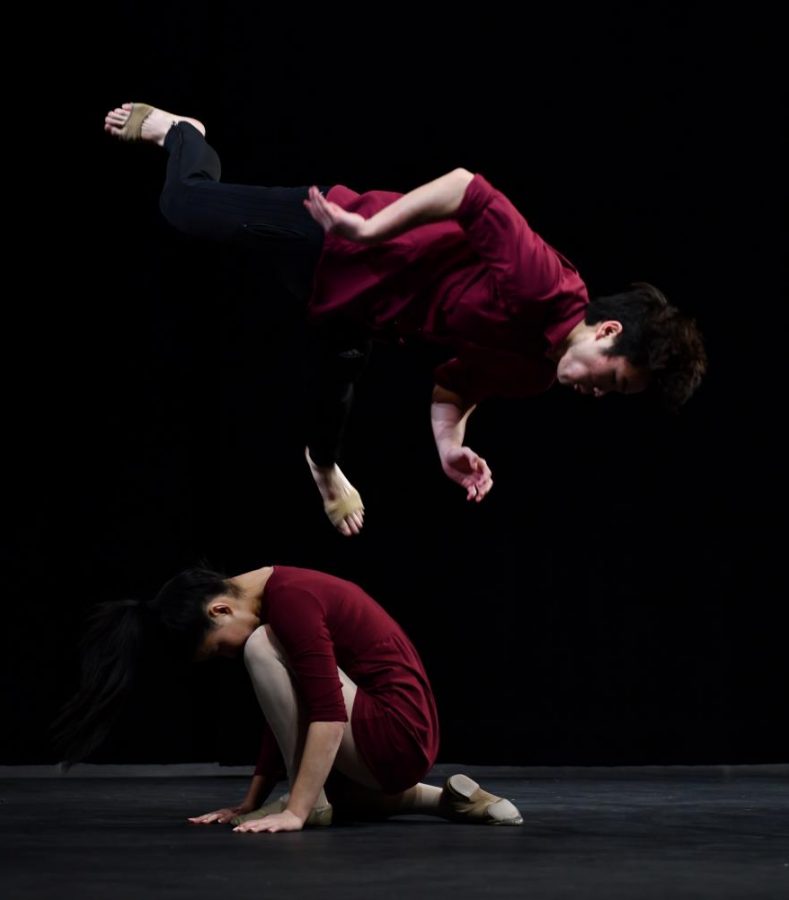 Vance Hirota (12) jumps over Chloe Chen (12) as a part of their contemporary dance to "Work Song" by Hozier. More than 50 students in total performed in Hoscars, the upper school annual talent show, held on Feb. 7 in the Rothschild Performing Arts Center.

by Sally Zhu and Brian Chen

More than 50 students performed in Hoscars, the upper school’s annual talent show, showcasing the musical and artistic skills of the students, on Feb. 7 during a special schedule.

Themed “Summer Olympics 2020,” the show is being held for the third year in the Rothschild Performing Arts Center. Eric Kallbrier, the director of student organizations, enjoys seeing the hidden talents that students have.

“My favorite part about Hoscars is seeing students perform that I may not have known had the talent they are expressing. It’s super exciting to see them thrive in their element and everybody else getting excited about it,” Kallbrier said.

Thirteen groups performed, with acts ranging from classical singing and instrumental accompaniment to a dance by Bollywood Club and AP Art History’s tableau.

“Since it’s student-led, all the planning, like deciding who gets to perform and what the theme is, just brings together so many ideas and so many talents,” senior class president Roma Gandhi (12), who helped plan Hoscars, said. “It’s a great way for people to see what their peers are doing, both inside and outside of school.”

This year’s emcees were juniors Alex Kumar and Sarah Raymond, and the chief officers who planned Hoscars were Roma and ASB president Avi Gulati (12).

Unlike in previous years, there was no real judging or scoring at this year’s Hoscars.

“Student council has decided to remove the judging factor from this show to foster a less competitive community,” Sarah said during her and Alex’s introduction.

The first act was a band performance by a group of seven seniors, with Brendan Wong on the piano, Grant Miner on saxophone, Joshua Valluru and William Rainow on electric guitar, Thomas Rainow on bass, Maya Shukla on the drums and Kaidi Dai providing vocals.

Following their act, Anika Fuloria (11) sang and played the piano to a pop song mashup. Next, eleven members of the Bollywood Club danced to a medley of Indian pop songs.

After a brief humorous exchange between Alex and Sarah, Ayan Nath (10) sang and danced to “Uptown Funk” by Mark Ronson and Bruno Mars, encouraging the audience to sing along throughout his performance. Karan Bhasin (11) then played a piano pop song medley, featuring “Lucid Dreams” by Juice WRLD and “Someone You Loved” by Lewis Capaldi. Following Karan’s medley was Kismet Singh (12) singing with her guitar a rendition of “Hotel California” by the Eagles.

“The fact that everybody comes and watches you, even though it’s required [to attend], intensifies the performers to push themselves to another level,” Ayan said.

Alex and Sarah came onto the stage and scored the acts, both giving them all a score of 10. They then announced the upcoming three acts, starting with AP Art History’s tableau, a long-standing tradition. Narrated by senior Nina Gee and Avi, the scene depicted the painting “Liberty Leading the People” by 19th-century artist Eugène Delacroix.

After another interlude by the emcees, Smriti Vaidyanathan (12) sang, with the piano, to “The Next Best American Record” by Lana del Rey. Then, an acapella group performed “Dancing Queen” by Abba. The next act was an instrumental piece by seniors Kathy Fang on the Chinese guzheng, Max Lee on the piano and Katelyn Chen providing vocals to the song “City of Stars” from the 2016 movie “La La Land”. Finally, Vance Hirota (12) and Chloe Chen (12) danced a contemporary piece to “Work Song” by Hozier.

To close off the show, all the performers returned to the stage, act by act, along with the emcees and Avi and Roma, dancing and waving to the audience.