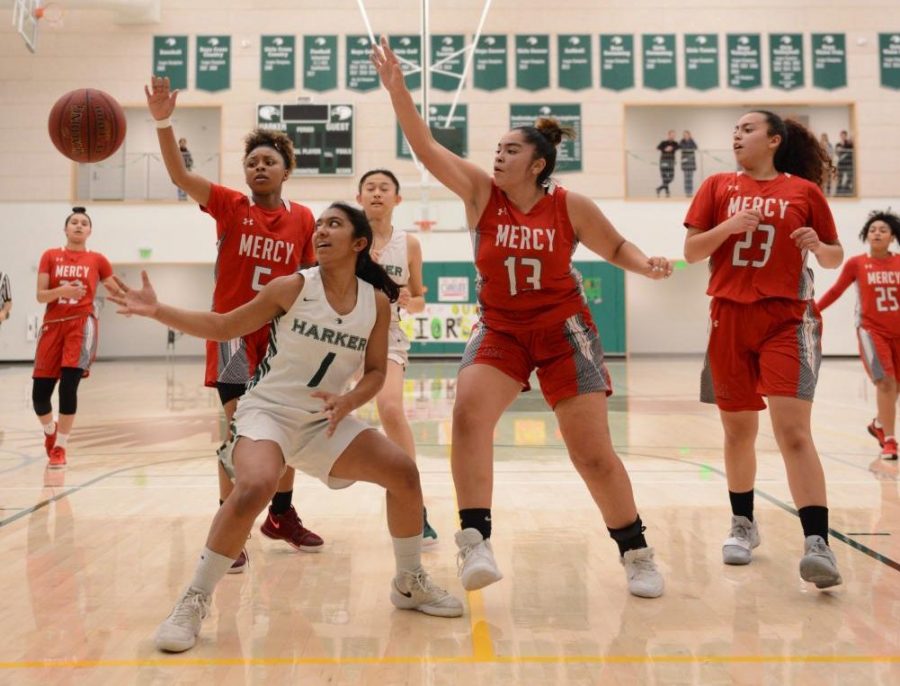 Co-captain Maria Vazhaeparambil (11), surrounded by three Mercy defenders, reaches for a loose ball during the first quarter of the Eagles' matchup last Friday. The girls started off evenly, tied 27-27 heading into the locker room at halftime.

The varsity girls basketball team fell 69-53 to the Mercy San Francisco Skippers in a senior night matchup last Friday, bringing their overall record to 11-11 and league record to 6-4.

Ahead of the game, five seniors — Allison Yen, Sara Lynn Sullivan, Haley Arena, Kaidi Dai and Charlotte Blanc — were honored in a brief ceremony, presented with flowers by their teammates in front of a loud home crowd.

“I’ve known these people for a really long time. It’s great seeing them in their last home game, knowing they care so much about the sport,” Rakesh Nori (12) said. “As seniors, it’s one of our last chances as a class to be together in this event. It’s pretty nostalgic already.”

The Eagles had already defeated the Skippers once this season — winning 62-49 in an away game on Jan. 14 — and were looking to replicate the feat on the seniors’ special night.

“It was so nice. It’s just another reminder to be thankful for everything I have and how wonderful my friends are. It was just a really overwhelmingly happy night and I’m really glad it went so well,” Kaidi Dai (12) said.

Playing in an athletic center decorated with elaborate posters, streamers and balloons, the game began fairly evenly, with the two teams tied 27-27 heading into the locker room at the half.

The third quarter remained relatively close, with Harker lagging only 43-39 heading into the fourth. However, Mercy crushed the Eagles’ hopes of a late comeback, outscoring the home team 26-14 in the final period to seal the 69-53 loss for the Eagles.

“It was tough. Mercy SF has always been a very formidable opponent for our team,” Kaidi said. “I think everyone played really hard, I think everyone gave it their all. We were in double bonus by the end of the game, which means we were all fouling, we were all working…In the end it was a loss, but in many ways, it was also a win.”