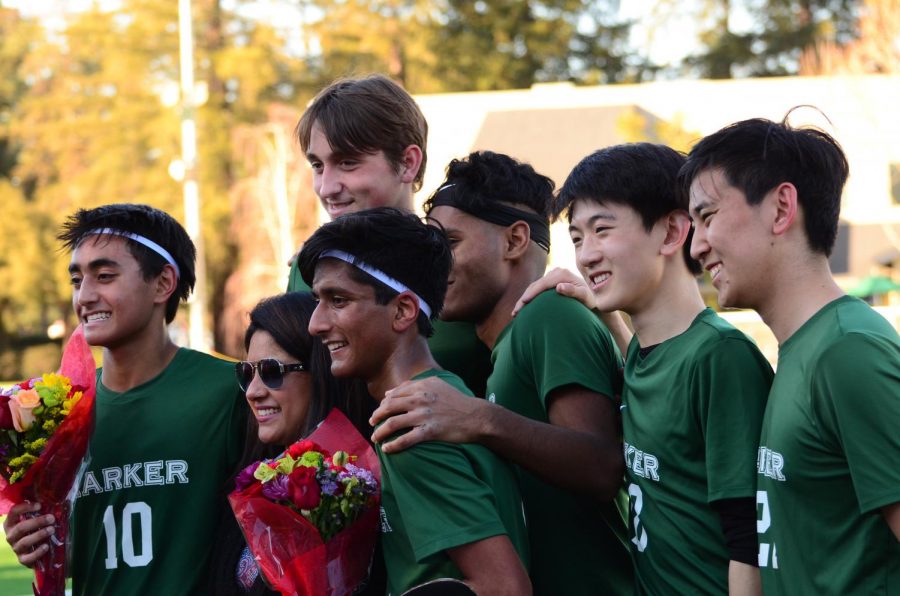 Seniors on the varsity boys soccer team pose for a picture during the halftime ceremony. The Eagles won the matchup last Friday against Eastside 11-1.

The varsity boys soccer team had a blowout 11-1 victory against Eastside College Prep on senior night last Friday, bringing their overall record to 12-3-2.

The Eagles had no trouble scoring, controlling the ball for most of the game and earning multiple goals before halftime. They relentlessly attacked an Eastside team that was unprepared for their explosive offense, while playing solid defense. Nine Eagles scored, with Shomrik Mondal (12) and Muthu Panchanatham (10) almost hitting the coveted hat-trick with two goals each.

During halftime, seven seniors were honored: Anthony Xu, Asmit Kumar, Brandon Lin, Darshan Chahal, Shomrik and co-captains Andrew Cheplyansky and Jeffrey Fung. Head coach Jeff Baicher started off with a short speech honoring all the Eagles, especially the seniors, for their work throughout the season. The seniors then received flowers from the other members of the team and took pictures with their friends and family.

Members of the Harker community were very supportive of the soccer team, with many juniors and seniors creating signs for players and coming out to watch the game. For Jeffrey, senior night was especially impactful, allowing him to look back at his journey since he was a freshman on varsity.

“When I was a freshman, Jared Anderson, who was a senior last year, said that in what was 2 years for him the only 2 people left will be us. That’s just me this year – the only freshman who has played on varsity all 4 years. So, it was a little bit sad, to play our last home game,” Jeffrey said.

“The seniors are a really important part of the team on the field – they are some of our best players, the two team captains. They are really important since I am a younger kid. They tell me how I can improve, and they show me what kind of attitude you have to have on the field. You can see every time they win they really want it, and that’s just really inspiring,” Caden said.

This game was the last regular-season home game for the Eagles, but they may be returning to Davis Field during the playoffs. They play away at Menlo tomorrow, with their playoff aspirations resting on their victory.