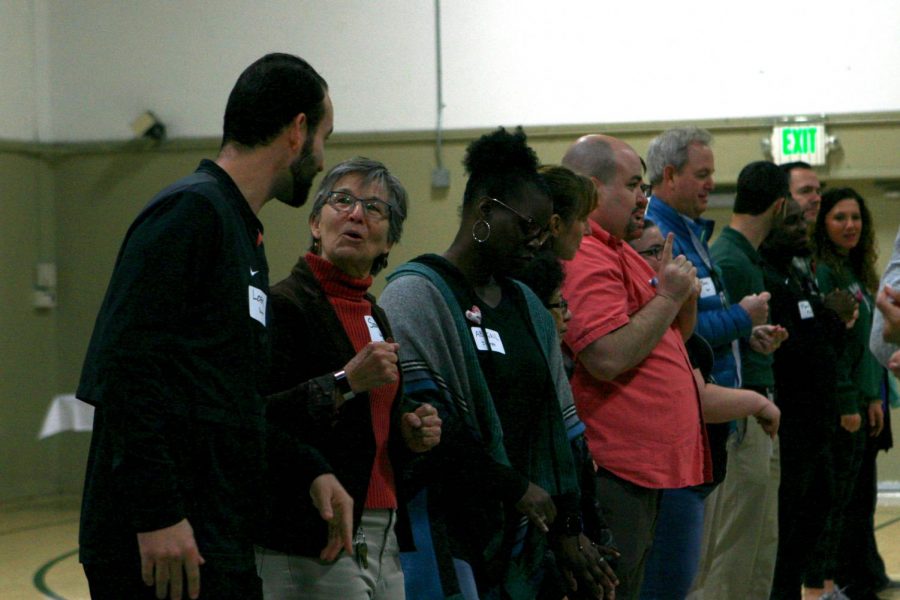 Teachers line up at the end of the faculty meeting in the morning and practice their favorite dance moves. Whenever a Challenge Day leader shouted "We're about to play a game," participants began dancing.

by Nicole Tian and Sarah Mohammed

The double doors on the far side of the auxiliary swung open to welcome a stream of students who jumbled their way through a tunnel of dancing faculty members, the upbeat music mixing with laughter and high-fives. Despite the early morning, all the participants of Challenge Day joined in, pumping their fists and springing up to the center of the room to hold a dance party when the leader hollered, “We’re about to play a game!”

Challenge Day was held on Feb. 6 from 8 a.m. to 3 p.m. in the auxiliary gym with 100 students and 20 to 30 members of the faculty attending, led by two members from the anti-bullying program with the same name. This event focused on mindfulness and centered around Challenge Day’s motto, a quote from leader of the Indian independence movement Mahatma Gandhi that reads, “We must be the change that we want to see in the world.”

Registration for the workshop was limited to 80 to 100 students, and members of student council and honor council were further encouraged to attend by Dean of Students Kevin Williamson.

Head of Upper School Butch Keller announced the event at a meeting on Jan. 13, addressing incidents of racial slurs and rude remarks that compromised the school’s tenets. As the necessity to foster conversations related to those incidents has grown, members of the faculty and administration decided to bring the program to the upper school as a reaction to bullying on campus.

The day was broken up into various activities before and after lunch. Students were welcomed in after a faculty meeting with the Challenge Day leaders from 8 to 8:30 a.m. Participants then engaged in introductory games for the next half an hour before breaking off into “family groups,” which each included four to five people both from the students and faculty who bonded throughout the rest of the day.

Founded in 1987 by Rich and Yvonne Dutra-St. John, Challenge Day has since held events in 2500 schools over the past three decades for about 1.5 million students and adults in all the American states and Canadian provinces as well as Japan, Germany, Uganda and the Netherlands.

Upper school math teacher Dr. Lola Muldrew, who was one of the faculty members participating this year, attended a Challenge Day workshop in the early 2000s. She first proposed the idea a couple of years ago to target issues regarding empathy, diversity and racism at school.

“Their leaders are really well trained to get people to open up, break down their walls and see their connection to other people through doing fun things together and then having important conversations together,” Dr. Muldrew said. “What’s important is that when you are listening to someone else, you are holding space for that person and you’re letting them be seen and heard.”

One of the major themes of the event was recognizing the similarities between people in the community that do not often interact, a belief incorporated in the activity titled “If you really knew me,” which takes place in the smaller groups. Each member shares his or her own experiences by beginning with the phrase “if you really knew me know that” while others in the circle show support through their attention. The leaders emphasized the importance of forming a comfort zone to assist everyone in feeling more comfortable with accepting their struggles and showing vulnerability.

Another of the most impactful exercises of Challenge Day is “Cross the Line.” Participants stand behind a marked line on the ground, as the leader calls out categories pertaining to experiences that people have gone through, occasionally including topics related to oppression and discrimination.

For some students, Challenge Day presented an opportunity to reconcile differences between members of the community who may not have interacted otherwise and encouraged transparency about personal struggles.

“I’ve been dealing with a lot of issues around the school regarding race, so I was hoping to come to this and to see some of my classmates here to get a perspective on them,” Brian Pinkston (11) said. “I saw some of the people who had been racist to me in a new light. It helped humanize both of us because we found out that we had gone through a lot of the same struggles, and that really brought us on the same side and taught us to stick together through this.

Even after the event has passed, the goal of Challenge Day is to extend those lessons to everyday practice.

“[The goal is to] have students become more confident about defending somebody who is being bullied, step up and observe when things are going on and [know] that they can speak up to adults about it and feel protected doing that,” Dr. Muldrew said. “Know that it is safe to stand up for yourself and it’s safe to stand up for somebody else, that you’re safe to go and reach out for help, so that somebody can help you be that ally or be that advocate.”

Students who attended feel that such events encourage empathy and inclusivity and are opportunities for the school and administration to “realize that diversity and creativity are really important,” as Uma Iyer (10) describes. Uma appreciates events such as Challenge Day to further explore diversity in the Harker community.

Various students also noted that they would like to form bonds within the community by continuing to hold similar events in the future.

“I also hope that the administration sees the need for more programs like Challenge Day, but on a consistent basis that can be implemented into the community and really build up the Harker community to be more inclusive and more supportive of each other,” Natasha Yen (11) said.