Humans of Harker: Embracing everyone 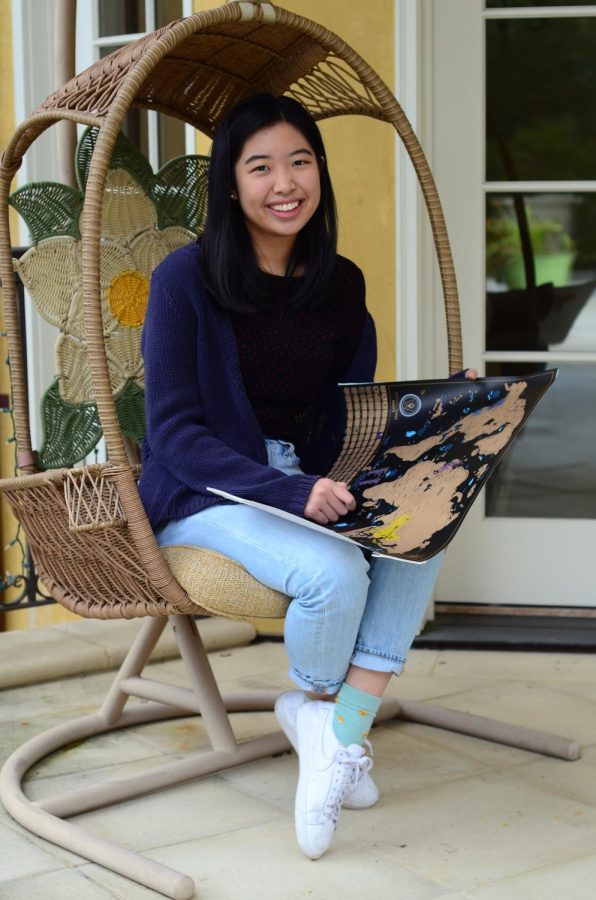 “Talking to all these people [from around the globe] opened up my eyes at a young age. There’s a lot of respect going around for each other’s culture [in places around the world], and that shaped my mind in how we want to embrace everyone. That’s why I really hope to tear down stereotypes and also try to encourage others to tear down stereotypes because it really limits how we interact with each other,” Gloria Zhang (12) said.

Leaving gritty, miniscule shavings in its wake, a shiny quarter bears forth its rough ridges to scrape the opaque coating on a scratch map. With sleek black hair hanging like a curtain over the side of her face, Gloria Zhang (12) directs this unveiling of all the countries in which she has lived: New Zealand, Australia, China, Canada and the United States.

Gloria’s upbringing is the near definition of the word “international.” Although she was born in Auckland, New Zealand, Gloria constantly moved back and forth between there, Shanghai and Hong Kong all before the age of three due to her parent’s work and family reasons. She then relocated to Vancouver for one year before returning to Australia for three. From there, her family moved back to Hong Kong, where Gloria finished elementary school at a British international school.

“My friends still make fun of me for pronouncing ‘golf’ wrong. I don’t even know which accent I carried with me,” Gloria said, laughing. “The accent I had in elementary school was a whole mess—I spoke with a jumble of Australian, British accents mixed with a little American.”

After lower school, Gloria relocated once again to Shanghai for sixth grade before she and her family migrated to the Bay Area, where she has lived ever since.

“I am very appreciative [and] grateful for being able to be in a family that has a lot of friends around the world and be in a socioeconomic status that is easy for us to move to a new place and not worry about a lot of jobs or housing,” Gloria said.

Moving to America, however, was the first time her family had no relations with anyone in their new place of residence. Beyond struggling with her personal difficulties of adjusting accents and making new friends, Gloria was forced to become more dependable in order to help her family acclimate to a foreign country with a foreign culture.

“My parents’ English isn’t very good, so communicating with people in Bed Bath & Beyond or just these things that normal 12-year-olds wouldn’t be doing, like buying furniture, [was a new experience],” Gloria said. “Coming to the U.S. has taught me to be more independent and think more about my family as a whole and what we like to do together, what we want and what we need.”

Gloria’s older brother, Jeff Zhang, attested to his family’s reliance on her, especially during the time when her mother became sick.

“The family forced a lot of burden onto her, but she really did a good job,” Jeff said. “Our mother got ill half a year back, and Gloria pretty much handled everything for our mother, even doing translation for my mother’s business and taking care of the household.”

The first way that Gloria acclimates to a new environment is by learning the customs and conventions through new friends.

Despite the difficulties she has faced because of her global travels, Gloria’s international journey has formed an appreciation of different cultures and a repudiation of prejudice within her.

“Talking to all these people [from around the globe] opened up my eyes at a young age. There’s a lot of respect going around for each other’s culture [in places around the world], and that shaped my mind in how we want to embrace everyone,” Gloria said. “That’s why I really hope to tear down stereotypes and also try to encourage others to tear down stereotypes because it really limits how we interact with each other.”

Gloria’s awareness of different ways of life and circumstances reflects her interest in hearing the stories of other international people.

“I like to look at articles or talk to people who share experiences in immigration or just moving about a lot because I think it’s really interesting to hear everyone’s experiences,” Gloria said. “I had such a weird upbringing moving around about, and a lot of my friends here didn’t, [so] I like to search for other people who share similar experiences.”

Aditi Khanna (12), a close friend, maintained that Gloria was the cause of a new “sense of adventure” for her.

“[When I first met Gloria,] she was telling me where she was from, and it was all these places. I’m like, ‘I haven’t been to a single one of these,’” Aditi said. “She brought that out of me — that want to explore other places. I had to be this person of the world, and I wasn’t like that at all, [but] she really was.”

Besides instilling curiosity about the world in others, Gloria is also a caring, selfless friend.

“If I have a problem, I know she’s there for me. it’s really nice having someone who’s so understanding, and she’s really empathetic and knows the right words to say in situations,” Alyssa Huang (12), a close friend of Gloria, said. “She does things and never expects for you to do anything in return.”

After graduating Harker, Gloria will have lived in the Bay Area for six years. Perhaps as a result of her transient childhood, Gloria is excited to face new surroundings in the future.

“I am happy to experience a new place now because I think I just can’t sit still. I really like to move around and go to different places,” Gloria said. “By going to college by myself in a new area, I think that’s my new way of seeking adventure.”