Humans of Harker: Artist by hand, enthusiast by heart

Ashna Reddy (12) transforms the impossible into the tangible 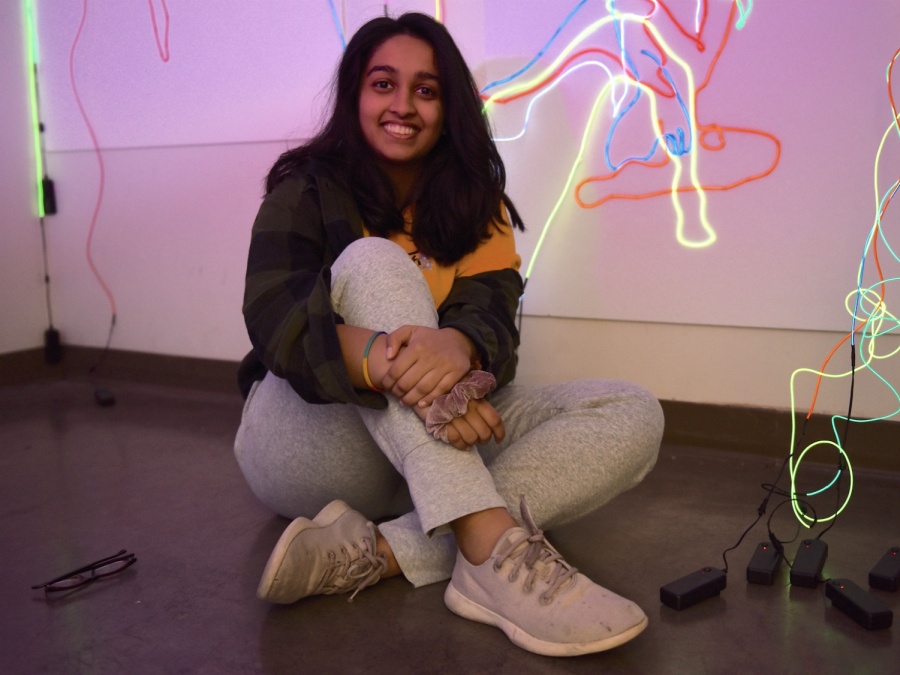 “I like to make things that you can touch and feel, where the piece itself is a tangible physical object and my audience [can] interact with my art. For my Shah gallery, people can push the buttons and change the colors and play with the colored shadows, where your body is the shadow and you become the art. I think that's so much more interesting than just something that you stare at or something that's very one-sided,” Ashna Reddy (12) said.

Quirky, relatable and always 100 percent herself.

Ashna Reddy (12) is a color enthusiast, a romcom connoisseur and a self-taught architect and interior designer. In her freshman year, she moved to the U.S. for high school after spending the first part of her life in India. In her sophomore year, she proudly dressed up as a fidget spinner for Halloween. As a junior, she enrolled in a two-week training camp, on a spontaneous whim, to climb to Mt. Everest’s base camp.

Ashna’s “why not?” personality sprinkles her everyday life with a different adventure and allows her to experience the big, little and everything in between that life has to offer her. Ashna finds ways to incorporate her lifestyle into her artwork and vice versa, morphing her vision into sculptures and structures that give an interactive 3D experience rather than just flat shapes on paper. In turn, behind every new art project, Ashna always keeps her mind open to explore and test the limits.

Although born in the U.S., Ashna moved to India when she was five years old, spending most of what she calls her most “transformative” years in India before moving back to the U.S. for high school.

“Because I’ve moved so much and experienced so much, I feel like it’s forced me to adapt more, so I’m a lot more open in my artwork and willing to explore different mediums and different things. I feel like if I hadn’t moved I wouldn’t be as open to trying new things as I am,” Ashna said.

Between India and the U.S., Ashna feels that there are both drawbacks and benefits to her life in each country, but claims that the experiences she had in India were what “defines [her] as person today.”

“I always had this vision of America as this super cool open place where everyone drinks Starbucks here and whatnot and basically the very stereotypical outlook, even though I was an American citizen,” Ashna said. “But truthfully, I’ve always felt Indian. But having an American accent in India, since I grew up here, was really weird because when I was in India, I felt American but [in America] I feel super Indian.”

Instead of feeling split by two varying cultures, Ashna embraces both as a part of her that broadens her life experience, which, to her, are “much richer together than one.”

“There’s definitely a bubble at Harker, where everybody is somewhat in the Silicon Valley mindset of things, so having lived in India and moved around a lot has given me a broader experience,” Ashna said. “Coming to Harker, [there is] such an openness and willingness in the community to listen to each other and so much respect between teachers and students that I don’t feel the need to be as outspoken here as I was in India.”

“She’s the kind of person that just takes on challenges because she’s told me when people ask her ‘why?’ she always says ‘why not?’ And I’ve sort of taken that on like to some degree a little bit more in my life because there is no reason not to,” Nellie said.

Ever since moving, Ashna realized her value of explorations and experimentation was to deepen her opportunities at human interaction and connections, which she believes to be the essence of everything. She now puts this mindset to her every decision, especially in her 3D artwork. As an honors structure portfolio student, Ashna’s Shah art gallery featured her newest creation: a tangle of neon LED lights that allow the viewer to not only visually admire the glowing rainbow but also enjoy an immersive and entertaining hands-on experience.

“I like to make things that you can touch and feel, where the piece itself is a tangible physical object and my audience [can] interact with my art,” Ashna said. “For my Shah gallery, people can push the buttons and change the colors and play with the colored shadows, where your body is the shadow and you become the art. I think that’s so much more interesting than just something that you stare at or something that’s very one-sided.”

Nellie also notes that Ashna possesses the ability to appreciate the different aspects of art and never fails to support Nellie as both a fellow artist and a close friend.

“I’m really proud of her for finding her creative voice and style and the work that she likes to create. The things that we create are totally different from one another, but we’ll always go hang out in the art room and support each other,” Nellie said. “We’re different people and we both think the work that the other does is interesting and that’s what brings us together, more than just the fact that we do the same things.”

Compared to artists who have been honing their craft since grade school, Ashna actually began her own journey in high school. Only after taking the study of visual arts course in her freshman year with upper school art teacher Pilar Aguero-Esparza did Ashna discover her ardent affinity for tangible structures, architecture, and interior design, leading her to take sculpture and stone carving courses.

“You know, I thought that she was quite mature for her age as a ninth-grader, and I think what I am excited to see now is how much her thinking as an artist has expanded,” said Aguero-Esparza. “It’s pretty impressive that she’s so expressive about her ideas, and that’s not common with artists. I think it’s rare to find a student who is very already inspired to create works and has a lot of ideas to go along with it.”