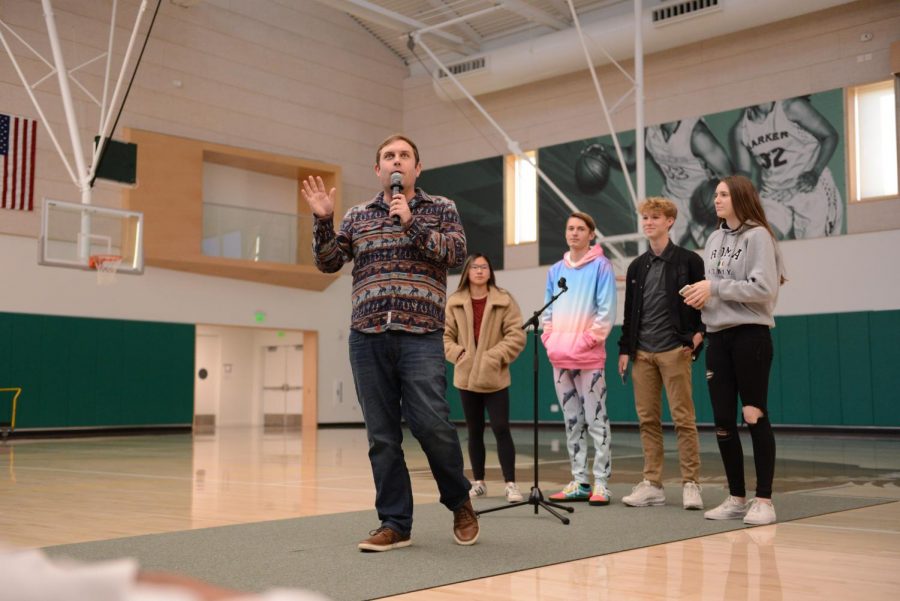 David Feng (12) started off the first school meeting of the semester last Friday by congratulating the class of 2020 for being second semester seniors.

Red Cross Club will be having their club week the week of Jan. 27 to Jan. 31, and they will be selling donuts and iced coffee. Those who bring a reusable cup will receive a discount. All proceeds will be going to help those affected by the fires in Australia. Red Cross Club will also be having their blood drive on Feb. 19 in the Nichols Atrium from 8:30 a.m. to 3 p.m. Students who are 16 years old can donate with parental permission. Students who are at least 17 years old can donate.

Medical Club will have its club week the week of Feb. 3 to Feb. 7, and they will be selling boba, popcorn chicken and iced coffee.

Sana Pandey (12) and Ellen Guo (12) announced that Outlook Pals would be having its second wave. Students who sign up at harker.io/1920outlookpals will be matched with an international student in Shenzhen, China and will have the opportunity to help their penpals with their English.

Jason Lin (11), Alex Lan (9) and Dawson Chen (10) announced new initiatives on behalf of student council. They announced Friday Five, wherein from now on, student council will be sending out a survey every two weeks with five new ideas for students to rank. They also announced an online suggestion box at tiny.cc/propcomp. Student council is also planning on building a whiteboard outside the library for the purpose of showcasing events that student council is working on and increasing transparency.

Student council performed a skit written by William Chien (10) to announce Valentine’s Day grams. The grams will cost six dollars each and will be sold during lunch starting on Monday, Jan. 27.

“Shoes don’t have to be fancy or expensive [to be featured in the yearbook],” Carter said. “All your shoes are valid.”

On behalf of the food committee on student council, Calais Poirson (11) and Montek Kalsi (12) announced that food trucks will be available during semester two after school. The first food truck is Friday, Jan. 31 from 3-4 p.m. Crepes will be sold.

David ended the school meeting by delivering the nostalgic line, “Class starts at 10:50, all dismissed.”