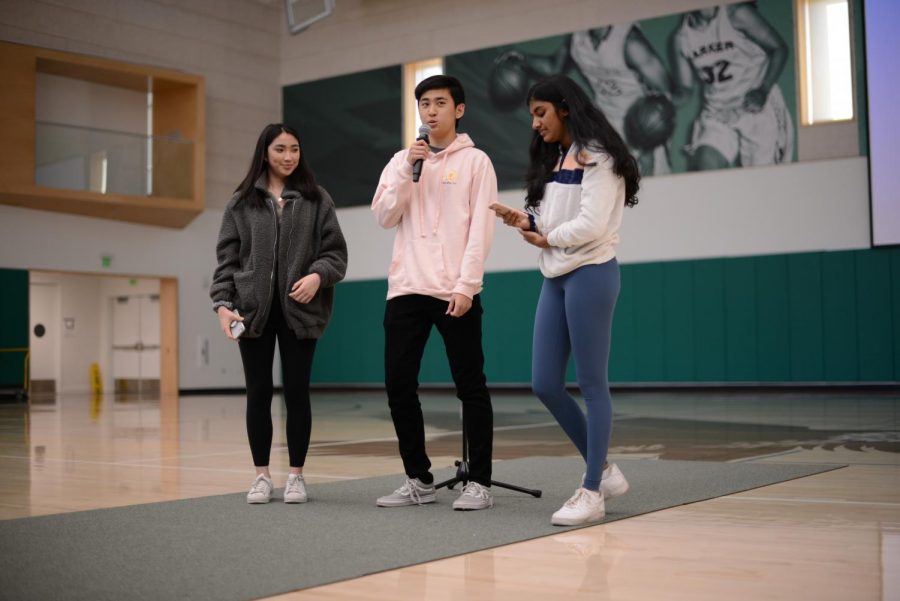 TALON yearbook editors-in-chief Emily Chen (12) and Anthony Xu (12) and TALON managing editor Shreya Srinivasan (11) announce that all yearbooks from this year onwards will be free to all students and faculty at school meeting last Friday.

Avi Gulati (12) welcomed everyone to the last school meeting of the semester.

On behalf of the performing arts program, Annabelle Ju (12) announced the Winter Concert, which was on the night of Friday, Jan. 17 at 7:00 p.m. in the Patil Theater. Upper school lab band, jazz band and orchestra all performed, and tickets were free.

Aria Wong (11) and Ashley Barth (10) from the girls soccer program thanked those who came out to support Camp Okizu during Kicks for Cancer on Friday.

Meona Khetrapal (11) and Adhya Hoskote (12) gave the Eagle Update. Girls basketball defeated Notre Dame San Jose 47-41 on Thursday night, improving their record to 8-7 overall. Boys basketball fell to Eastside College Preparatory 65-55 on Thursday night, and their record is 6-9 overall right now. Boys soccer won 4-0 against Crystal Springs on Wednesday, improving to 7-1-1 overall, with seven wins, one loss and one tie. Girls soccer won 3-1 against Pinewood on Thursday, with their record being 6-0-3 overall, with six wins, zero losses and three ties.

Upper school English teacher Charles Shuttleworth announced the annual Shakespeare monologue competition taking place on Feb. 21 at 12:45 p.m. in the Nichols auditorium. Students may choose monologues from the official list. To obtain a copy of the list, stop by Shuttleworth’s or upper school theater teacher Jeffrey Draper’s room. The Harker winner will compete in the regional competition in San Francisco on March 7.

Joel Morel (12), winner of the competition at Harker last year, performed as Mercutio from “Romeo and Juliet” at the school meeting.

Aditi Ghalsasi (12) announced a mock interview workshop, hosted by Career Connect, that took place during long lunch last Friday. Students were able to sign up for mock interview time slots. Five professionals came in to host the interviews and gave feedback on improving communication skills in an interview setting.

Annie Ma (12) and Amla Rashingkar (12), the editor-in-chiefs of Harker Eclectic Literary Magazine (HELM) Club, announced that HELM had opened its submissions for the 2020 digital and print issue. The theme for this year’s issue is nostalgia. Students should submit their works to [email protected]. Deadline to submit is Feb. 10. Works will be judged anonymously.

Annie and Amla also announced that the school week of Jan. 21 to Jan. 24 is the club week for HELM. Bundt cakes will be sold.

Alex Shing (12) and Sachi Bajaj (12) from the Green Team announced an environmental spirit event taking place on the school week of Jan. 21 to Jan. 24. Students will compete for class spirit points by submitting pictures of them partaking in sustainability. Students can submit photos either through email or by tagging Harker Green Team on an Instagram story. Those who submit photos will be entered into a raffle for a water bottle. Each day will have a different challenge, with Community Service Tuesday, Pick Up Trash Wednesday, Thirsty Thursday and Climate Influencer Friday. Alex and Sachi also encouraged students to drop off jars between 20 and 24 ounces in upper school Spanish teacher Diana Moss’ room.

Director of Standardized Testing and Scheduling Troy Thiele reminded students to have consistent course selections in the Google form and in their academic plan in Infinite Campus.

“Think of Skylar [Thiele’s son], think of yourselves in the wrong class next fall, whatever it takes to motivate you, and double check [your course selections] to make sure they’re consistent. It would help me out a lot,” he said.

Emily Chen (12) and Anthony Xu (12), editor-in-chiefs of Talon, and Shreya Srinivasan (11), Talon managing editor and business manager, announced that all students and faculty would now be receiving yearbooks for free. Personalization will be included complimentary of the Talon staff. Seniors with parents who purchased a separate personal display ad will be charged for the same amount as before.

The senior council announced details of the Winter Ball. The event is Saturday, Jan. 25 from 7:30 p.m. to 10:30 p.m. Doors close at 8:30 p.m. and early release is at 10:00 p.m. All student parking is in the RPAC lot. Freshmen and sophomores should be picked up in the RPAC lot, and juniors and seniors should be picked up in the Manzanita lot. The council also announced that students will be expected to abide by the guidelines in the community handbook.

Avi announced on behalf of the student events committee that the deadline to submit acts for Hoscars is next Monday. He ended the school meeting by reminding students to stay warm.