Cattle and carbon: Why I chose to stop eating beef 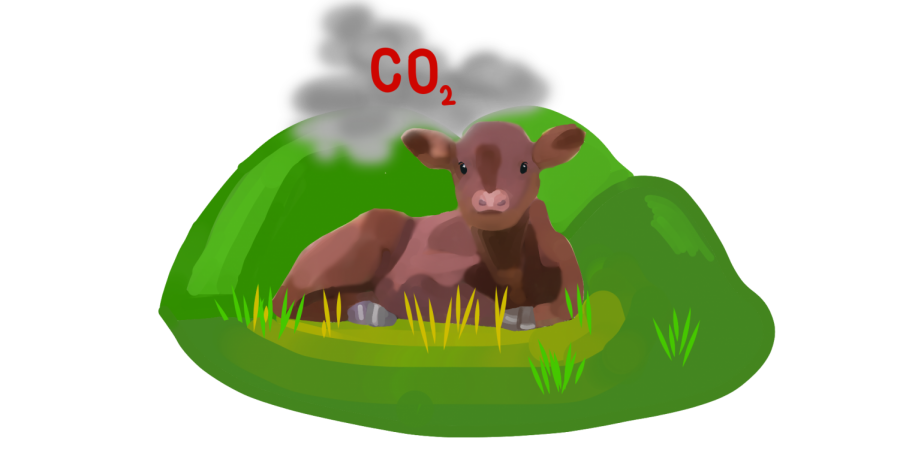 An expanding animal agriculture industry leads to deforestation to open up new lands, but by cutting down on customer demand by either eliminating or minimizing personal beef consumption, the impact is twofold: forested lands are protected, combating the effects of CO2 emissions, and methane produced by cattle farming decreases.

At the 2019 UN Climate Action Summit held on Sept. 23 in New York City, one speaker’s words were particularly convicting. In a YouTube video from Guardian News, 16-year-old Swedish climate activist Greta Thunberg boldly declared to world leaders, “Right here, right now, is where we draw the line…change is coming.”

To me, the change has already begun. Especially over the past year, with the global climate strike on Sept. 20 and the ongoing bushfires across Australia, I have grown more aware of the impacts that climate change could possibly hold in our future, particularly those caused by greenhouse gas emissions, trapping heat in the atmosphere and causing global warming.

Out of all the possible options to decrease carbon emissions such as unplugging devices, switching to electric cars, minimizing waste from shopping or avoiding air travel, I found that their benefits and losses were difficult to measure. Compared to the other options, I chose to instead eliminate beef from my diet as it was the easiest factor to control.

Raising cattle is especially taxing on the environment due to the sheer amount of land required for livestock to graze. Animals utilize about 26% of ice-free land for grazing along with another 33% to produce feed for the livestock, according to the Food and Agriculture Organization (FAO). This phenomenon is especially prominent in Central America, where the FAO reports that 40% of former rainforests have been transformed into pastures between 1961-2000.

Compared to the 29% of emissions from the transportation sector, agriculture led to 9% of U.S. greenhouse gases in 2017 according to The United States Environmental Protection Agency (EPA). Due to the rise of the cattle industry and little regulation, ranchers have even been linked to the fires in the Amazon last year, and the Yale School of Forestry and Environmental Studies reports that cattle ranching has accounted for up to 80% of deforestation rates in the Amazon countries.

An expanding animal agriculture industry leads to deforestation to open up new lands, but by cutting down on customer demand by either eliminating or minimizing personal beef consumption, the impact is twofold: forested lands are protected, combating the effects of CO2 emissions, and methane produced by cattle farming decreases.

I first came up with the idea of making dietary changes near the end of August last year, when I found myself reflecting upon the patterns of wildfires across California in recent years, namely the Camp Fire in Butte County. Parts of the sky in the Bay Area was muddled with ash, and the usually brilliant sun was marred with a permanent, unsettling sunset. A few students wore masks with air filters, many of us wore N-95 masks and all of us stayed inside. Words such as “firestorm” and the terrible irony of a burning Paradise had wormed their way inside my content lifestyle, and I was now more interested in taking on the task of preventing future climate catastrophes rather than simply sympathizing, maybe donating and moving on.

On the way to art class, I declared to my mother that I was taking on a new initiative of ending beef consumption, which we ate about once every few weeks. After asking me what prompted the sudden change, she relented to my request that we entirely stop purchasing beef products, ending steaks and short ribs. Instead, we have been taking more trips to the local farmers’ market and go vegetarian for some meals

The company Impossible Foods, founded in 2011 by current chief executive Patrick O. Brown, provides plant-based alternatives for meat. One of its major products is the Impossible™ Burger, a burger made from a combination of potato and soy proteins. Fast food chains such as Burger King have added meat-free items such as the Impossible™ Whopper to its menu, adopting a more environmentally conscious mindset.

And I would like to encourage you to do the same. From eating beef once a day, to once a week, to once a month, or completely eliminating it from your diet, I believe that changing your standard can result in a ripple effect that extends beyond your immediate community, eventually resulting in an impact on the beef industry. It could be bringing a reusable water bottle, switching to toxin-free soap to prevent polluting waterways or carpooling to reduce emissions per individual. So, like Greta, speak out about changes you decide to make, and start your own movement by using your platform to reach others. Right here. Right now.