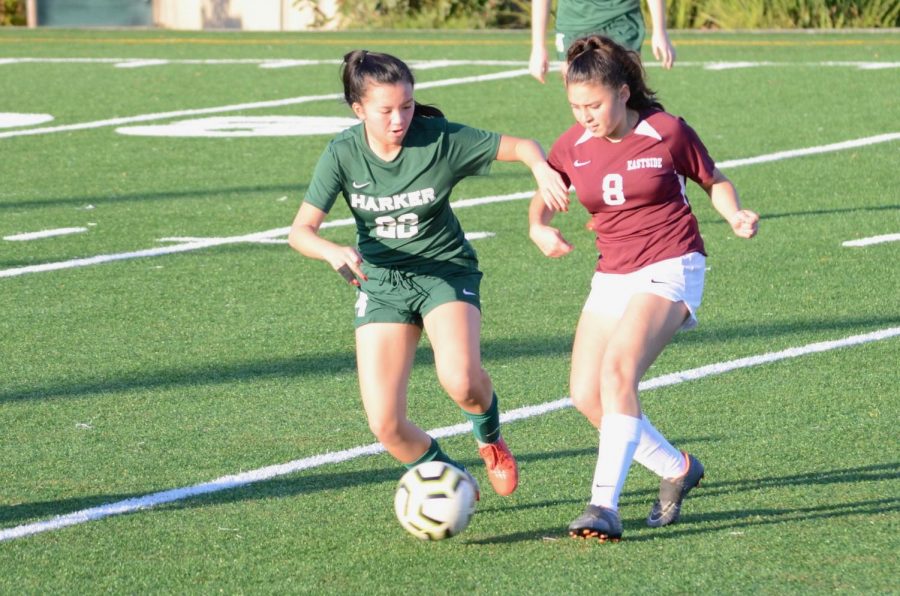 Aria Wong (11), co-captain of the varsity girls soccer team, holds her arm out in front of an Eastside player, attempting to block her from stealing the ball. The Eagles defeated Eastside 8-0 last Tuesday after an impressive game, their first league match of the season.

by Sally Zhu and Athreya Daniel

Varsity girls soccer defeated Eastside 8-0 last Tuesday after an impressive game, starting the regular season off with a win after an undefeated preseason record of 3-0-2. This is their first league game.

“We’re all pretty strong players. We have some great senior fire power this year… [Our goal is] to win league,” Lexi Wong (9), who scored two goals in the game, said. “Last year, we were pretty close and now that we have a bunch of good freshman, I think we can do it.”

The Eastside soccer team does not have a home field, so this game was played as an away game for Harker. Minutes after it started, Cassie May (9) scored a goal, quickly following this with another goal before the end of the first half.

“The team did a good job possessing the ball and passing to each other. They just took a lot of shots and had good ball control,” Teana Wong, a Harker parent who watched the game, said.

The next three goals were all scored by sophomore Megha Salvi, earning her a hat trick, which is when a player scores three goals in one game. Following this were two goals by Lexi and one by Emma Boyce (11).

“There were a bunch of great plays today. Megha took the ball from our own 45 and scored a goal all the way down the field. Lexi [scored] a nice goal from the left side of the field and put it top right side. A lot of our girls scored multiple goals and there were alot of great plays,” head coach Iman Siadat said.

Their next game is next Tuesday, against Crystal Springs Uplands at 3:30 p.m.